The view from Clarium

Some interesting graphs from Clarium's August 2009 commentary. Clarium is the hedge fund run by Peter Thiel, of PayPal fame. (Click for larger images.) 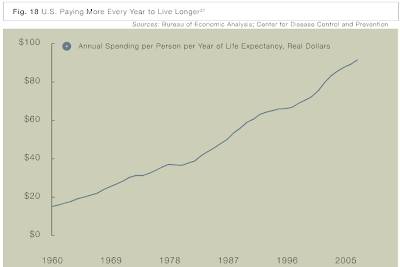 The real cost of primary + secondary education has risen 3x in the last 30 years, but has this resulted in improved human capital? Not if judged by average (real) wages. (Or, perhaps the fruits of productivity gains have been stolen by the rich? The top 1% of wage earners have done extremely well over the same period :-) 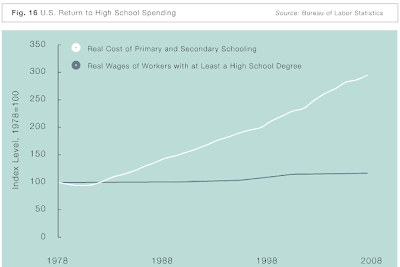 Who is shaping the future? Global venture capital investment is dominated by the US, with China almost equal to Europe ex-UK. Israel is tied with the UK and leads on a per-capita basis. 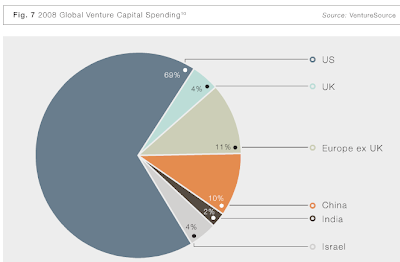 The US is a shit hole. Not news to me.

Japan's absence from that graph is interesting.

Average wage numbers very tricky -- what's here is more misleading than useful. If you'd like something better, let me know.

Dave: would love to hear your take on this question.

We are clearly paying more in real terms to develop human capital. Is it working?

Do you think median earnings have stagnated in the last 30 years? Who benefited from the significant real GDP increase over that period of time?

Before I forget, I love your blog.

On this issues at hand: one of the things about economic data (maybe physics, too, I don't know) is that you have to be careful about what you're measuring. Maybe this is more than you want, but it may whet your appetite for more -- or the opposite, who knows. I'm not an expert on these particular issues, but I think the following would have general acceptance among experts:

Average wages. There are lots of claims like "the median worker's wage hasn't gone up in 30 years." What I think we know:
(i) Total compensation has gone up a lot, so averages must have, too.
(ii) Fringe is a larger part of total comp than it used to be, so if you miss that you're missing a lot. Think of the cost of health insurance. My guess is that the numbers in your figure don't include fringe.
(iii) The comp of the median worker has gone up a lot, but probably not as much as the average. You're right, the top 1% is part of the picture (it's gone up more), but I don't think it's enough to undo the gains at the median. Also: the very poor have done relatively poorly, so to speak.
(iv) Many of the references to similar facts are for households. The issue here is that the average household now includes more single parents than it did in (say) 1975, which reduces household income simply by splitting it. This is a big effect, but it's more about the nature of households than about income.
(v) There's potentially a similar composition effect in median compensation. We tend to think of these as the same person through time, but of course it's not: the median person may be very different now than then.

Education: I think the quantity is more interesting than the price, but would be happy to talk about either one. James Heckman argues that high school graduation rates have been flat to falling since the late 1960s. Not clear why this is, but it's an issue for sure.

Human capital is not developed through formal education. Formal education, the scam Steve is a part of, has more in common with tobacco, fast food, drugs, and pornography than it has with wealth building.

It may surprise Steve that even in the case of engineering very little of what is learned in school is ever used on the job.

Steve, ever so often you write about careers and also IQ, so you may find this interesting. Sorry that it is a little off topic but here it is.

There are dozens of jobs that can provide someone with an average IQ (normed @ 100) an opportunity for a middle-class lifestyle or even upper-class lifestyle, for that manner -- but getting on the right career track early on is important.

Someone with an IQ of 100 will be disadvantaged in some occupations but nonetheless has the *capability* of being any of the following: college professor, electrical engineer, accountant, social scientist, high school teacher, etc. It appears that someone with an IQ of 100 simply cannot be an MD, however. My information comes from the IQ bands which appear on this page:

Robert Hauser's "Meritocracy, cognitive ability, and the sources of occupational success" (2002) paper ( http://www.ssc.wisc.edu/cde/cdewp/98-07.pdf ) has a graph which points suggests that you only need a minimum IQ for the following professions:

So what does this all mean??

Answer: If your IQ reaches the minimum for the above occupations they are within your mental reach; since the incentive is a middle to upper-class lifestyle, there is no reason to not pursue the aforementioned occupations if they are of interest.

Some of the occupations, such as professor, might be a little misleading since it clumps together physics professors & education professors, but interesting nonetheless.

Dave: Thanks for the links! I've followed Heckman's work on and off over the years. I guess there are two issues I was raising with the 2nd Clarium graph -- one is how the median worker has fared in recent decades (i.e., income inequality) and the other is the human capital question (what are we getting for our high education spending?). Even if the flat median earnings result is misleading (I think your first link does a good job of clearing things up), it still seems true that the cost of education is going up way too fast (+4% p.a. in real dollars over 30 years!). I often hear this about higher education and was a bit surprised to find it was true of primary + secondary as well.

Sam: I suggest you think about how those psychologists deduce those IQ bands for different jobs. Do you think there is any uncertainty in their results? I agree with you that "professor" is a pretty broad category ;-)

On human capital: over the last 30 years or so, we've seen two pretty striking developments. The first is that within a groups with similar education, the dispersion has gone up. The second is that returns to education have gone up: the premium (in wages terms) of more education is higher than it used to be. I agree with the comment above that quality matters, too, but even in crude data this shows up clearly. I'd guess if we measured education better the result would be stronger.

Ask yourself: would you be willing to spend more money to get your kids into a better school? If you say yes, there's your answer. You might ask Thiel where his kids go to school. If we're talking public education, that's another matter. I have little doubt, living in NYC, that lots of taxpayer money is wasted in the school system. It's a real shame.

Dave B. - I love your stuff, you are clearly a dude who knows what he is doing ...

On the Clarion health care observations - the U.S. congress is busy crafting legislation that will add at least $200 bio of health care spending per year, and probabably much more. However, have the advocates of these laws suggested we'll get an increase in longevity (the favored metric) as a result? I don't think health care spending and outcome are related in the U.S...

Making a living in large part from from tuition

Making a living taking close up shots of rectal intercourse

However, I do not think, for me, that your comments add to this discussion. If Steve wants to exercise a bit of editorial censorship here, I think it is justified.

I suppose the air smells sweet in the City, amorality has its benefits.

But you're still part of the herd LY, and that sweet smell is the smell of ordure.

I might gladly 2x my educational spend to increase my "wages" by 50%. Depending on the ratio.