Sorry for the lack of posts -- I just returned from China, where blogging had to contend with the Great Firewall and a busy schedule. Below are some pictures from the trip -- click for larger versions.

Our "expedition" was led by a world famous Harvard mathematician, and included professors of economics, statistics, computer science and physics. The opportunity: to create a social science institute to observe and model the Chinese economy in real time using massive electronic data sets. 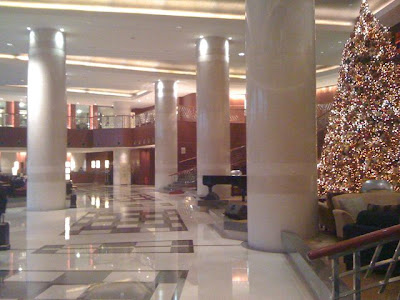 Alibaba Group Headquarters in Hangzhou. I'm under NDA so I can't say too much, but the Alibaba Group is an impressive set of companies. The transaction volume on their Taobao (EBay-like) C2C site is estimated at around 2 percent of all retail sales in China this year, and should reach 5 percent within a few years. There are roughly 150 million users and 400 million items listed! All of the university students we met were Taobao users and many said it was their preferred method of shopping. 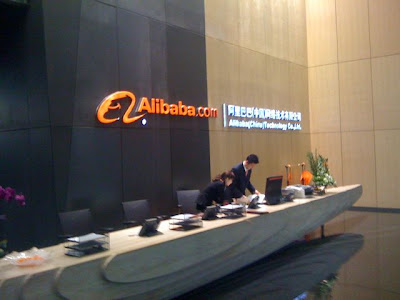 [I had some other photos of Alibaba headquarters here originally, but I guess I violated some corporate policies and they asked me to take them down! Below are some official photos of their building.] 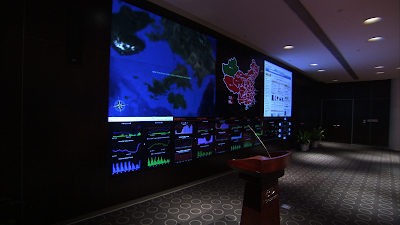 Beijing: Wenjin Hotel in Tsinghua University Science Park -- next to Google China and Microsoft Research. If you squint you can see the Google logo in the picture below.

It was cold and windy in Beijing, but as a consequence we had sunny days with little noticeable air pollution. (See here for an air quality Twitter feed from the US embassy in Beijing. We did indeed have good air during our visit.) Traffic is, however, horrendous! 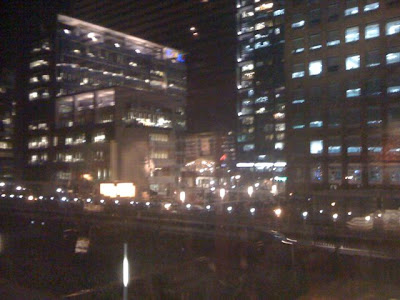 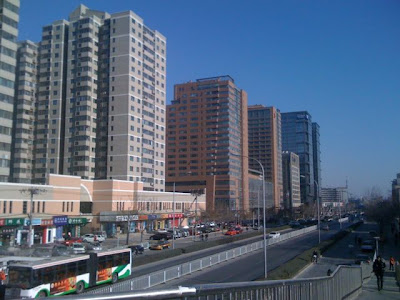 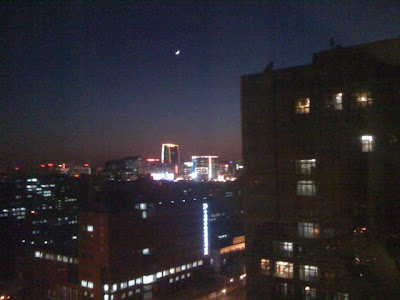 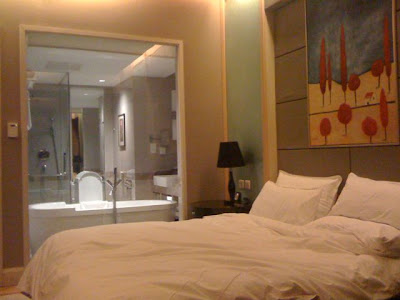 Our hotel was in Zhongguancun, the Silicon Valley of China, which includes the top two universities: Beijing University (Beida) and Tsinghua University. The leader of our expedition presided over the opening ceremony of the Tsinghua Institute of Mathematical Sciences. The hotel was crawling with world class mathematicians!

Below is a picture taken in the immense consumer electronics market in Zhongguancun, about a 20 minute walk from our hotel. Enter any of the buildings in this area and you'll be confronted with an army of salespeople trying to sell you laptops, cellphones, etc. 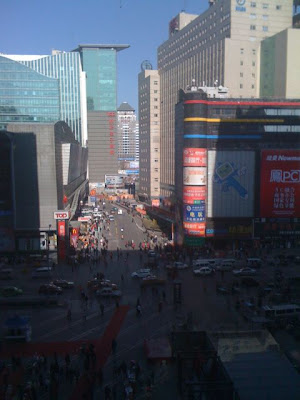 Ministry of Commerce. This meeting took place in a less affluent region of south Beijing where locals still burn coal for heat. For this reason, and because the region is in a slight valley, they tend to have a few bad air days a week, including the day of our visit. I could smell a distinct sulfurous odor in the air, and my eyes stung. The air quality provided a jarring contrast to the opulent surroundings at the ministry. 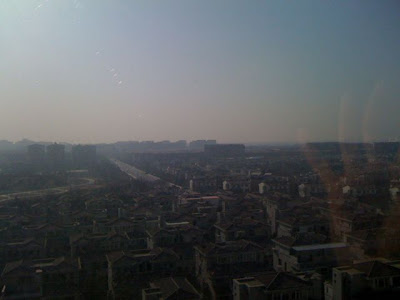 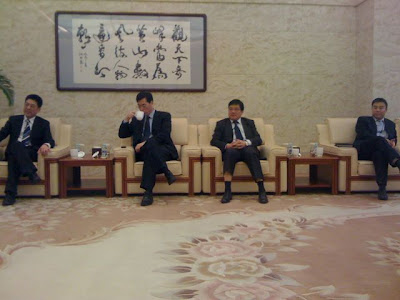 During a night off from lavish banquets and dinners in private dining rooms, I managed to meet with blogger maoxian, an expat Beijinger with a lot of insight about life and business in China.
Posted by Steve Hsu at 12:59 PM

Question for you Steve - the Atomic physicists in days of yore worried about their complicity in the development of atomic weapons, and many of us in finance contemplate our value to society. How does it feel, to you, on the other side of the Great Firewall? Is "our" engagement "over there" a force for good or evil? Or just a force?

I think engagement is a force for good. It's amazing how fast China is changing.

I often worry that if ever Orwell's vision of 1984 was to come true, that China was the spot. Thus you chilled me a bit with the "Great Firewell" comment.

To describe the political consciousness of Chinese would require a (long) post in and of itself. There are big differences depending on class, education level, etc. I had some very interesting discussions with leading professors who had lived in the West and are now back in China.

The Great Firewall is aimed at the masses, not the intelligentsia. Think of the internal political economy of the government itself -- if your agency were responsible for the internet, you'd *have* to build in some controls just to avoid a beating from hard liners. In some ways the Great Firewall is analogous to the stupidity of us having to take off our shoes for airport security.

It certainly bugged me that all of Blogger and Blogspot are blocked by the firewall. I kind of expected that you might not be able to *read* blogspot blogs in China, but why not let me post from there? It wasn't easy to find circumvention tools for OS X -- much easier on Windows, which predominates in China. And as I mentioned, I just didn't have much time to fool around.

mmmm, so the question is over which vision prevails in the end - the hardliners or the intellectuals? or, in terms of the struggle, who benefits most from our engagement?

the need to take off shoes at the airport strikes me as a pandering of the Whitehouse to the ignorant masses ... I haven't a clue what the Chinese Joe Sixpack thinks of having the blogs blocked ...

certainly the early American struggles against their British overlords often included freedom of speech as a theme capable of inciting them to a bloodletting ...

If there is a strong chance global warming is true, how shrewd would it be to give the ideological cold shoulder to China? Is the US gov clearly so much better, anyway? We seem to have messed up the world economy (though China may have had a role). What about our very questionable democratic-idealist (AKA irrealist) wars in the middle east? We are good enough for me, a Western patriot, but we aint a city on a hill.

What about Russia? Wouldnt it be in trouble without a strong, free hand on top? From what little I know, I suspect it would be a mess as a democracy. Human biodiversity is true, and Russkies are just a rowdy lot. (Similarly, the North Korean regime might well not be stable if it ruled not asians but rather europeans, all of whom are relatively rowdy, political, and self-overestimating.) While Russian culture is incredibly passionate and beautiful, as a western weenie I definitely wont be moving there, I would never hold my own. China would not be chaotic as a democracy (especially not after 2020, when it will be a lot wealthier). But as long as they arent nuking me, which they aint gonna, I'm glad to let them be whatever they may be.

LondonYoung said...
This comment has been removed by the author.
1:55 PM

Just one little comment about China 2020. To quote Larry Summers, the correlation between projections of any given country's economic growth over the next ten year and its trailing ten year growth is almost 100%. Out of sample, the realized correlation is about 0%.

What does "out of sample" mean?

Anyway, China is sure to grow just fine if you ask me. I really doubt it will really slow down much for 15 years, or before it reaches US$25,000 per capita. It already has plenty 'nough capital that it cant be derailed too terribly by outside events -- that is events in the West. Just look at Japan, Singapore, South Korea, Taiwan -- GDP/cap vs time. Also, relatively speaking, that nation other than Singapore with all those ethnic chinese, is it Malaysia? Just google and see how fast they each went from 0 to 60. *Real* fast. Then look at North Korea and Mao's China; what will you behold in each. Savage government of course, incontrovertibly savage. Viola!, east Asia in one paragraph. As for SE Asia and India they dont have the economic potential of the NE. But they can still get a lot richer than they are now. Internationals, and capital, will be going there more as chinese labor gets pricier. It has been the world's most underpriced by far for 30 years -- all because Mr Mao won the civil war. Mao created this whole balance of trade problem, screwing over low-IQ Americans, not to mention a billion Chinese. The development of SE Asia and India slowed down too because of the Chinese labor superbargain.

Heres the one thing that could stop China from being rich: if its government decides it will be better off -- less decadent and such -- if it is only semi-rich.

Out of sample means that we take the predictions for the next ten years as made in year x, and then see how they did when the year x + 10 arrives. Collecting out-of-sample data is really slow, because of this delay.

Larry basically said that most people will predict the next 10 years' growth as a mirror of the trailing 10. But, historically, this approach doesn't work.

By the way, Eric, your final point is exactly my fear. Do you recognize this quote:

"But it was also clear that an all-round increase in wealth threatened the destruction -- indeed, in some sense was the destruction -- of a hierarchical society. In a world in which everyone worked short hours, had enough to eat, lived in a house with a bathroom and a refrigerator, and possessed a motor-car or even an aeroplane, the most obvious and perhaps the most important form of inequality would already have disappeared. If it once became general, wealth would confer no distinction. It was possible, no doubt, to imagine a society in which wealth, in the sense of personal possessions and luxuries, should be evenly distributed, while power remained in the hands of a small privileged caste. But in practice such a society could not long remain stable."

great so see so alibaba headoffice