Matter and Antimatter, Angels and Demons

[Slides, audio and video for the talk here.]

Next week I'm giving a public lecture on the science behind the latest Dan Brown blockbuster, Angels and Demons. Sony Pictures and the US LHC collaboration have coordinated similar talks across the country.

The illuminati have resurfaced, and are threatening to blow up the Vatican with an antimatter bomb stolen from CERN ;-)

What can I say? It's a good chance to talk to the general public about antimatter, particle physics and cosmology. I'll post my slides and video of the talk.

One point I'll make in the talk is that Dan Brown has accessed some powerful symbolism here -- contrasting the Catholic church and Vatican with modern particle physics and the massive detectors at the LHC. 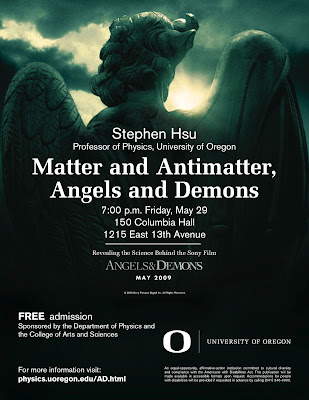 The Atlas detector at LHC (click for larger version). Director Ron Howard talking about the science vs religion aspect of the film.