A correspondent sent me this graphic from the Financial Times, which lets you see the 20 largest banks in the world by capitalization, and how the list changed over the last 10 years.

The first figure below shows the rankings in 1999 -- mostly US banks, with some Japanese, Swiss and UK firms as well. Guess who dominates the rankings today (second figure)?

Guess how much top executives at Citi were paid over the last decade to run the bank into the ground? Robert Rubin, where are you? See earlier post Clawbacks, fake alpha and tail risk. 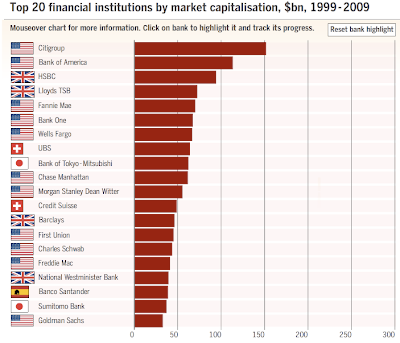 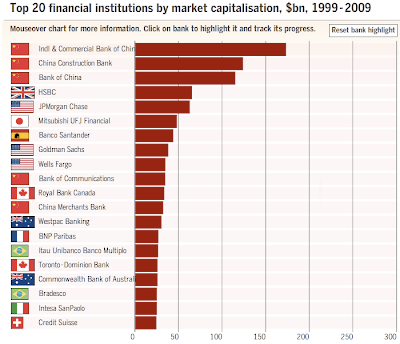 the bottom chart is definitely not up to date, JPM market cap is around $130 bn and Citi around $75/80 billion.

Citi stock price reflects the upcoming dilution due to preferred converts. Yahoo or Goog have not adjusted the number of shares to reflect the increase in the float.

And how much is HSBC a Chinese bank?

Yahoo or Goog have not adjusted the number of shares to reflect the increase in the float.Neither have Bloomberg, Reuters, and Dow Jones. Good grief.

As Jim Rogers said: "question everything"

Higher education is a dream that is definitely worth having. Do not allow financial limitations to keep you from your goal if possible but enter into all financial arrangements with great caution and thought.

Can we be sure that Chinese banks on the bottom chart have properly disclosed their losses due to the subprime debacle?

All American and European banks lost money, HSBC is down 30%, Lloyds is down so much (something like 80%) that it's off the chart. Is it possible that Chinese banks have totally avoided the problem?