I didn't get to see any of the coverage of the RNC since I'm here in Italy.

Regarding Palin, there is a natural instability in democracy towards anti-elitism. Many voters are attracted to a leader like themselves (a hockey / soccer mom with dysfunctional family and modest IQ), forgetting that they themselves would make a terrible president or vice-president. I do think the Republican base will like / likes Palin, and there is a chance she will appeal to lot of swing voters.

Is Romney the favorite for 2012? I've heard a lot of good things about him, but his RNC speech is pretty thoroughly middlebrow. Not that I disagree with every point, and certainly he had to tailor it to his audience, but I detect no signs of a large brain (unless you normalize to the MBA population).

I know few Americans care, but people in Europe think Palin is a joke. Another thing I've heard is that they don't believe Obama can overcome all the (perhaps hidden) racism to win the election. We will see! 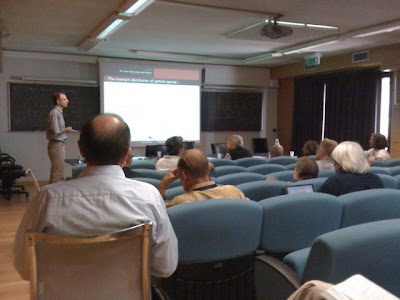 I'm not trying to be a booster for Palin, but I don't see why she is considered a joke while Biden gets a pass. His intelligence seems just as modest as Palin's.

Hmmm... don't know much about Biden. He does strike me as a blowhard sometimes on TV, but reasonably smart.

'a hockey / soccer mom with dysfunctional family and modest IQ'...uh, and what evidence do you have for a modest IQ? Actually, I think she seems very intelligent...at least as intelligent as the other candidates. Now if you wanted to call her a 'right-wing reactionary nut' I think you'd have a case.

My view is Biden is defintely smarter than Palin. You may not like him but he is the 5th youngest senator when he was elected into the congress at age 30. Palin was "Miss Congeniality" in Miss Alaska pageant. Both facts can be found in wikipedia. But IQ didn't really matter in last election (Kerry vs. Bush? a no brainer). Neither would it in this election. But I hope it is not true. Avg. people want to identify a candidate as one of their own without realizing themsevels would make terrible leaders, a good point brought up by Steve.

But IQ didn't really matter in last election (Kerry vs. Bush? a no brainer).

Despite popular perception to the contrary, Kerry's IQ is probably lower than GWB's. Bush's real problem is lack of interest/curiosity, not insufficient brainpower.

dog of justice, you made a big statement but left nothing to support your argument. "Kerry's IQ is probably lower than GWB's." you must be joking. One suggestion for you, look back on some speeches and compare how both speak and convey their ideas.

Actually Palin is a VPILF

Not that I disagree with every point, and certainly he had to tailor it to his audience, but I detect no signs of a large brain (unless you normalize to the MBA population).

Dude -- Romney scored a perfect 1600 on his SAT, attended Stanford for about 2 quarters before leaving for some religious reasons, and later got his joint JD/MBA from Harvard. Give the guy some credit.

You can't determine someone's intelligence by listening to one simple speech; there's just too much room for subjective preferences to trump everything else (Plus public speaking isn't a very cognitively demanding task. You would need to watch someone perform a complex, difficult tasks to really judge their intelligence.)

dog of justice, you made a big statement but left nothing to support your argument. "Kerry's IQ is probably lower than GWB's." you must be joking. One suggestion for you, look back on some speeches and compare how both speak and convey their ideas.

Bush got 1206 (which translates to a ~125 IQ) on his SAT and got higher grades than Kerry (whose military tests peg him at an IQ of 119) at Yale.... Once again, using one's public speeches is a very poor way to determine intelligence -- especially when these bloody things are written/scripted by other people.

Do Italians actually believe that USA citizens care what Italy thinks? Your government has been ridiculous for hundreds of years.

All debate on Bush's IQ aside, you probably would agree his IQ is A LOT higher than most of his supporters'. We shall not "misunderestimate" him.

Are you an elitist? I know most Europeans are elitists. The leaders of Europe are bought and paid for by special interests.

As for your comments regarding Palin's physical appearance, I can only question your human decency.

Biden is a joke. He adds noting to the ticket but hair plugs. Their is no evidence is smarter than Palin.

As for Barak, he stands before the world stage with less accomplished and less experience as a leader.

No matter which way you cut it Palin beats the Democratic ticket with little difficulty. Europe views America with a jealous eye.

Blogs certainly encourage off hand content but Steve, please, there should be some evidence for posts. Is there any that Palin's IQ is below/above Biden's? Obama's ? Republican primary voters (post WWII) do not seem to like professorial candidates (large vocabulary in speeches etc.) as well as Democratic primary voters do. This doesn't imply much about IQ, but manner.

On a related subject, is there evidence that high IQ makes for a good President? I would guess that the highest IQ post WWII Republican President was Nixon and Democrat was Carter (perhaps Clinton). No evidence there for better than average performance.

heres one small difference between palin and obama

palin was selected by a small group of powerful people within the party.

obama ran for his parties nomination by standing for some form of election, either by state wide balloting or by way of caucuses in nearly all 50 state primaries, receiving nearly 18 million votes from citizens

to do this he had to over-see a national campaign over a period of nearly a year.

even mccain didnt have to accomplish this as the "decision" by his party was made before half of the states had voted for or against him in primaries...his opponents were induced to withdraw.

up until 2 weeks ago few of us had ever heard about sarah palin, and to this day she has not granted a single interview.

we know a lot about biden. palin may well be president if mccain wins and his health fails given his age. i think she is a dynamic and interesting person. are you sure shes ready for the bug league?

second to last word should be big not bug,

as in big league

but bug league might after all be the better choice :)

It was really exciting for Alaskans everywhere to have their governor on the ticket to be the Vice President. I know I was excited. There was a lot of corruption with the oil companies and politicians in Alaska before she came into office. I don't know how I feel about her being Vice President. She has views I don't agree with on abortion and other issues, but calling her a religious nut with no foreign policy experience seems a little extreme. Enough with the hockey/soccer mom bullshit. She is a state governor, and a damn good one. Most of you are just repeating what you've heard on FOX or from random websites. All i can is she's running with McCain, get over it.

If you saw her interviews with Katie Couric and still believe Palin has an IQ of 115 you don't know much about estimating intelligence. She clearly lacks the intelligence and the communication skills to be president. We also need to take a close look at her ability to respect and uphold the USA constitution. McCain's impulsivity together with her Bible-brain could launch an all out holy war. Patriots don't chant "Drill baby drill," they sell their gas guzzling SUVs.