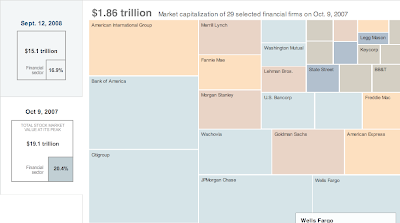 Here is a NYTimes graphic illustrating the decrease in market capitalization of financial firms. In 2007 they were 20% of the total stock market capitalization of $20 trillion dollars. By today they comprise about 17% of a $15 trillion market. (In other words, financials as a group are down about 15% relative to the market as a whole.) If you mouse over a particular company (on the Times flash version, not here) you can see how much its shares have lost over the last year.

This brings to mind a conversation I had a couple of years ago with hedge fund manager David Kane on whether "financial games" necessarily lead to more efficient allocation of economic assets in our society. I think everybody agrees now that we had (and still have -- 20% to go!) a massive housing bubble in which assets were overallocated to investment in homes. The use of leverage to make these investments is what has led to the destruction of so many major financial firms. Interestingly, many people predicted a few years ago that hedge funds would be a source of systemic risk, but so far in this crisis they haven't played a big role. Perhaps that is yet to come.

On the benevolence of financiers (December 2006)

David, if you are still reading this blog, I would love to hear your thoughts on current market events! [David's comments are here -- well worth reading.]

Deep thinker John McCain was very quick to throw Wall St. and the financiers under the bus in his remarks yesterday.
Posted by Steve Hsu at 11:48 AM

Just read your "benevolence of financiers" post and the comments. I cannot understand David's position at all - seems to me to be obvious that "financial games" will be detrimental to the overall health of the economy in certain circumstances. If you have a hedge fund with enough muscle it can take down a bank by creating a crisis in confidence when perhaps one is not merited e.g. Morgan Stanley is being heavily pressurized today despite announcing record results (now it may or may not be the case that the pressure is merited - the point is that with enough pressure on the stock people start panicking and withdrawing funding which can force capitulation).

I just cannot see how this type of issue will ever be resolved when you have such an asymmetrical reward system for people taking risks in financial institutions - if you are already a millionaire by being averagely good during the bull market and you can take enormous bets that will either pay off and make you a billionaire (john paulson) or fail and your fund blows up but you stay a millionaire, what would you do? I think we have to introduce regulation so that there is meaningful personal liability, in the same way that doctors can be sued for being negligent, civil engineers can be sued for building buildings that collapse etc...