What Created This Monster? 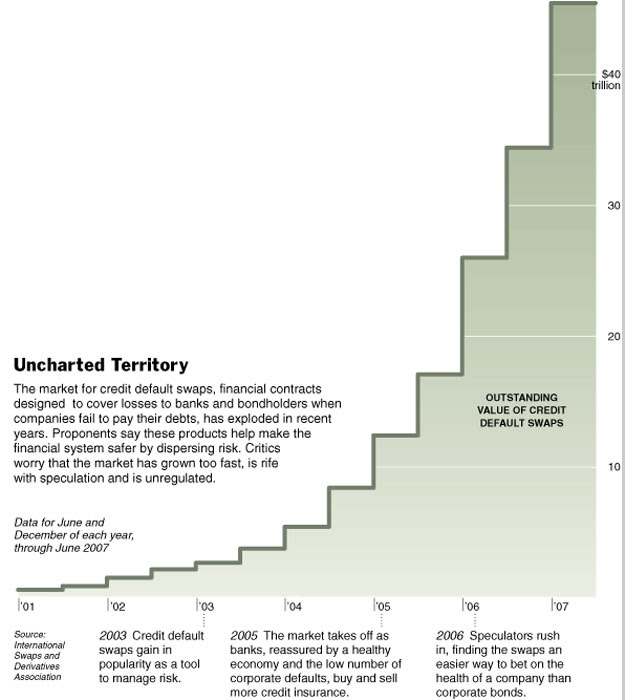 The mainstream media is finally starting to catch on to the nature of the current credit crisis. One of the key points is that very few of the top people -- CEOs, central bankers, regulators -- really understood what was going on. Some are even starting to admit it.

See this article in the Sunday Times, and dozens of posts on this blog over the last 3 years... Here's a post from 2004 in which I noted that Fannie Mae CEO Franklin Raines didn't seem to understand derivatives accounting.

NYTimes: ...LIKE Noah building his ark as thunderheads gathered, Bill Gross has spent the last two years anticipating the flood that swamped Bear Stearns about 10 days ago. As manager of the world’s biggest bond fund and custodian of nearly a trillion dollars in assets, Mr. Gross amassed a cash hoard of $50 billion in case trading partners suddenly demanded payment from his firm, Pimco.

And every day for the last three weeks he has convened meetings in a war room in Pimco’s headquarters in Newport Beach, Calif., “to make sure the ark doesn’t have any leaks,” Mr. Gross said. “We come in every day at 3:30 a.m. and leave at 6 p.m. I’m not used to setting my alarm for 2:45 a.m., but these are extraordinary times.”

Even though Mr. Gross, 63, is a market veteran who has lived through the collapse of other banks and brokerage firms, the 1987 stock market crash, and the near meltdown of the Long-Term Capital Management hedge fund a decade ago, he says the current crisis feels different — in both size and significance.

The Federal Reserve not only taken has action unprecedented since the Great Depression — by lending money directly to major investment banks — but also has put taxpayers on the hook for billions of dollars in questionable trades these same bankers made when the good times were rolling.

“Bear Stearns has made it obvious that things have gone too far,” says Mr. Gross, who plans to use some of his cash to bargain-shop. “The investment community has morphed into something beyond banks and something beyond regulation. We call it the shadow banking system.”

It is the private trading of complex instruments that lurk in the financial shadows that worries regulators and Wall Street and that have created stresses in the broader economy. Economic downturns and panics have occurred before, of course. Few, however, have posed such a serious threat to the entire financial system that regulators have responded as if they were confronting a potential epidemic.

As Congress and Republican and Democratic presidential administrations pushed for financial deregulation over the last decade, the biggest banks and brokerage firms created a dizzying array of innovative products that experts now acknowledge are hard to understand and even harder to value.

On Wall Street, of course, what you don’t see can hurt you. In the past decade, there has been an explosion in complex derivative instruments, such as collateralized debt obligations and credit default swaps, which were intended primarily to transfer risk.

These products are virtually hidden from investors, analysts and regulators, even though they have emerged as one of Wall Street’s most outsized profit engines. They don’t trade openly on public exchanges, and financial services firms disclose few details about them.

...TWO months before he resigned as chief executive of Citigroup last year amid nearly $20 billion in write-downs, Charles O. Prince III sat down in Washington with Representative Barney Frank, the chairman of the House Financial Services Committee. Among the topics they discussed were investment vehicles that allowed Citigroup and other banks to keep billions of dollars in potential liabilities off of their balance sheets — and away from the scrutiny of investors and analysts.

“Why aren’t they on your balance sheet?” asked Mr. Frank, Democrat of Massachusetts. The congressman recalled that Mr. Prince said doing so would have put Citigroup at a disadvantage with Wall Street investment banks that were more loosely regulated and were allowed to take far greater risks. (A spokeswoman for Mr. Prince confirmed the conversation.)

It was at that moment, Mr. Frank says, that he first realized just how much freedom Wall Street firms had, and how lightly regulated they were in comparison with commercial banks, which have to answer to an alphabet soup of government agencies like the Federal Reserve and the comptroller of the currency.

...Wall Street firms rushed into the new frontier of lucrative financial products like derivatives. Students with doctorates in physics and other mathematical disciplines were hired directly out of graduate school to design them, and Wall Street firms increasingly made big bets on derivatives linked to mortgages and other products.

...ONE of the fastest-growing and most lucrative businesses on Wall Street in the past decade has been in derivatives — a sector that boomed after the near collapse of Long-Term Capital.

It is a stealth market that relies on trades conducted by phone between Wall Street dealer desks, away from open securities exchanges. How much changes hands or who holds what is ultimately unknown to analysts, investors and regulators.

Credit rating agencies, which banks paid to grade some of the new products, slapped high ratings on many of them, despite having only a loose familiarity with the quality of the assets behind these instruments.

Even the people running Wall Street firms didn’t really understand what they were buying and selling, says Byron Wien, a 40-year veteran of the stock market who is now the chief investment strategist of Pequot Capital, a hedge fund.

“These are ordinary folks who know a spreadsheet, but they are not steeped in the sophistication of these kind of models,” Mr. Wien says. “You put a lot of equations in front of them with little Greek letters on their sides, and they won’t know what they’re looking at.”

Mr. Blinder, the former Fed vice chairman, holds a doctorate in economics from M.I.T. but says he has only a “modest understanding” of complex derivatives. “I know the basic understanding of how they work,” he said, “but if you presented me with one and asked me to put a market value on it, I’d be guessing.”

...Timothy F. Geithner, a career civil servant who took over as president of the New York Fed in 2003, was trying to solve a variety of global crises while at the Treasury Department. As a Fed president, he tried to get a handle on hedge fund activities and the use of leverage on Wall Street, and he zeroed in on the credit derivatives market.

Mr. Geithner brought together leaders of Wall Street firms in a series of meetings in 2005 and 2006 to discuss credit derivatives, and he pushed many of them to clear and settle derivatives trading electronically, hoping to eliminate a large paper backlog that had clogged the system.

Even so, Mr. Geithner had one hand tied behind his back. While the Fed regulated large commercial banks like Citigroup and JPMorgan, it had no oversight on activities of the investment banks, hedge funds and other participants in the burgeoning derivatives market. And the industry and sympathetic politicians in Washington fought attempts to regulate the products, arguing that it would force the lucrative business overseas.

“Tim has been learning on the job, and he has my sympathy,” said Christopher Whalen, a managing partner of Institutional Risk Analytics, a risk management firm in Torrance, Calif. “But I don’t think he’s enough of a real practitioner to go mano-a-mano with these bankers.”

...In the meantime, analysts say, a broader reconsideration of derivatives and the shadow banking system is also in order. “Not all innovation is good,” says Mr. Whalen of Institutional Risk Analytics. “If it is too complicated for most of us to understand in 10 to 15 minutes, then we probably shouldn’t be doing it.”

As an economics student, it's rather disoncerting to see how little the top guys seem to know. Some economists have been paying attention, but it seems to me they are basically using the old framework of ideas that came from the Great Depression. Bernanke, of course, is a big student of the Depression, but you'd hope that someone in charge of looking after a complex system should have some idea of how it works at the low levels.

On the other hand, who's got a better picture? Do quants and traders study things like systemic risk, contagion, moral hazard, and the "real" economy?

Yes, they do. Pimco, for example, was one of the few shops that had a realistic understanding of the housing bubble and subprime.

You can go back and read what Bill Gross and team were writing over the last few years. The hard part about understanding this crisis was the timing -- pull the trigger too early and you get killed. Paulson (the guy who made $4B betting against subprime) had great luck/timing, whereas others who made the same trade just a year or two earlier got crushed.

The trouble with academic economists is that they are *never* marked to market!