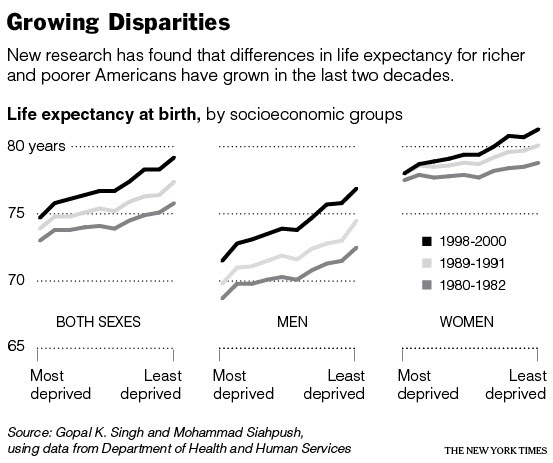 Or, at least, get a good education so that you can follow progress in health research, and develop enough self-discipline that you can implement the important recommendations. The entire effect may simply be that those capabilities tend to be correlated with income and social status.

He and another researcher, Mohammad Siahpush, a professor at the University of Nebraska Medical Center in Omaha, developed an index to measure social and economic conditions in every county, using census data on education, income, poverty, housing and other factors. Counties were then classified into 10 groups of equal population size.

“If you look at the extremes in 2000,” Dr. Singh said, “men in the most deprived counties had 10 years’ shorter life expectancy than women in the most affluent counties (71.5 years versus 81.3 years).” The difference between poor black men and affluent white women was more than 14 years (66.9 years vs. 81.1 years).

...Robert E. Moffit, director of the Center for Health Policy Studies at the conservative Heritage Foundation, said one reason for the growing disparities might be “a very significant gap in health literacy” — what people know about diet, exercise and healthy lifestyles. Middle-class and upper-income people have greater access to the huge amounts of health information on the Internet, Mr. Moffit said.

“People with more education tend to have a longer time horizon,” Mr. Miller said. “They are more likely to look at the long-term consequences of their health behavior. They are more assertive in seeking out treatments and more likely to adhere to treatment advice from physicians.”

A recent study by Ellen R. Meara, a health economist at Harvard Medical School, found that in the 1980s and 1990s, “virtually all gains in life expectancy occurred among highly educated groups.”

The curves for men appear to have pretty much a vertical shift, while the women’s curve exhibits an increasing slope with time. Note the way the three curves come together at the low end. Since the dependent variable is life expectancy at birth, I suspect we are seeing an infant mortality effect here. Since 1980 the immigrant population of the US has swelled considerably, and it could be that the increase in the population of Hispanic women are primary driver of the slope change. They have a much higher birth rate and different behavior. That’s the problem with these highly aggregated statistics. If the implication here is that we can just give poor people more money they will live much longer, I think the advocates of this policy are setting themselves up for a disappointement.

This might counteract any "marching morons" effect among retired people. Voting patterns may not shift as far toward nationalized health care as many expect.