The one sided clash of civilizations 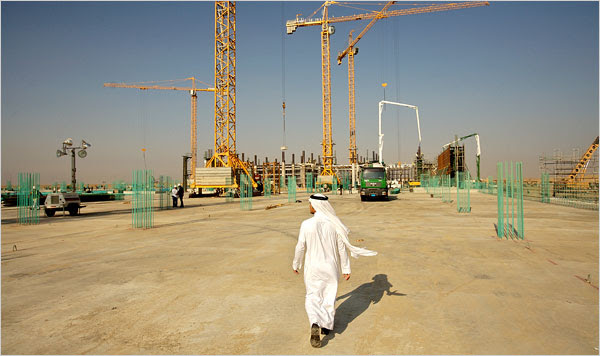 This NYTimes article describes the creation of the King Abdullah University of Science and Technology (KAUST), a $12.5B endowment from King Abdullah of Saudi Arabia. The prospects for creating a world class university there seem dim, even with significant financial resources -- would you leave your position in, e.g., Boston, for one at KAUST? Similar undertakings, such as KAIST in Korea, can depend on a deep pool of expatriate (Korean emigrants abroad) and local talent.

The article reveals that this particular clash of civilizations is very one-sided.


NYTimes: ...For the new institution, the king has cut his own education ministry out the loop, hiring the state-owned oil giant Saudi Aramco to build the campus, create its curriculum and attract foreigners.

Supporters of what is to be called the King Abdullah University of Science and Technology, or Kaust, wonder whether the king is simply building another gated island to be dominated by foreigners, like the compounds for oil industry workers that have existed here for decades, or creating an institution that will have a real impact on Saudi society and the rest of the Arab world.

“There are two Saudi Arabias,” said Jamal Khashoggi, the editor of Al Watan, a newspaper. “The question is which Saudi Arabia will take over.”

The king has broken taboos, declaring that the Arabs have fallen critically behind much of the modern world in intellectual achievement and that his country depends too much on oil and not enough on creating wealth through innovation.

“There is a deep knowledge gap separating the Arab and Islamic nations from the process and progress of contemporary global civilization,” said Abdallah S. Jumah, the chief executive of Saudi Aramco. “We are no longer keeping pace with the advances of our era.”

Peeve: it's "expatriate", not "expatriot." They're not former patriots.

If he's really serious about ameliorating the "deep knowledge gap separating the Arab and Islamic nations from the process and progress of contemporary global civilization" he probably should take a look at the "schools" in Saudi Arabia that teaches nothing but the Koran. Window dressing, I say.

Counterfly: thanks! it is fixed.

Buddy there is a lot of talent.. Obama doesn't want quality people to come and enrich his country (the same people who are responsible for making US what it is now).. Well let me give you a real life example.. Me.. I'm a Master's in Chemistry from IIT Delhi India (know IIT - the institute from India whose computer engineerss made Silicon Valley..) and I'm applying to KAUST for the doctoral program.. You didn't even think about India and the Indian brain.. You don't need to run rodshows to convince them.. they're like ants.. you don't need to tell where the sack of Sugar is.. so maybe I'll be one of the first few scouting ants and once it gets going there's going to be no dearth of talent.. India's basic science and tech bacground is very strong and the best out of here if given proper opportunities and facilities can produce quality innovations to match the best in the world.. Is someone from Kaust litening??

oops.. you are a big guy.. just went through your profile.. hope you didn't get offended by the tone of my last post.. but isn't Science supposed to bring in more egalitarianism??
Anyways, it's good to have known you.. good to get know thinking individuals..
Cheers!
Gaurav

good luck at kaust. put up a comment sometime, or send an email, telling us how it is. no question there are a lot of good iit people...