Fraud and the subprime mess

Via Calculated Risk, this Moody's data suggests that outright fraud is one of the main causes of high default rates on recent subprime mortgages. 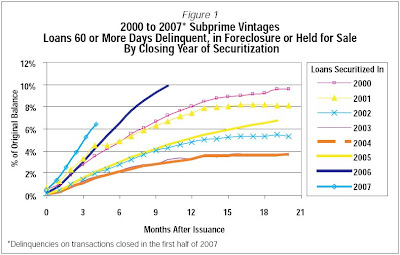 The data show that, as we have noted in previous communications, loan performance for the 2006 subprime vintage seems to be driven primarily by the proportions of stated documentation loans and high CLTV loans backing the transactions as well as the proportion of loans that combine (or "layer") these risk characteristics. (Stated documentation loans are those loans for which the borrower's income and assets are not verified by documentation during the loan approval process and therefore are more likely to be overstated.) Interestingly, FICO scores and LTV ratios do not vary significantly between the strongest and weakest performing transactions and on average transaction performance does not appear to have been influenced by these characteristics.