Brain drain: from the Punjab to the bayou

Congratulations to Bobby (Piyush) Jindal, govenor-elect of Louisiana. Does this photo remind you of Bobby Kennedy? 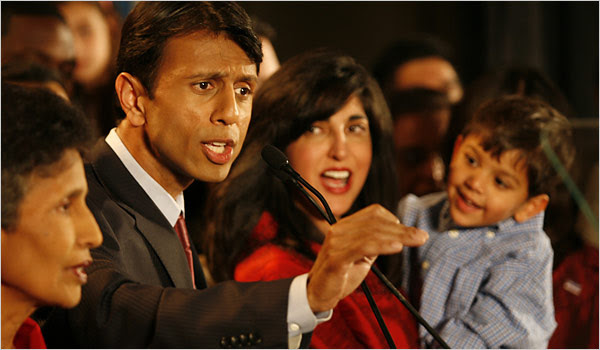 NYTimes: A Son of Immigrants Rises in a Southern State

Piyush Jindal was born on June 10, 1971, in Baton Rouge to Hindu parents who had come to the United States six months before so his mother could pursue a graduate degree in nuclear physics at Louisiana State University. His father was an engineer from the Punjab region of India, the only one of nine siblings to attend high school. The younger Jindal, growing up in Baton Rouge, was not expected to come home from school with anything less than 100 on tests. Public high school in Baton Rouge was followed by Brown, where Mr. Jindal was Phi Beta Kappa, and a conversion to Roman Catholicism that Mr. Jindal has described in transformative terms. “I draw my definition of integrity from my Christian faith,” Mr. Jindal said during the campaign. “In my faith, you give 100 percent of yourself to God.”

“But we live in a pluralistic state,” he was careful to add.

After Oxford, a well-paid stint at the Washington consultants McKinsey and Company was followed by an interview for the job of secretary of the state Department of Health and Hospitals with the newly elected Republican governor of Louisiana, Mike Foster, in 1995. Mr. Jindal was 24; it was the biggest department in state government, and it was in serious financial trouble. He got the job despite Mr. Foster’s initial skepticism, made cuts and restored the department to financial stability; Louisiana still has one of the highest percentages of uninsured, however.

Electing this guy was a bad move. His priorities are aligned with the catholic church, which hasn't exactly supported science lately.