The Fed model for equity valuation compares the E/P of stocks to the 10yr yield on Treasurys. The usual justification is that stocks and bonds are competing asset classes, and one should compare their future cash flows to obtain a relative valuation. When yields on bonds are low, investors will tolerate a lower E/P (or higher P/E) in equities. One subtlety here is future inflation, which seems to "pass through" to corporate earnings, but erodes the real returns on bonds. While E/P might be a plausible forecast of future real corporate cashflows, the 10yr yield is only in nominal dollars. Perhaps it would be better to substitute the 10yr yield on TIPS for the bond component.

I found some interesting analysis of the Fed model (and the following figures) in this paper by C. Asness. Figure 2 shows that the Fed model has been quite successful over the last 30 years, but not for earlier periods. I had always thought this discrepancy was explained by inflation - the Fed model was successful in the recent period when inflation was perceived to be under control (i.e., post Volcker). Asness has a different take. He fits E/P = a + bY + c v_s / v_b where Y is the bond yield, v_s the trailing 20y stock volatility and v_b the trailing 20y bond volatility, reasoning that the relative perceived vols will affect the attractiveness of stocks vs bonds. The result, shown in Figure 4, is quite nice. The best fit value of b is close to 1 (similar to the Fed model), and since the trailing 20y vol is by definition slowly varying, it seems the Fed model is not a bad rule of thumb for current valuation. 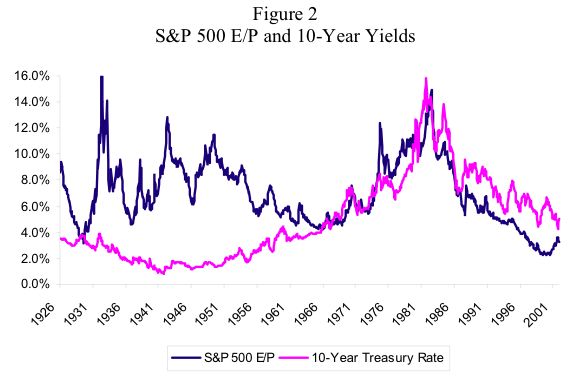 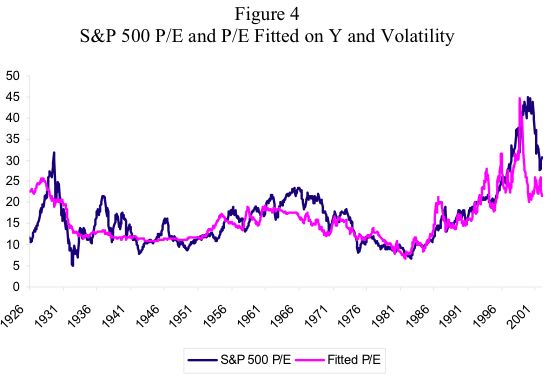 I thought the reason for the bad fit earlier is that in the old days, people didn't understand how to value stocks. They expected to be compensated nicely in dividends, and didn't take into account capital appreciation.

(This isn't my analysis; just a claim I read.)

To be honest, I can't claim to have any understanding of the early 20th century data. Were reliable P/E numbers available? Is there any evidence that very many people ever tried to "crunch the numbers" the way we do routinely today? (Other than Graham and Dodd followers, who were probably a small minority.)

I think the general attitude of investors evolves collectively over time, from regarding stocks as very risky (most of 20th century, hence low P/E), to the buy and hold or "stocks for the long run" wisdom, which allowed a high P/E (mid-80's until the tech bubble burst). Post-2001, we've moved to a "real estate is the safe investment" mentality.

This is quite interesting. Price earning ratios have stayed high through the bear market and are high from an historical perspective at present. I am not sure how to interpret this. How much were earning artificially inflated by 2000? Are investors from this point on to be content with buying stocks at a p/e ratio of 18 to 20 or higher? What would S&P valuation look like with the expensing of options? What choice is there other than stocks, since bonds and real estate are surely expensive? So, buy and hold your indexes here and abroad and hope we do not revert to the historical mean. What a fine job you have done.

Sorry, I am not used to this sort of comment. That was Anne, and thank you for the interesting Blog.

I will read your Blog thoroughly from now. I am, by the way, most optimistic about China being able to sustain growth of 7 to 12% for quite a while if she can engineer or stimulate a more and more robust middle class consumer driven domestic market. The export model of development has limits that may all too soon be reached for a country the size of China.

SHENZHEN, China - The scene on the street did not look like much, just the comings and goings of small groups of women from their factory dormitory, with a few lingering here and there in knots to discuss their situation.

Since Friday, though, work has stopped inside the Uniden factory's walls here, where 12,000 workers, mostly young women from China's poor interior provinces, make wireless phones, which the Japanese manufacturer supplies in large number to the giant American retailer Wal-Mart.

China's laws tightly proscribe public demonstrations, so the women found another way to vent their anger over their wages, and what they said were many other abusive work conditions. They met secretly to draw up a list of demands, and then walked off the job.

Wal-Mart has been much in the news recently in China, with the government insisting that the retailer do what it refuses to do in the United States: allow all its workers to join unions.

But what the scene at the Uniden plant here in Shenzhen, the very heartland of China's export-led resurgence, reveals is a situation much more typical in this country's booming new economy, where the government has been reluctant to enforce laws that would oblige foreign companies to allow unions, for fear of losing overseas investment.

The hordes of young women employed here say they are required to work 11-hour days, including three hours of mandatory overtime, to earn a basic monthly salary of 484 yuan, or about $58.

The women say they must spend nearly half their wage on the drab company dormitories where, as migrants, they must live. They laughed ruefully when asked if they were able to save any money, or send money back to their families.

"No, I haven't been able to save any money," said Liu Shuangyan, outside the factory gates. "You have to eat. You buy a few clothes, and then there's nothing left."

"If you get sick," added Ms. Liu, a native of Hunan Province, "they won't give you leave unless it is very serious."

A friend and fellow worker from Hunan, Wang Lifang, then spoke up to say, "They have a small clinic, but you have to pay, and the medicines they give you are much more expensive than outside."

Other young women said that many minors were employed in the plant, and that most of the employees had been forced to pay 200 yuan under the table as a job-finder's fee in order to be hired.

Some women said they had little idea what a union was, but yearned for some kind of representation that could serve as their advocate. Others said with certainty that no union existed, and ascribed their plight in large part to this fact.

"If there were a union, things would be fairer for us," said one 32-year-old woman from Henan Province. "Right now, one person says one thing, another complains about another, and the boss doesn't listen to anything."

Workers said the strike began when a senior Japanese manager was overheard saying to a Chinese supervisor that the employees would be foolish to accept the terms of a new contract being offered them. Others said it was caused by abusive dismissals of workers with seniority to make way for cheaper, more pliable replacements.

Japanese officials at the company, reached by telephone, refused to comment, passing the phone to a Chinese manager. The manager, who declined to identify himself, said, "A group of workers' contracts have reached termination, and the company, in conformance with labor laws, did not offer them a new contract."

Believing the questions were coming from a caller in New York, the Chinese manager said the strike had ended, early in the afternoon, and the situation had returned to normal.

"If you could get into a spaceship right now and come over, you'd see for yourself," he said, laughing.

Meanwhile, plainclothes security agents milled outside of the plant. As soon as a foreigner began taking photographs of the continuing work stoppage, they called the police.

Analysts of China's labor scene say strikes like this are becoming far more common as younger migrant workers exposed to the wealth of China's relatively rich eastern cities grow increasingly angry over what many see as their exploitation. Although few are unionized, communication and coordination among them is growing, often through the sending of coded messages to each other by cellphone.

"The migrant workers have learned to protest with their feet, they are more capable of negotiating, and they can choose not to work," said Liu Kaiming, who studies conditions of migrant workers in Guangdong Province. "That has especially been true recently, with a lot of the migrant workers who were born in the 1980's entering the workforce. They've had a better education, they're young and emotional, and they've been emboldened by media reports about their conditions to demand their rights."

All the women interviewed seemed determined to press their demands, the most important of which, they said, were shorter work hours and enforcement of minimum-wage laws.

Asked if they were afraid of losing their jobs, they scoffed at the idea, saying workers were in short supply in Shenzhen's vast manufacturing zone.

"If we were men, there would have been a strike a long time ago," one woman said. "Women are easier to bully, but we have hearts of steel."

I would say that all US assets (stocks, bonds, real estate) right now are expensive. The record low yields on Treasurys sets the "risk free" rate (well, OK, technically TIPS are the risk free rate), and everything is measured relative to that. The prices of all other assets have been bid up in a search for yield, so consequently E/P (stocks) or rent/price (real estate; even if we take price = mortgage payment stream) are all at record lows.

Foreign assets don't seem so overpriced, though. But I have been burned before betting against the resiliency of the US economy!

So, we have to invent valuation criteria anew, as Jeremy Siegal argues, and assume a 20 to 22 norm for the p/e ratio. There goes the nice risk premium. European stocks are better valued, but earnings growth is likely to lag. Pacific stocks are 75% Japanese, and Japan has been the riskiest of developed country stock markets since the beginning of 1990. Emerging markets? Lots of risk. Yes, assets are expensive :)

I will remember to sign, Grumble Grumble. When I think of Anonymous, I think of "Ikiru" by Kurosawa.

Also, Perez Galdos "Maus" is a masterpiece of a novel about a father and office worker who, gentle soul though he is, is reduced to a squeak.