This is a new paper which uses Genomic Prediction IVF family data, including genotyped embryo samples.

We use UK Biobank and a unique IVF family dataset (including genotyped embryos) to investigate sibling variation in both phenotype and genotype. We compare phenotype (disease status, height, blood biomarkers) and genotype (polygenic scores, polygenic health index) distributions among siblings to those in the general population. As expected, the between-siblings standard deviation in polygenic scores is \sqrt{2} times smaller than in the general population, but variation is still significant. As previously demonstrated, this allows for substantial benefit from polygenic screening in IVF. Differences in sibling genotypes result from distinct recombination patterns in sexual reproduction. We develop a novel sibling-pair method for detection of recombination breaks via statistical discontinuities. The new method is used to construct a dataset of 1.44 million recombination events which may be useful in further study of meiosis.

Here are some figures illustrating the variation of polygenic scores among siblings from the same family. 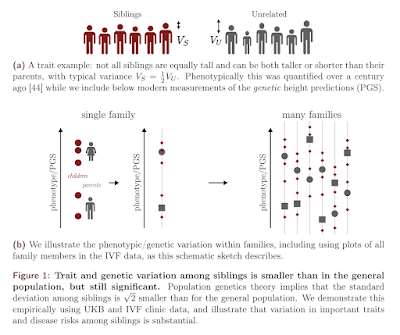 The excerpt below describes the IVF family highlighted in blue above:

Among the families displayed in these figures, at position number 15 from the left, we encounter an interesting case of sibling polygenic distribution relative to the parents. In the family all siblings have significantly higher Health Index score than the parents. This arises in an interesting manner: the mother is a high-risk outlier for condition X and the father is a high-risk outlier for condition Y. (We do not specify X and Y, out of an abundance of caution for privacy, although the patients have consented that such information could be shared.) Their lower overall Health Index scores result from high risk of conditions X (mother) and Y (father). However, the embryos, each resulting from unique recombination of parental genotypes, are normal risk for both X and Y and each embryo has much higher Health Index score than the parents. 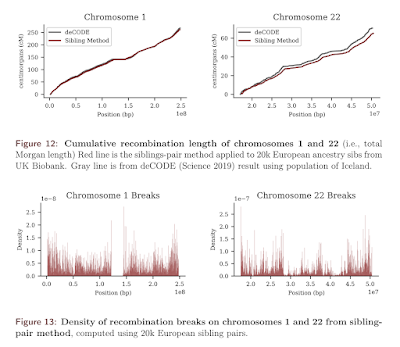 The second part of the paper introduces a new technique that directly probes DNA recombination -- the molecular mechanism responsible for sibling genetic differences. See figure above for some results. The new method detects recombination breaks via statistical discontinuities in pairwise comparisons of DNA regions.
From the discussion:

...This new sibling-pair method can be applied to large datasets with many thousands of sibling pairs. In this project we created a map of roughly 1.44 million recombination events using UKB genomes. Similar maps can now be created using other biobank data, including in non-European ancestry groups that have not yet received sufficient attention. The landmark deCODE results were obtained under special circumstances: the researchers had access to data resulting from a nationwide project utilizing genealogical records (unusually prevalent in Iceland) and widespread sequencing. Using the sibling-pair method results of comparable accuracy can be obtained from existing datasets around the world -- e.g., national biobanks in countries such as the USA, Estonia, China, Taiwan, Japan, etc.

The creator of this new sibling-pair method for recombination mapping is my son. He developed and tested the algorithm, and wrote all the code in Python. It's his high school science project :-)