This is the published version of our recent paper. See previous discussion of the arXiv preprint: Finitism and Physics.

We show that the precision of an angular measurement or rotation (e.g., on the orientation of a qubit or spin state) is limited by fundamental constraints arising from quantum mechanics and general relativity (gravitational collapse). The limiting precision is 1/r in Planck units, where r is the physical extent of the (possibly macroscopic) device used to manipulate the spin state. This fundamental limitation means that spin states cannot be experimentally distinguished from each other if they differ by a sufficiently small rotation. Experiments cannot exclude the possibility that the space of quantum state vectors (i.e., Hilbert space) is fundamentally discrete, rather than continuous. We discuss the implications for finitism: does physics require infinity or a continuum?

In the revision we edited the second paragraph below to clarify the history regarding Hilbert's program, Gödel, and the status of the continuum in analysis. The continuum was quite controversial at the time and was one of the primary motivations for Hilbert's axiomatization. There is a kind of modern middle-brow view that epsilon and delta proofs are sufficient to resolve the question of rigor in analysis, but this ignores far more fundamental problems that forced Hilbert, von Neumann, Weyl, etc. to resort to logic and set theory.

In the early 20th century little was known about neuroscience (i.e., our finite brains made of atoms), and it had not been appreciated that the laws of physics themselves might contain internal constraints that prevent any experimental test of infinitely continuous structures. Hence we can understand Weyl's appeal to human intuition as a basis for the mathematical continuum (Platonism informed by Nature; Gödel was also a kind of Platonist), even if today it appears implausible. Now we suspect that our minds are simply finite machines and nothing more, and that Nature itself does not require a continuum -- i.e., it can be simulated perfectly well with finitary processes.

It may come as a surprise to physicists that infinity and the continuum are even today the subject of debate in mathematics and the philosophy of mathematics. Some mathematicians, called finitists, accept only finite mathematical objects and procedures [30]. The fact that physics does not require infinity or a continuum is an important empirical input to the debate over finitism. For example, a finitist might assert (contra the Platonist perspective adopted by many mathematicians) that human brains built from finite arrangements of atoms, and operating under natural laws (physics) that are finitistic, are unlikely to have trustworthy intuitions concerning abstract concepts such as the continuum. These facts about the brain and about physical laws stand in contrast to intuitive assumptions adopted by many mathematicians. For example, Weyl (Das Kontinuum [26], [27]) argues that our intuitions concerning the continuum originate in the mind's perception of the continuity of space-time.

There was a concerted effort beginning in the 20th century to place infinity and the continuum on a rigorous foundation using logic and set theory. As demonstrated by Gödel, Hilbert's program of axiomatization using finitary methods (originally motivated, in part, by the continuum in analysis) could not succeed. Opinions are divided on modern approaches which are non-finitary. For example, the standard axioms of Zermelo-Fraenkel (ZFC) set theory applied to infinite sets lead to many counterintuitive results such as the Banach-Tarski Paradox: given any two solid objects, the cut pieces of either one can be reassembled into the other [28]. When examined closely all of the axioms of ZFC (e.g., Axiom of Choice) are intuitively obvious if applied to finite sets, with the exception of the Axiom of Infinity, which admits infinite sets. (Infinite sets are inexhaustible, so application of the Axiom of Choice leads to pathological results.) The Continuum Hypothesis, which proposes that there is no cardinality strictly between that of the integers and reals, has been shown to be independent (neither provable nor disprovable) in ZFC [29]. Finitists assert that this illustrates how little control rigorous mathematics has on even the most fundamental properties of the continuum. 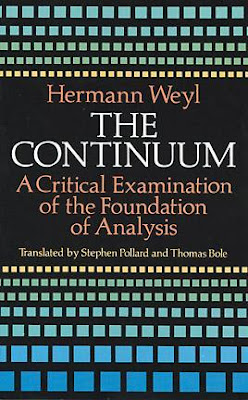 Weyl was never satisfied that the continuum and classical analysis had been placed on a solid foundation.

Another mathematical “possible” to which Weyl gave a great deal of thought is the continuum. During the period 1918–1921 he wrestled with the problem of providing the mathematical continuum—the real number line—with a logically sound formulation. Weyl had become increasingly critical of the principles underlying the set-theoretic construction of the mathematical continuum. He had come to believe that the whole set-theoretical approach involved vicious circles[11] to such an extent that, as he says, “every cell (so to speak) of this mighty organism is permeated by contradiction.” In Das Kontinuum he tries to overcome this by providing analysis with a predicative formulation—not, as Russell and Whitehead had attempted, by introducing a hierarchy of logically ramified types, which Weyl seems to have regarded as excessively complicated—but rather by confining the comprehension principle to formulas whose bound variables range over just the initial given entities (numbers). Accordingly he restricts analysis to what can be done in terms of natural numbers with the aid of three basic logical operations, together with the operation of substitution and the process of “iteration”, i.e., primitive recursion. Weyl recognized that the effect of this restriction would be to render unprovable many of the central results of classical analysis—e.g., Dirichlet’s principle that any bounded set of real numbers has a least upper bound[12]—but he was prepared to accept this as part of the price that must be paid for the security of mathematics.

As Weyl saw it, there is an unbridgeable gap between intuitively given continua (e.g. those of space, time and motion) on the one hand, and the “discrete” exact concepts of mathematics (e.g. that of natural number[13]) on the other. The presence of this chasm meant that the construction of the mathematical continuum could not simply be “read off” from intuition. It followed, in Weyl’s view, that the mathematical continuum must be treated as if it were an element of the transcendent realm, and so, in the end, justified in the same way as a physical theory. It was not enough that the mathematical theory be consistent; it must also be reasonable.

Das Kontinuum embodies Weyl’s attempt at formulating a theory of the continuum which satisfies the first, and, as far as possible, the second, of these requirements. In the following passages from this work he acknowledges the difficulty of the task:

… the conceptual world of mathematics is so foreign to what the intuitive continuum presents to us that the demand for coincidence between the two must be dismissed as absurd. (Weyl 1987, 108)

… the continuity given to us immediately by intuition (in the flow of time and of motion) has yet to be grasped mathematically as a totality of discrete “stages” in accordance with that part of its content which can be conceptualized in an exact way.

See also The History of the Planck Length and the Madness of Crowds.
Posted by Steve Hsu at 7:42 AM