Tears before the Rain: An Oral History of the Fall of South Vietnam (Afghanistan darkness over Kabul edition) 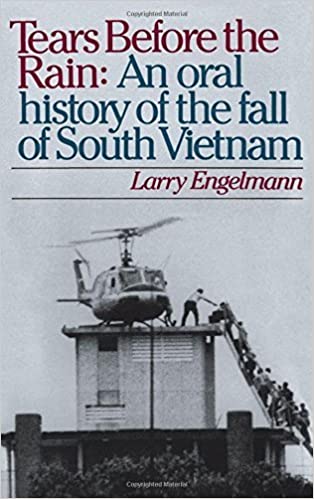 If you are following events in Afghanistan you know that the tragedy described below will soon be repeated.

The oral histories collected in this volume are heartbreaking and real, but today the events they describe are all but forgotten.

There was never any reckoning for the crimes and stupidity of the Vietnam war, and there won't be any in the wake of our 20 years in Afghanistan and Iraq.

Our pathetic leaders and apathetic voters will find plenty of other things to distract them from a serious consideration of what happened. Strike up the band, and salute the flag. 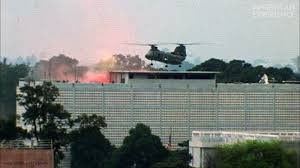 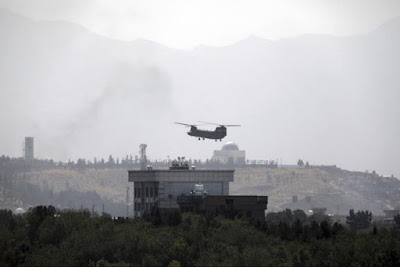 On March 10, 1975, the North Vietnamese Army launched what was to be its final major offensive against South Vietnam, assured that America had lost its will to fight or to finance the independence of South Vietnam. No longer fearful of American intervention, the North Vietnamese were certain that victory and the forceful unification of Vietnam was, after nearly thirty years of conflict, soon to be accomplished. Now the social and military fabric of South Vietnam began to unravel rapidly in many places at the same time. The South suddenly began to lose the war faster than the North could win it. The military forces of the South seemed to be imploding toward Saigon. Cities and provinces were abandoned to the North without a fight. ...Victory for the armies of North Vietnam became, in many strategically important places, a mere matter of marching.

On March 29, the chaotic and desperate situation was recorded graphically by a CBS news crew that flew aboard a World Airways Boeing 727 to Danang, Vietnam's second largest city, to evacuate refugees. The plane was mobbed by soldiers who shot women and children and each other in a frenzied attempt to scramble aboard the aircraft and escape from the advancing North Vietnamese. As the plane took off with people clinging to the wheels, soldiers on the ground fired at it and a hand grenade blew up under one wing. The plane limped back into Saigon, and that evening a tape of the flight was shown on the CBS Evening News. American television viewers that Easter weekend saw the almost unbelievable horror of an army transformed into murderous rabble and a country thrashing about helplessly in the throes of a violent death.

... As if to leave no doubt as to America's determination not to intervene again in Vietnam, on the evening of April 23, in a major address at Tulane University, President Gerald Ford announced that the war in Vietnam was "finished as far as America is concerned." The audience of students gave him a standing ovation.

... On the morning of April 29, Operation Frequent Wind began. The exercise involved the evacuation of American and Vietnamese civilians and military personnel from Tan Son Nhut Airbase and from the American Embassy in Saigon to the Seventh Fleet in the South China Sea. The operation was completed early in the morning of April 30, a few hours before the surrender of the South. When the last Marines were airlifted from the roof of the American Embassy on the morning of April 30, they left behind more than four hundred Vietnamese waiting to be airlifted out of the compound. Throughout the previous day and night those same Vietnamese had been promised again and again that they would never be abandoned by the United States. They watched in silence as the last American helicopter left the roof of the Embassy. Even the final American promise to Vietnam had been broken.

Thomas Polgar was CIA Saigon station chief. This is his last transmission from the embassy before destroying the communications equipment:

“This will be final message from Saigon station,” Mr. Polgar wrote. “It has been a long and hard fight and we have lost. This experience, unique in the history of the United States, does not signal necessarily the demise of the United States as a world power.

“The severity of the defeat and the circumstances of it, however, would seem to call for a reassessment... Those who fail to learn from history are forced to repeat it. Let us hope that we will not have another Vietnam experience and that we have learned our lesson.”

From his oral history:

I didn't have a great emotional attachment to Vietnam like some of my colleagues who really fell in love with the country. But in the end, seeing how it ended, I thought that we really did a miserable job for these people and they would have been much better off if we had never gone there in the first place.

Our reception on the Blue Ridge [ship] showed the American military at its worst. They started out by searching everybody. I think the ambassador was the only one who was not searched. And in normal peacetime I far outranked the admiral commanding the ship. Nobody objected, though. We were tired. We were pretty placid. And we were a defeated army.

As we left Saigon, there was an American soldier standing at the back door of the plane, and he was shooting at the ground. He just kept shooting as we pulled away. And people were still crying inside the plane. I watched the soldier shooting and I wondered what he was shooting at. I think he was just trying to show American power one last time. ... But I can only guess. I don't think he knew what was happening, either. We were all confused.

Anyway, that was my last look at my country. I saw Vietnam as we flew away and at the back door of the plane was a soldier with a gun shooting at it.

Tears before the Rain: An Oral History of the Fall of South Vietnam by Larry Engelmann
CBS camera-man Mike Marriott was on the last plane to escape from Danang before it fell in the spring of 1975. The scene was pure chaos: thousands of panic-stricken Vietnamese storming the airliner, soldiers shooting women and children to get aboard first, refugees being trampled to death. Marriott remembers standing at the door of the aft stairway, which was gaping open as the plane took off. "There were five Vietnamese below me on the steps. As the nose of the aircraft came up, because of the force and speed of the aircraft, the Vietnamese began to fall off. One guy managed to hang on for a while, but at about 600 feet he let go and just floated off--just like a skydiver.... What was going through my head was, I've got to survive this, and at the same time, I've got to capture this on film. This is the start of the fall of a country. This country is gone. This is history, right here and now."
In Tears Before the Rain, a stunning oral history of the fall of South Vietnam, Larry Engelmann has gathered together the testimony of seventy eyewitnesses (both American and Vietnamese) who, like Mike Marriott, capture the feel of history "right here and now." We hear the voices of nurses, pilots, television and print media figures, the American Ambassador Graham Martin, the CIA station chief Thomas Polgar, Vietnamese generals, Amerasian children, even Vietcong and North Vietnamese soldiers.
Through this extraordinary range of perspectives, we experience first-hand the final weeks before Saigon collapsed, from President Thieu's cataclysmic withdrawal from Pleiku and Kontum, (Colonel Le Khac Ly, put in command of the withdrawal, recalls receiving the order: "I opened my eyes large, large, large. I thought I wasn't hearing clearly") to the last-minute airlift of Americans from the embassy courtyard and roof ("I remember when the bird ascended," says Stuart Herrington, who left on one of the last helicopters, "It banked, and there was the Embassy, the parking lot, the street lights. And the silence").

Biden, July 8: "There’s going to be no circumstance where you see people being lifted off the roof of a embassy in the—of the United States from Afghanistan....The likelihood there’s going to be the Taliban overrunning everything and owning the whole country is highly unlikely." pic.twitter.com/VO17x0wKi9