How Dominic Cummings And The Warner Brothers Saved The UK 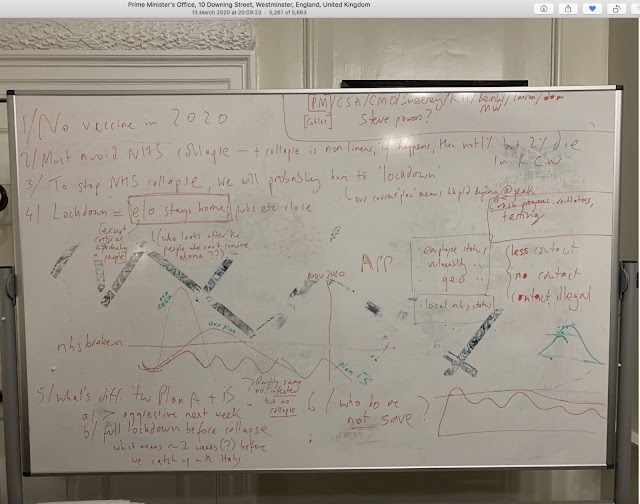 Photo above shows the white board in the Prime Minister's office which Dominic Cummings and team (including the brothers Marc and Ben Warner) used to convince Boris Johnson to abandon the UK government COVID herd immunity plan and enter lockdown. Date: March 13 2020.
Only now can the full story be told. In early 2020 the UK government had a COVID herd immunity plan in place that would have resulted in disaster. The scientific experts (SAGE) advising the government strongly supported this plan -- there are public, on the record briefings to this effect. These are people who are not particularly good at order of magnitude estimates and first-principles reasoning.
Fortunately Dom was advised by the brothers Marc and Ben Warner (both physics PhDs, now working in AI and data science), DeepMind founder Demis Hassabis, Fields Medalist Tim Gowers, and others. In the testimony (see ~23m, ~35m, ~1h02m, ~1h06m in the video below) he describes the rather dramatic events that led to a switch from the original herd immunity plan to a lockdown Plan B. More details in this tweet thread.
See also How Brexit was won, and the unreasonable effectiveness of physicists.
I checked my emails with Dom during February and March, and they confirm his narrative. I wrote the March 9 blog post Covid-19 Notes in part for Dom and his team, and I think it holds up over time. Tim Gowers' document reaches similar conclusions.
Seven hours of riveting Dominic Cummings testimony from earlier today.
Transcript.
Shorter summary video (Channel 4). Summary live-blog from the Guardian.
This is a second white board used in the March 14 meeting with Boris Johnson: 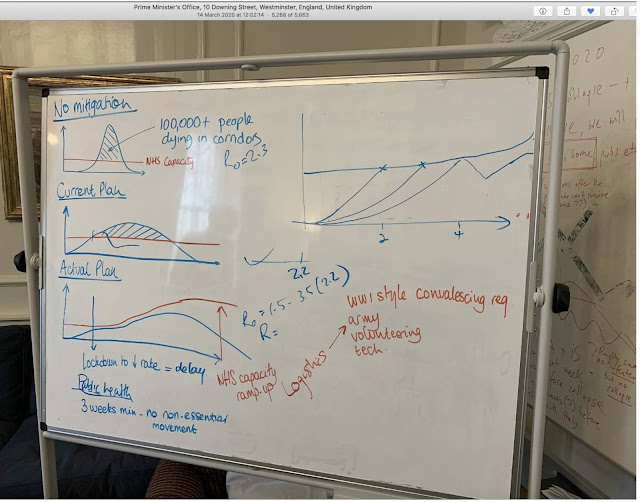