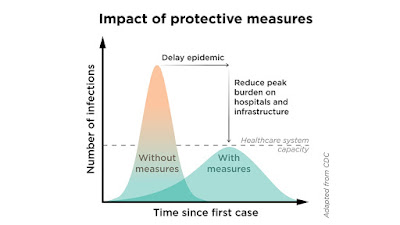 First some basic assumptions, for which I think the evidence is strong (reference):


1. R0 ~ (2-3) or higher in a permissive environment -- no strong efforts at social distancing, quarantine, etc.

2. Fatality rate: roughly 1 percent of cases, heavily concentrated in older individuals and/or those with pre-existing conditions. Note this assumes a well-functioning health system and resources for the 5% or so of cases that need intensive care. See below.

USA has perhaps ~1M total hospital beds, over half already occupied, and perhaps 50k ICU spaces. For those infected, the distribution of severity is roughly (again, concentration in vulnerable sub-populations):

So roughly 1M infected at a given time would overwhelm US health capabilities. We probably have at least ~1000 infected in the country at the moment, so in the absence of serious measures like social distancing (cancellation of sporting events, large meetings, moving to K12 and college distance learning, etc.), we would reach the health system breaking point in about a month. Many other countries, in Europe and elsewhere, are facing a similar situation.

Whether we impose draconian social measures (which would have a strongly negative effect on cafes, restaurants, hotels, airlines, theaters, etc.) or let COVID-19 infect millions of people, we are in for at least a one quarter downturn (recession?) with the possibility of more significant nonlinear events (complete market collapse, systemic failures). Traders already understand this, which is why equities are in huge decline despite a 50 bp Fed rate cut last week. I went largely to cash already...

We have technology that could help us fight the epidemic. The article below, in the Journal of the American Medical Association, describes how Taiwan successfully handled the epidemic -- less than 50 cases! -- despite close proximity and extensive travel to China. (Note, Taiwan in Jan-Feb is a bit warmer than Milan, but I don't think climate is the entire reason for their good performance...) Google and Apple have these technical (geolocation, tracking) capabilities, but they don't like to emphasize it to the public.

Taiwan is 81 miles off the coast of mainland China and was expected to have the second highest number of cases of coronavirus disease 2019 (COVID-19) due to its proximity to and number of flights between China.1 The country has 23 million citizens of which 850 000 reside in and 404 000 work in China.2,3 In 2019, 2.71 million visitors from the mainland traveled to Taiwan.4 As such, Taiwan has been on constant alert and ready to act on epidemics arising from China ever since the severe acute respiratory syndrome (SARS) epidemic in 2003. Given the continual spread of COVID-19 around the world, understanding the action items that were implemented quickly in Taiwan and assessing the effectiveness of these actions in preventing a large-scale epidemic may be instructive for other countries.

COVID-19 occurred just before the Lunar New Year during which time millions of Chinese and Taiwanese were expected to travel for the holidays. Taiwan quickly mobilized and instituted specific approaches for case identification, containment, and resource allocation to protect the public health. Taiwan leveraged its national health insurance database and integrated it with its immigration and customs database to begin the creation of big data for analytics; it generated real-time alerts during a clinical visit based on travel history and clinical symptoms to aid case identification. It also used new technology, including QR code scanning and online reporting of travel history and health symptoms to classify travelers’ infectious risks based on flight origin and travel history in the past 14 days. Persons with low risk (no travel to level 3 alert areas) were sent a health declaration border pass via SMS (short message service) messaging to their phones for faster immigration clearance; those with higher risk (recent travel to level 3 alert areas) were quarantined at home and tracked through their mobile phone to ensure that they remained at home during the incubation period.

Google + Apple + cell carriers have the data to detect near collisions (proximity) between COVID-19 spreaders (once diagnosed) and other individuals. This can be done anonymously: i.e., public health services get a warning that a spreader visited nursing home X on timestamp T without naming the spreader. Another alternative (see WSJ video below) is to have an OPT-IN app that checks location history and warns if you were in close proximity to a spreader. The PRC government version of this app has been used by 200M+ Chinese already -- note it's OPT-IN. The companies above have the data to do this but don't like it to be known that they can.


Note Added: Latest results from the beginnings of broader testing in Seattle suggest that the virus is widespread in the community already. The number of cases detected is primarily limited by number of tests:


Nature: “We are past the point of containment,” says Helen Chu, an infectious-disease specialist at the University of Washington School of Medicine (UW Medicine) in Seattle. “So now we need to keep the people who are vulnerable from getting sick.”

I checked the weather records for Seattle in February 2020: daily highs in the mid-40s to mid-50s. There is very little chance that wintry areas of the US will be warmer than this over the next 30 days, even with an early spring. So I don't see that US spread in those regions can be mitigated by anything less than social distancing and other strong measures. Weather will probably not save us.

Front line tweets from Italian doctors describe medical resources pushed to the breaking point. I hope we do not experience this in the US, but I don't see how we will avoid it: [1] [2]

Some interesting information about transmission (surfaces, air in confined spaces) at the beginning; Italian overload at 17m; S. Korean data at 19m.