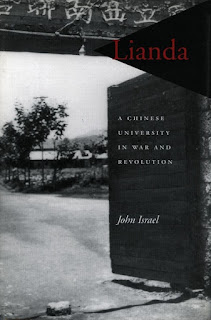 The videos below are about Lianda, a wartime university located in Kunming that was formed by the merger of Peking University, Tsinghua University, and Nankai University.

Lianda: A Chinese University in War and Revolution

In the summer of 1937, Japanese troops occupied the campuses of Beijing’s two leading universities, Beida and Qinghua, and reduced Nankai, in Tianjin, to rubble. These were China's leading institutions of higher learning, run by men educated in the West and committed to modern liberal education. The three universities first moved to Changsha, 900 miles southwest of Beijing, where they joined forces. But with the fall of Nanjing in mid-December, many students left to fight the Japanese, who soon began bombing Changsha.

In February 1938, the 800 remaining students and faculty made the thousand-mile trek to Kunming, in China’s remote, mountainous southwest, where they formed the National Southwest Associated University (Lianda). In makeshift quarters, subject to sporadic bombing by the Japanese and shortages of food, books, and clothing, students and professors did their best to conduct a modern university. In the next eight years, many of China’s most prominent intellectuals taught or studied at Lianda. ...

Lianda’s wartime saga crystallized the experience of a generation of Chinese intellectuals, beginning with epic journeys, followed by years of privation and endurance, and concluding with politicization, polarization, and radicalization, as China moved from a war of resistance against a foreign foe to a civil war pitting brother against brother. The Lianda community, which had entered the war fiercely loyal to the government of Chiang Kai-shek, emerged in 1946 as a bastion of criticism of China’s ruling Guomindang party. Within three years, the majority of the Lianda community, now returned to its north China campuses in Beijing and Tianjin, was prepared to accept Communist rule. ...

My father attended this university at age 16, admitted via Tsinghua. Among its most famous alumni are the Nobel Prize winning theoretical physicists C.N. Yang and T.D. Lee. As the university only existed for 8 years, there are very few alumni still living.
I came across the 一条 Yit channel because I recently bought an Android Smart TV and it caused an increase in consumption of YouTube, etc. I got the TV to use as a big monitor but it's great for content as well. One of the most enjoyable things I do with it is watch seminars (e.g., in theoretical physics or AI)!
In case you are wondering I bought a 70inch HiSense on sale for under $400: good 4k picture and sound -- highly recommended!
Posted by Steve Hsu at 8:33 AM