This is an interesting discussion of PRC Anti-Ship Ballistic Missiles (ASBM), including the DF21, DF26, and DF17 systems. You can set the captions to English if necessary.
In response to US activity in the South China Sea and elsewhere, PRC recently conducted a test of DF21 and DF26 in the open ocean. Reportedly, a US "Cobra Ball" RC135S missile intelligence aircraft was present to monitor the activity. 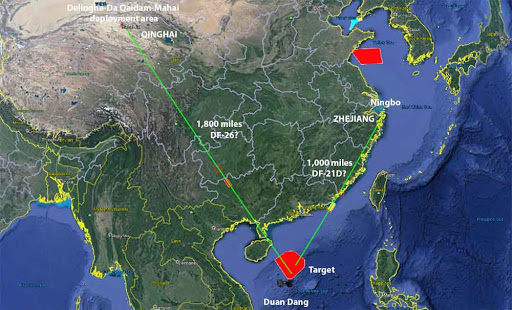 The YouTube video discusses PRC ASBM capabilities, including
1. Infrared and radar final targeting
2. Maneuver capability
3. Capability of the missile to receive (ground based) over-the-horizon radar and satellite information while in flight.
These are the frequent subject of speculation in Western sources: "There is a long kill chain and we are not sure whether it is operational..." etc.
Assuming that PRC ASBM have these capabilities, which seems quite plausible to me, this test was presumably a demonstration for the US, to make sure that our military appreciates the PLARF ability to hit a moving target (e.g., US aircraft carrier) at sea. Once this mutual understanding is in place, FONOPs in the South China Sea become mere theatrics for the dim witted.
See related posts
The Future of the U.S. Aircraft Carrier: Fearsome Warship or Expensive Target? (Heritage panel; video)
On the military balance of power in the Western Pacific (South China Sea, ASBM, etc.)
Machine intelligence threatens overpriced aircraft carriers (first principles analysis of final targeting problem)
A2AD fait accompli? (Yaogan satellite surveillance of the western Pacific)
Posted by Steve Hsu at 11:45 AM