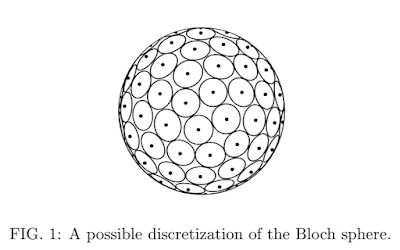 This is a new paper which I only recently found the time to write up, although I have been thinking about the ideas off and on for some time.

It extends ideas first discussed in two papers with A. Zee and R. Buniy: Is Hilbert space discrete? and Discreteness and the origin of probability in quantum mechanics.

Slides from a related talk at Caltech IQIM.

Quantum gravitational effects suggest a minimal length, or spacetime interval, of order the Planck length. This in turn suggests that Hilbert space itself may be discrete rather than continuous. One implication is that quantum states with norm below some very small threshold do not exist. The exclusion of what Everett referred to as maverick branches is necessary for the emergence of the Born Rule in no collapse quantum mechanics. We discuss this in the context of quantum gravity, showing that discrete models (such as simplicial or lattice quantum gravity) indeed suggest a discrete Hilbert space with minimum norm. These considerations are related to the ultimate level of fine-graining found in decoherent histories (of spacetime geometry plus matter fields) produced by quantum gravity.


No collapse (or many worlds) versions of quantum mechanics are often characterized as extravagant, because of the many branches of the wavefunction. However it is also extravagant to postulate that spacetime or Hilbert space are infinitely continuous. Continuous Hilbert space requires that for any two choices of orientation of a qubit spin (see Figure 1), no matter how close together, there are an infinite number of physically distinct states between them, with intermediate orientation. Instead, there may only be a finite (but very large) number of distinct orientations allowed, suggesting a minimum norm in Hilbert space. No experiment can probe absolute continuity, and indeed there seem to be fundamental limits on such experiments, arising from quantum gravity itself.

We illustrated a direct connection between discrete spacetime (the simplex length a) and discrete Hilbert space (minimum non-zero distance in Hilbert space produced by time evolution), in a specific class of quantum gravity models based on Feynman path integrals. It may be the case that maximally fine-grained decoherent histories generated within quantum gravity have discrete geometries and exist in a discrete Hilbert space. Consequently histories with sufficiently small norm are never generated, thereby solving Everett's problem with maverick branches. In the remaining branches, deviations from Born Rule probabilities are almost entirely hidden from semi-classical observers. ...

The Quantum Simulation Hypothesis: Do we live in a quantum multiverse simulation?