It's been almost 10 years since I made the post Are you Gork?

Over the last decade, both scientists and non-scientists have become more confident that we will someday create:

This change in zeitgeist makes the thought experiment proposed below much less outlandish. What, exactly, does Gork perceive? Why couldn't you be Gork? (Note that the AGI in Gork can be an entirely classical algorithm even though he exists in a quantum simulation.) 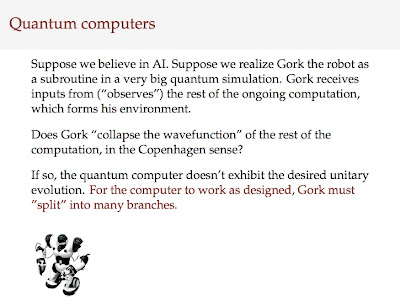 1) Could you be Gork the robot? (Do you split into different branches after observing the outcome of, e.g., a Stern-Gerlach measurement?)

I have a soul and Gork doesn't!  Copenhagen people, please use exit on your left.

I don't believe that quantum computers will work as designed, e.g., sufficiently large algorithms or subsystems will lead to real (truly irreversible) collapse. Macroscopic superpositions that are too big (larger than whatever was done in the lab last week!) are impossible.

QM is only an algorithm for computing probabilities -- there is no reality to the quantum state or wavefunction or description of what is happening inside a quantum computer. Tell this to Gork!

Stop bothering me -- I only care about real stuff like the Higgs mass / SUSY-breaking scale / string Landscape / mechanism for high-Tc / LIBOR spread / how to generate alpha.

Just as A. and B. above have become less outlandish assumptions, our ability to create large and complex superposition states with improved technology (largely developed for quantum computing; see Schrodinger's Virus) will make the possibility that we ourselves exist in a superposition state less shocking. Future generations of physicists will wonder why it took their predecessors so long to accept Many Worlds.

Bonus! I will be visiting Caltech next week (Tues and Weds 1/8-9). Any blog readers interested in getting a coffee or beer please feel free to contact me :-)
Posted by Steve Hsu at 12:50 PM