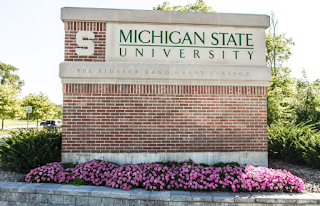 I've added some comments in [ ..brackets.. ] to the article excerpt below. More background.


WSJ: ‘We are scientists, seeking truth,” Michigan State University physicist Stephen Hsu wrote in a 2018 blog post. “We are not slaves to ideological conformity.” That might have been too optimistic. Last week MSU’s president, Samuel L. Stanley Jr., yielded to a pressure campaign, based in part on that post, and asked Mr. Hsu to resign as senior vice president for research and innovation.

[ This is obviously a very serious accusation. It is contradicted by PUBLIC REMARKS I have made in multiple interviews over the years, as well as in blog posts. ]

Mr. Hsu says these accusations “were made in bad faith.” Take that 2018 blog post, which responded to New York Times articles that, in his words, linked “genetic science to racism and white supremacy.” In it, he wrote: “All good people abhor racism. I believe that each person should be treated as an individual, independent of ancestry or ethnic background. . . . However, this ethical position is not predicated on the absence of average differences between groups. I believe that basic human rights and human dignity derive from our shared humanity, not from uniformity in ability or genetic makeup.” Mr. Hsu doesn’t work in this field but rejects the idea that scientists should categorically exclude the possibility of average genetic differences among groups.

[ To be precise, in THAT BLOG POST I am defending researchers in genomics, at universities like Oxford, Harvard, and Columbia (see papers cited there), who study signals of recent natural selection from computational analysis of many human genomes. In 2018 the New York Times had attempted to create a moral panic, labeling them as "racists" ... Again, this is not my area of science -- I am defending the right of others to do their research. ]

In a 2011 post, Mr. Hsu argued that standardized tests are predictive of the quality of graduate-school candidates. The post mentioned nothing about race, but the union imputed to him a belief “that lack of Black & Hispanic representation in higher ed reflects lower ability, despite evidence these tests negatively impact diversity.”

[ The reporter is correct: RACE IS NEVER MENTIONED IN THAT BLOG POST. It merely reviews published results from very large studies, showing the predictive power of standardized tests in graduate and professional school outcomes. These results have nothing to do with race. For example, professors on admissions committees might be interested in whether undergraduate GPA or GRE score are better predictors of success. This kind of analysis is necessary to answer that question.

However, this topic is heavily politicized and very few people, even professors, are familiar with the scientific results. But experts in psychometrics and personnel selection all know that these tests have real world utility. ]

The union also faulted him for having “directed funding to research downplaying racism in bias in police shootings.” The MSU professor who conducted that work, psychologist Joe Cesario, tells me that “we had no idea what the data was going to be, what the outcome was going to be, before we did this study.” Mr. Cesario has collected evidence from a simulator and from real-world interactions between police and citizens. He concluded that “the nature of the interaction really matters the most, and officers were not more likely to be ready to shoot upon encountering a black versus white citizen.”

[ Several years ago Cesario was granted a rare opportunity to study police shootings and officer behavior in simulators in a large city. My office provided him with a small amount of funding to create realistic simulator video of police stops and other situations. This is an important topic to study if we want to understand and improve policing. ]

A June 3 op-ed in these pages cited Mr. Cesario’s work, and the MSU communications team highlighted the mention in the June 9 edition of their email newsletter, InsideMSU. The next day, the Graduate Employees Union denounced Mr. Hsu. By June 11, editors of the newsletter had apologized “for including the item and for the harm it caused.” Hundreds of MSU students and employees signed petitions calling for Mr. Hsu to be fired from the administration.

[ NO, YOU ARE NOT MISTAKEN: THIS IS ORWELLIAN. YES THIS REALLY HAPPENED TO A PROMINENT RESEARCHER ON OUR CAMPUS WHO IS DOING VERY IMPORTANT WORK. YES, THEY APOLOGIZED FOR CALLING ATTENTION TO HIS WORK. YES, IT IS CHILLING. ]

Mr. Hsu says he felt compelled to step down because he served at the pleasure of the president. But he thinks Mr. Stanley handled the matter badly. “The first action of the university should be to investigate, find the truth, and defend the person if the claims are false.” Mr. Hsu says MSU undertook no such investigation.

[ I am among a shrinking subset of the faculty that believes the pursuit of truth should be the core value of a university.

Almost 2000 PEOPLE SIGNED THE PETITION supporting me, including hundreds of professors from MSU and around the world. Many letters from prominent scientists were sent to the president -- my guess is about 30, SOME OF WHICH ARE PUBLIC. MSU conducted no investigation of the facts. ]

... “I don’t personally believe that kind of enforcing a higher conduct to administrators will necessarily chill faculty,” Mr. Bird says.

Mr. Cesario disagrees. It’s “bad or worse that they are doing this to an administrator,” he says. “If anybody should be allowed to explore all topics, speak on all topics, and go where the data leads them, it’s administrators.” He expects the activists who won Mr. Hsu’s dismissal won’t stop “pushing for a narrowing of what kinds of topics people can talk about, or what kinds of conclusions people can come to.” The number of administrators willing to defend scientific inquiry, Mr. Cesario adds, is “now down by one.”

On Steve Hsu and the Campaign to Thwart Free Inquiry (Quillette)

I Cited Their Study, So They Disavowed It: If scientists retract research that challenges reigning orthodoxies, politics will drive scholarship (Wall Street Journal July 8)

Conservative author cites research on police shootings and race. Researchers ask for its retraction in response (The College Fix, July 8)


I'd recommend directly reading the Twitter accusations as well as the actual blog posts in question and Hsu's rebuttal. There's nothing like reading the primary sources for yourself. The most precise secondary source on this is probably WSJ.

You can see for yourself that none of the blog posts in question are studies done by Hsu himself. They are discussions of actual research papers published by other scientists in top-tier journals (Cell, Nature, Science, etc.). I've followed Hsu's blog for years, and he is always very careful to make clear that he doesn't think current research clearly supports genetic IQ differences. He is being targeted here just because he doesn't categorically rule out the possibility of genetic differences between populations and kowtow to the wokeness overlords. Some prominent psychologists and geneticists who signed his support letter include Steven Pinker, Robert Plomin, Robert Gordon, Linda Gottfredson, Jonathan Haidt, Lee Jussim... these are just a few I caught quickly scrolling through. Hsu is well within the mainstream and the controversy is pretty manufactured IMO.

The article and accusations makes it sound like Hsu's reactions to the George Floyd murder was to fund research that finds no racial disparities in police killing, which is incorrect. He was the Senior Vice President for Research and Innovation at MSU and one of his responsibilities is to allocate funding to different research projects. He allocated funding to this professor (Joe Cesario) before knowing what kind of conclusions his study would find later. This funding was decided a few years ago and the research concluded last year, well before the George Floyd incident. You can read a letter co-written by Joe Cesario here. The lab's research is actually really cool - they build a shooting simulator and subject an entire police department (few hundred officers at Milwaukee PD I believe) to different tests, and measure response times and decisions to shoot, etc. For more info you can read his papers or the NSF award abstract here.

I consider this a great loss, because he was one of the most highly positioned Asian-American academics and he was not shy about representing us and criticizing excessive affirmative action policies (although he favors having some mild preferences). A few years back, he and others made a very strong push for election to Harvard's alumni board of overseers on a slate for increasing admissions transparency. If he had succeeded, he would have done more for equality for Asians in this country than anyone else in recent memory. His efforts led to others taking up the mantle in the recent Harvard affirmative action case. It's perhaps because of this that he started to have a target on his back.

Email ThisBlogThis!Share to TwitterShare to FacebookShare to Pinterest
Labels: MSU