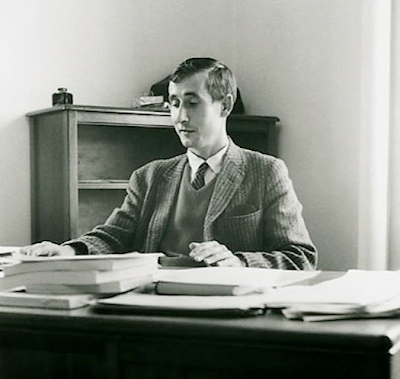 He was 96 when he passed last Friday, one of the last giants who participated in the creation of Quantum Electrodynamics and modern quantum field theory.

He has appeared many times on this blog. Below are a few links.

The intestinal fortitude of Freeman Dyson: an account of his visit to the University of Oregon.


The evening began ominously. Dyson had a stomach bug -- he declined to eat anything at dinner, and made several emergency trips to the bathroom. After dinner he fell asleep on a couch in the physics building. Facing a packed auditorium, with people sitting in the aisles and filling an adjoining overflow room with video monitor, the other organizers and I decided that we'd offer Freeman the chance to call the whole thing off when we woke him up. Luckily for everyone, he felt much better after the nap, and was obviously energized by the large and enthusiastic crowd. After we finished the Q&A, he turned to me and said "Well, your questions cured my bug!"


The prodigy in question, Freeman Dyson, now middle-aged, stared ahead, his incessant concentration on the road unbroken. ... I asked him whether as a boy he had speculated much about his gift. Had he asked himself why he had this special power? Why he was so bright?

Dyson is almost infallibly a modest and self-effacing man, but tonight his eyes were blank with fatigue, and his answer was uncharacteristic.

“That’s not how the question phrases itself,” he said. “The question is: why is everyone else so stupid?”

I want to emphasize that Dyson was a lovely and gentle person. The answer above is indeed uncharacterstic. But it is true...

Profile in NYTimes Magazine (2009). Below is a sample of work produced by Dyson between the ages of 5 and 9.

From Disturbing the Universe, one of my favorite scientific memoirs. It describes dramatic events of Dyson's early life: childhood in England, the war, QED, Feynman and Oppenheimer.


... In that spring of 1948 there was another memorable event. Hans [Bethe] received a small package from Japan containing the first two issues of a new physics journal. Progress of Theoretical Physics, published in Kyoto. The two issues were printed in English on brownish paper of poor quality. They contained a total of six short articles. The first article in issue No. 2 was called "On a Relativistically Invariant Formulation of the Quantum Theory of Wave Fields," by S. Tomonaga of Tokyo University. Underneath it was a footnote saying, "Translated from the paper . . . (1943) appeared originally in Japanese." Hans gave me the article to read. It contained, set out simply and lucidly without any mathematical elaboration, the central idea of Julian Schwinger's theory. The implications of this were astonishing. Somehow or other, amid the ruin and turmoil of the war, totally isolated from the rest of the world, Tomonaga had maintained in Japan a school of research in theoretical physics that was in some respects ahead of anything existing anywhere else at that time. He had pushed on alone and laid the foundations of the new quantum electrodynamics, five years before Schwinger and without any help from the Columbia experiments. He had not, in 1943, completed the theory and developed it as a practical tool. To Schwinger rightly belongs the credit for making the theory into a coherent mathematical structure. But Tomonaga had taken the first essential Step. There he was, in the spring of 1948, sitting amid the ashes and rubble of Tokyo and sending us that pathetic little package. It came to us as a voice out of the deep.

A few weeks later, Oppy received a personal letter from Tomonaga describing the more recent work of the Japanese physicists. They had been moving ahead fast in the same direction as Schwinger. Regular communications were soon established. Oppy invited Tomonaga to visit Princeton, and a succession of Tomonaga's students later came to work with us at Princeton and at Cornell. When I met Tomonaga for the first time, a letter to my parents recorded my immediate impression of him "He is more able than either Schwinger or Feynman to talk about ideas other than his own. And he has enough of his own too. He is an exceptionally unselfish person." On his table among the physics journals was a copy of the New Testament.

Rest in Peace, Freeman Dyson.
Posted by Steve Hsu at 7:24 AM