The Double Helix: "to understand what life is, we must know how genes act" 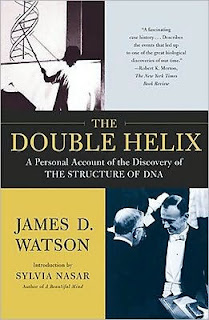 I'll be visiting Cold Spring Harbor Laboratory next week to give a talk. I decided to reread Watson's The Double Helix in advance of my trip. I think I originally read it while an undergraduate, and hadn't really looked at it since.

There are striking (at least to me) aspects of even the first few pages of the book. When I went to college, physics students were already told that biology -- specifically, molecular biology, was the future and that physics was already such a mature subject that there was little left to discover. In retrospect this advice was not without merit, but my personal opinion, having spent an entire career as a physicist, and having also done some work in biology (albeit in a very computational area), is that there is nothing more valuable than the training one receives in theoretical physics. To deny that this training has turned out to be useful in a variety of other fields, including Biology, Computer Science, Engineering, Finance, Data Science, ... is simply to deny reality.

For those interested in the history of science, the deep workings of academia, and intellectual history, I recommend investigating the origins of molecular biology. One has to admit that molecular methods revolutionized biology, and continue to do so. Yet, many molecular biology departments were established (originally with names like BioPhysics!) against the wishes of "real'' biologists of the era. It is telling that even today, at many universities, the Department of Molecular Biology (or equivalent) is a separate department from the one with more classical roots (to use Bialek's terminology below). This, despite the fact that molecular techniques are now universally applied and central to most advances in biology.

A new field was created by invaders from outside; it grew and advanced enormously; it eventually ate its predecessor...

Watson on Crick (The Double Helix):


Already he is much talked about, usually with reverence, and someday he may be considered in the category of Rutherford or Bohr. But this was not true when, in the fall of 1951, I came to the Cavendish Laboratory of Cambridge University to join a small group of physicists and chemists working on the three-dimensional structures of proteins. At that time he was thirty-five, yet almost totally unknown. Although some of his closest colleagues realized the value of his quick, penetrating mind and frequently sought his advice, he was often not appreciated...

For almost forty years Bragg, a Nobel Prize winner and one of the founders of crystallography, had been watching X-ray diffraction methods solve structures of ever-increasing difficulty. The more complex the molecule, the happier Bragg became when a new method allowed its elucidation.

... Somewhere between Bragg the theorist and Perutz the experimentalist was Francis, who occasionally did experiments but more often was immersed in the theories for solving protein structures.

... Before my arrival in Cambridge, Francis only occasionally thought about deoxyribonucleic acid (DNA) and its role in heredity. This was not because he thought it uninteresting. Quite the contrary. A major factor in his leaving physics and developing an interest in biology had been the reading in 1946 of What Is Life? by the noted theoretical physicist Erwin Schrodinger. This book very elegantly propounded the belief that genes were the key components of living cells and that, to understand what life is, we must know how genes act.

From the 2013 post In search of principles: when biology met physics:


This is an excerpt from the introduction of Bill Bialek's book on biophysics. Bialek was a professor at Berkeley when I was a graduate student, but has since moved to Princeton. See also For the historians and the ladies, As flies to wanton boys are we to the gods and Prometheus in the basement.


... In one view of history, there is a direct path from Bohr, Delbruck and Schrodinger to the emergence of molecular biology. Certainly Delbruck did play a central role, not least because of his insistence that the community should focus (as the physics tradition teaches us) on the simplest examples of crucial biological phenomena, reproduction and the transmission of genetic information. The goal of molecular biology to reduce these phenomena to interactions among a countable set of molecules surely echoed the physicists’ search for the fundamental constituents of matter, and perhaps the greatest success of molecular biology is the discovery that many of these basic molecules of life are universal, shared across organisms separated by hundreds of millions of years of evolutionary history. Where classical biology emphasized the complexity and diversity of life, the ﬁrst generation of molecular biologists emphasized the simplicity and universality of life’s basic mechanisms, and it is not hard to see this as an inﬂuence of the physicists who came into the ﬁeld at its start. 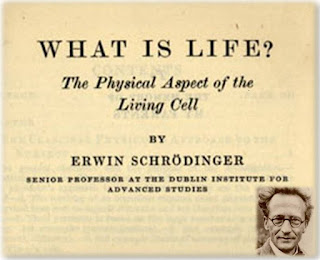 See also On Crick and Watson:


Crick, 35, had already had a career in physics interrupted by the war and despaired of making his great contribution to science. Watson was a callow 23, fresh from Indiana.


[Chargaff]: It was clear to me that I was faced with a novelty: enormous ambition and aggressiveness, ... Thinking of the many sweaty years of making preparations of nucleic acids and of the innumerable hours spent on analyzing them, I could not help being baffled. I am sure that, had I had more contact with, for instance, theoretical physicists, my astonishment would have been less great. In any event, there they were, speculating, pondering, angling for information. ...

Watson: ... to understand what life is, we must know how genes act.

This program is still being carried out!

Abstract: The talk is divided into two parts. The first gives an overview of the rapidly advancing area of genomic prediction of disease risks using polygenic scores. We can now identify risk outliers (e.g., with 5 or 10 times normal risk) for about 20 common disease conditions, ranging from diabetes to heart diseases to breast cancer, using inexpensive SNP genotypes (i.e., as offered by 23andMe). We can also predict some complex quantitative traits (e.g., adult height with accuracy of few cm, using ~20k SNPs). I discuss application of these results in precision medicine as well as embryo selection in IVF, and give some details about genetic architectures. The second part covers the AI/ML used to build these predictors, with an emphasis on "sparse learning" and phase transitions in high dimensional statistics.

I will also present some new material (not yet published) on pleiotropy and also on within-family (sibling) validation of genomic predictors.
Posted by Steve Hsu at 8:54 AM