The figures below are from the recently completed Report of the University of California Academic Council Standardized Testing Task Force. Note the large sample sizes.

1. SAT and High School GPA (HSGPA) are both useful (and somewhat independent) predictors of college success. In terms of variance accounted for, we have the inequality:

There are some small deviations from this pattern, but it seems to hold overall. I believe that GPA has a relatively larger loading on conscientiousness (work ethic) than cognitive ability, with SAT the other way around. By combining the two we get more information than from either alone. 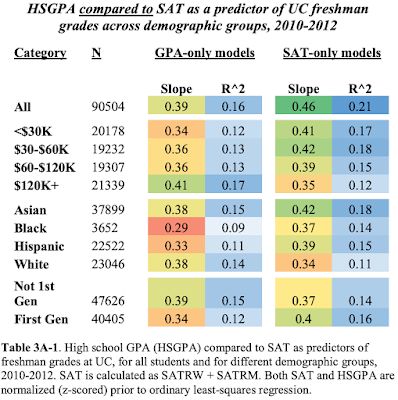 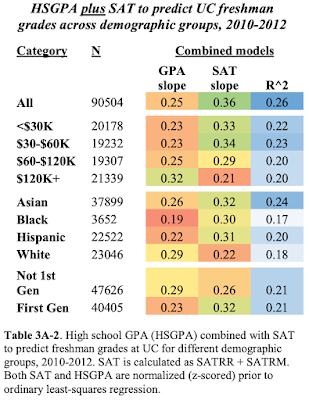 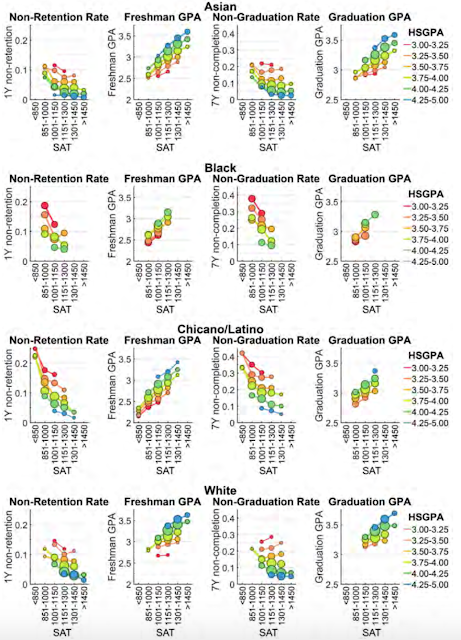 There is not much new here. In graduate admissions the undergraduate GPA and the GRE general + subject tests play a role similar to HSGPA and SAT. See GRE and SAT Validity.

See Correlation and Variance to understand better what the R^2 numbers above mean. R^2 ~ 0.26 means the correlation between predictor and outcome variable (e.g., freshman GPA) is R ~ 0.5 or so.

Test Preparation and SAT scores: "...combined effect of coaching on the SAT I is between 21 and 34 points. Similarly, extensive meta-analyses conducted by Betsy Jane Becker in 1990 and by Nan Laird in 1983 found that the typical effect of commercial preparatory courses on the SAT was in the range of 9-25 points on the verbal section, and 15-25 points on the math section."
Posted by Steve Hsu at 12:37 PM