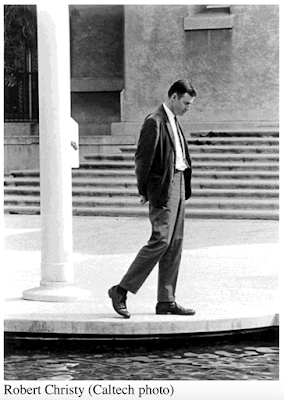 I always wondered who first worked out the theory of Electromagnetic Pulses (EMP) produced by nuclear weapons. That an EMP would result from a nuclear explosion was known from the beginning:


During the first United States nuclear test on 16 July 1945, electronic equipment was shielded because Enrico Fermi expected the electromagnetic pulse. The official technical history for that first nuclear test states, "All signal lines were completely shielded, in many cases doubly shielded. In spite of this many records were lost because of spurious pickup at the time of the explosion that paralyzed the recording equipment."[2] During British nuclear testing in 1952–1953, instrumentation failures were attributed to "radioflash", which was their term for EMP.

But it's far from obvious that: prompt gamma rays from the nuclear explosion lead to Compton effect ionization, and the resulting Compton current interacts with the Earth's magnetic field to produce coherent synchrotron radiation forming a dangerous EM pulse. 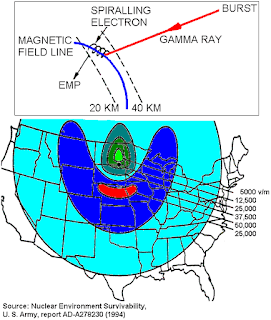 From Achieving the Rare: Robert F. Christy's Journey in Physics and Beyond:


During Cold War years in the 1950’s, a number of mysterious communication disruptions occurred. It was feared that the communications had been sabotaged in some way by the Soviet Union. Robert was at Caltech at the time, but was also a consultant for the Rand Corporation, and became aware of this phenomenon.

It had been known that atomic bombs could sometimes cause problems with electronics in the vicinity, but it was Robert who single-handedly worked out the physics by which atomic explosions in the upper atmosphere would produce an electromagnetic pulse (EMP) that could have catastrophic effects on circuits on the ground at very great distances, and could thereby disrupt communications. He was thus the first to connect the disruption of communications with the high- altitude nuclear explosions. He wrote this up as a classified report. It should be noted, however, that the warning in this report did not prevent the U.S. from carrying out the very-high-altitude “Starfish Prime” test of 1962. In this test a 1.4 megaton bomb was exploded over the Pacific Ocean at an altitude of 250 miles, causing electrical damage in Hawaii (about 900 miles away). The Soviets conducted similar high-altitude tests over Kazakhstan in the same year. These caused even more extensive damage since they were above an inhabited area rather than over the ocean.

The EMP effect of high-altitude atomic explosions is now widely known, but it was Robert Christy who first brought this phenomenon to the attention of the U.S. government. ...

[ See also articles by Longmire and Pfeffer. Perhaps the Soviets were ahead of Christy? Kompaneets, A. S., Radio Emission from an Atomic Explosion, Institute for Chemical Physics, Academy of Sciences, USSR, Journal of Experimental and Theoretical Physics (USSR), English translation in volume 35, 1538-1544 (December
1958); Original article in Russian in JETP, 8, 1076-1080 (1954). ]

The first implosion atomic bomb (Fat Man) was known as the Christy Gadget:


... the Los Alamos team discovered that the interface between the detonating explosives and the hollow sphere could become unstable and ruin the crushing power of the blast wave.

Dr. Christy, while studying implosion tests, realized that a solid core could be compressed far more uniformly, and he worked hard in the days that followed to convince his colleagues of its superiority. He succeeded, and the hollow core was replaced with one made of solid plutonium metal.

... Robert Frederick Christy was born May 14, 1916, in Vancouver and studied physics at the University of British Columbia. He was a graduate student at the University of California, Berkeley, under J. Robert Oppenheimer, a leading theoretical physicist who became known as the father of the atomic bomb.

After completing his studies in 1941, Dr. Christy worked at the University of Chicago before being recruited to join the Los Alamos team when Oppenheimer became its scientific director.

After the war, Dr. Christy joined Caltech in theoretical physics and stayed at the university for the rest of his academic career, serving as a faculty chairman, vice president, provost (from 1970 to 1980) and acting president (1977-78). He was elected to the National Academy of Sciences.