The Economist on Polygenic Risk Scores and Embryo Selection 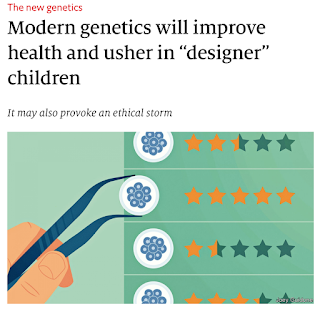 The graph at bottom says it all.

What is it worth to know that you, or your child, or your embryo, are in the top or bottom risk group for a broad array of common diseases?


Economist: Sometime next year, if all goes to plan, a gay male couple in California will have a child. The child in question will have been conceived by in vitro fertilisation. In this case a group of eggs from a female donor are now being fertilised by sperm from both fathers (half from one, half from the other). Of the resulting embryos, the couple will choose one to be implanted in a surrogate mother. An uplifting tale of the times, then, but hardly a newsworthy event. Except that it is.

Where the story becomes newsworthy is around the word “choose”. For the parents, in conjunction with a firm called Genomic Prediction, will pick the lucky embryo based on a genetically estimated risk of disease. Such pre-implantation testing is already used in some places, in cases where there is a chance of parents passing on a condition, such as Tay-Sachs disease, that is caused by a single faulty gene. Genomic Prediction is, however, offering something more wide-ranging. It is screening embryos for almost 1m single-nucleotide polymorphisms (snps). These are places where individual genomes routinely differ from one another at the level of an individual genetic letter. Individual snp differences between people rarely have much effect. But add them up and they can raise or lower by quite a lot the likelihood of someone suffering a particular disease. Generate several embryos and snp-test them, then, and you can pick out those that you think will grow up to be the healthiest. ...

Economist podcast interview with the author of the article, who is also working on a book about John von Neumann! 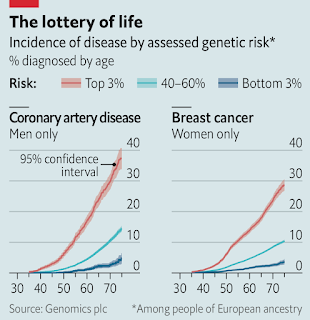