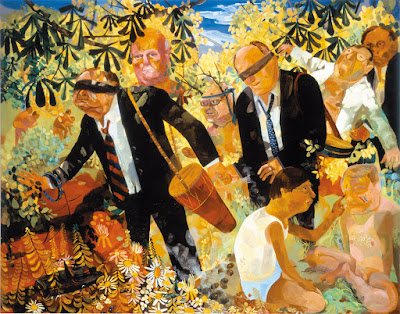 From the NY Review of Books, an article entitled Against Economics, which reviews the recent book by Robert Skidelsky.


Money and Government: The Past and Future of Economics

... Before long, the Bank of England (the British equivalent of the Federal Reserve, whose economists are most free to speak their minds since they are not formally part of the government) rolled out an elaborate official report called “Money Creation in the Modern Economy,” replete with videos and animations, making the same point: existing economics textbooks, and particularly the reigning monetarist orthodoxy, are wrong. The heterodox economists are right. Private banks create money. Central banks like the Bank of England create money as well, but monetarists are entirely wrong to insist that their proper function is to control the money supply. In fact, central banks do not in any sense control the money supply; their main function is to set the interest rate—to determine how much private banks can charge for the money they create. Almost all public debate on these subjects is therefore based on false premises. For example, if what the Bank of England was saying were true, government borrowing didn’t divert funds from the private sector; it created entirely new money that had not existed before.

[[ Certainly central banks influence the money supply, but the degree to which they control animal spirits, lending practices and standards, the price of credit risk in general, etc. via a single part of the yield curve is highly debatable, dependent on many factors such as investor psychology and recent events, etc. etc.  There is no doubt this is a complex question worthy of deep analysis ...

... one of the most significant books to come out of the UK in recent years would have to be Robert Skidelsky’s Money and Government: The Past and Future of Economics. Ostensibly an attempt to answer the question of why mainstream economics rendered itself so useless in the years immediately before and after the crisis of 2008, it is really an attempt to retell the history of the economic discipline through a consideration of the two things—money and government—that most economists least like to talk about.

On the question of whether academic economists understand how the world works, I'll just reiterate that at the time of the last financial crisis (circa 2007-2008) I became aware through direct experience that many very prominent economists did not know what a Credit Default Swap was, did not know how the credit markets actually worked, did not know how credit risk was priced. Instead, their mental model consisted of coarse graining over all of this activity (quants, traders, mobs, speculators, thieves, fraudsters) as simply a (more or less) rational and efficient market not worthy of deep inspection.

They will all deny it now, of course. But I was there.


Note added: In the 1990s, in part due to the collapse of the Soviet empire and resulting mass emigration of top scientists to the West, there were very few opportunities in theoretical physics and related fields for young researchers. Consequently large numbers of extremely talented people left the field (largely against their will) and perhaps most of them ended up in finance. As might be expected a large number of big brains began thinking about previously obscure topics such as options pricing (derivatives, Black Scholes), credit risk, the yield curve, etc. Immediately it was noted, by myself and others, that methods from imaginary time quantum mechanics, path integrals, etc., could be applied to the pricing of derivatives -- especially exotic derivatives which had, up to that time, required significant computational resources to simulate.

The yield curve and credit derivatives are especially challenging problems. One reason is that they deal with a potentially infinite (if a continuous curve is assumed) number of degrees of freedom. As one of my former Caltech-Harvard collaborators (by the 1990s a quant-trader, now a hedge fund magnate) described it, modeling the yield curve compared to pricing equity derivatives is like quantum field theory compared to simple quantum mechanics.

In modeling the yield curve one immediately asks: what are the underlying dynamics? What are reasonable consistency conditions? What is the impact of a "shock" like a change in the Fed funds rate? A moment of reflection reveals that market psychology plays a huge role in setting the model parameters... A bit of historical investigation shows radical changes in the yield curve (and, consequently, the effective "money supply") over time. One can in effect create money out of thin air!
Posted by Steve Hsu at 9:01 AM