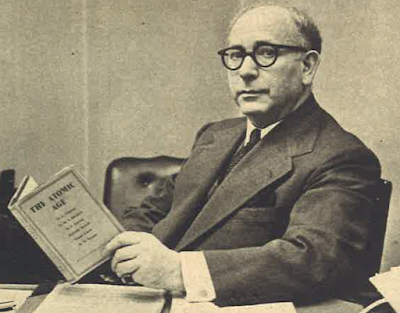 Last month I received an astonishing email, partly excerpted below.

By way of introduction, my grandfather, General Groves, led the Manhattan Project. I’m now working on a documentary series about the making of the bomb.

I first came across Robert Jungk’s account of the Sachs-FDR meetings not in Jungk's book, but in your “Contingency, History, and the Atomic Bomb” posting online. Thank you.

It’s an important episode that appears in almost none of the histories, Rhodes’ Making of the Atomic Bomb included. And it’s relevant: anyone who has had to pitch a complicated idea or project knows that getting the initial approval and funding can be more challenging than completing the work proposed.

I’ve since found quite a bit of material pertaining to the story. I thought you might find it interesting.

I imagine some graduate history, science, or economics student could turn this into a PhD thesis. (Why did FDR always have time for Sachs? I see some hints that Sachs may have been ahead of his time in macroeconomics.) Or – Szilard and Wigner’s efforts to get the matter in front of FDR could be a management case study.

Anyway, thank you for posting the story. The full version will definitely make it into my production.

From Contingency, History, and the Atomic Bomb (excerpt from Jungk):


How Alexander Sachs, acting on behalf of Szilard and Einstein, narrowly convinced FDR to initiate the atomic bomb project. History sometimes hangs on a fragile thread: had the project been delayed a year, atomic weapons might not have been used in WWII. Had the project completed a year earlier, the bombs might have been used against Germany.


... It was nearly ten weeks before Alexander Sachs at last found an opportunity, on October 11, 1939, to hand President Roosevelt, in person, the letter composed by [Leo] Szilard and signed by [Albert] Einstein at the beginning of August [1939]. In order to ensure that the President should thoroughly appreciate the contents of the document and not lay it aside with a heap of other papers awaiting attention, Sachs read to him, in addition to the message and an appended memorandum by Szilard, a further much more comprehensive statement by himself. The effect of these communications was by no means so overpowering as Sachs had expected. Roosevelt, wearied by the prolonged effort of listening to his visitor, made an attempt to disengage himself from the whole affair. ...

Sachs, however, was able, as he took his leave, to extort from the President the consolation of an invitation to breakfast the following morning. "That night I didn't sleep a wink," Sachs remembers.

[ The next morning, at the White House ]

After Sachs finished speaking the President remained silent for several minutes. Then he wrote something on a scrap of paper and handed it to the servant who had been waiting at table. The latter soon returned with a parcel which, at Roosevelt's order, he began slowly to unwrap. It contained a bottle of old French brandy of Napoleon's time, which the Roosevelt family had possessed for many years. The President, still maintaining a significant silence, told the man to fill two glasses. Then he raised his own, nodded to Sachs and drank to him.

Next he remarked: "Alex, what you are after is to see that the Nazis don't blow us up?"

It was only then that Roosevelt called in his attaché, [Brigadier] General [Edwin] "Pa" Watson, and addressed him—pointing to the documents Sachs had brought—in words which have since become famous:

Sachs was a trusted but largely anonymous advisor to Roosevelt. He advised Roosevelt through the Great Depression and foresaw the rise of Hitler and the military threat from Germany. From the profile in Look Magazine:


... only one word describes him: genius. A story about how he helped President Roosevelt to understand the atomic energy problem in 1939 throws light on why Dr. Sachs is so described. ...

... Schooled at Columbia and Harvard, he never left the school of self-education.

Dr. Alexander Sachs' career has been in economics, with a special emphasis on the mathematics of statistics. But the range of his intellectual interests embraces religion, science, history, and politics. ...