Now that we have neural nets that are good at certain narrow tasks, such as image or speech recognition, playing specific games, translating language, ... the next stage of development will involve 1. linking these specialized nets together in a more general architecture ("Mixtures of Experts"), and 2. generalizing what is learned in one class of problems to different situations ("transfer learning"). The first paper below is by Google Brain researchers and the second from Google DeepMind.

The capacity of a neural network to absorb information is limited by its number of parameters. Conditional computation, where parts of the network are active on a per-example basis, has been proposed in theory as a way of dramatically increasing model capacity without a proportional increase in computation. In practice, however, there are significant algorithmic and performance challenges. In this work, we address these challenges and finally realize the promise of conditional computation, achieving greater than 1000x improvements in model capacity with only minor losses in computational efficiency on modern GPU clusters. We introduce a Sparsely-Gated Mixture-of-Experts layer (MoE), consisting of up to thousands of feed-forward sub-networks. A trainable gating network determines a sparse combination of these experts to use for each example. We apply the MoE to the tasks of language modeling and machine translation, where model capacity is critical for absorbing the vast quantities of knowledge available in the training corpora. We present model architectures in which a MoE with up to 137 billion parameters is applied convolutionally between stacked LSTM layers. On large language modeling and machine translation benchmarks, these models achieve significantly better results than state-of-the-art at lower computational cost.

For artificial general intelligence (AGI) it would be efficient if multiple users trained the same giant neural network, permitting parameter reuse, without catastrophic forgetting. PathNet is a first step in this direction. It is a neural network algorithm that uses agents embedded in the neural network whose task is to discover which parts of the network to re-use for new tasks. Agents are pathways (views) through the network which determine the subset of parameters that are used and updated by the forwards and backwards passes of the backpropogation algorithm. During learning, a tournament selection genetic algorithm is used to select pathways through the neural network for replication and mutation. Pathway fitness is the performance of that pathway measured according to a cost function. We demonstrate successful transfer learning; fixing the parameters along a path learned on task A and re-evolving a new population of paths for task B, allows task B to be learned faster than it could be learned from scratch or after fine-tuning. Paths evolved on task B re-use parts of the optimal path evolved on task A. Positive transfer was demonstrated for binary MNIST, CIFAR, and SVHN supervised learning classification tasks, and a set of Atari and Labyrinth reinforcement learning tasks, suggesting PathNets have general applicability for neural network training. Finally, PathNet also significantly improves the robustness to hyperparameter choices of a parallel asynchronous reinforcement learning algorithm (A3C).

The figure below describes the speedup in learning new games based on previous learning from playing a game of different type. 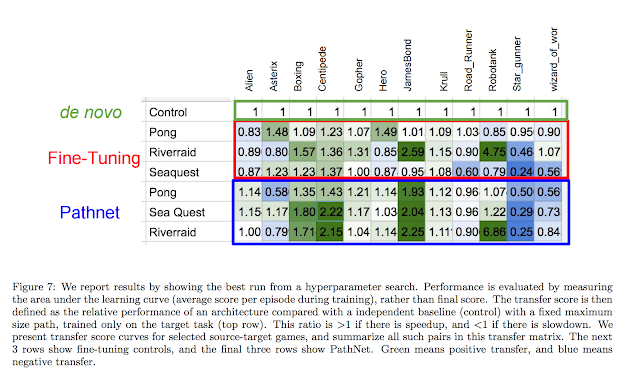