In the future there will be two kinds of jobs. Workers will either

Tell computers what to do

Be told by computers what to do 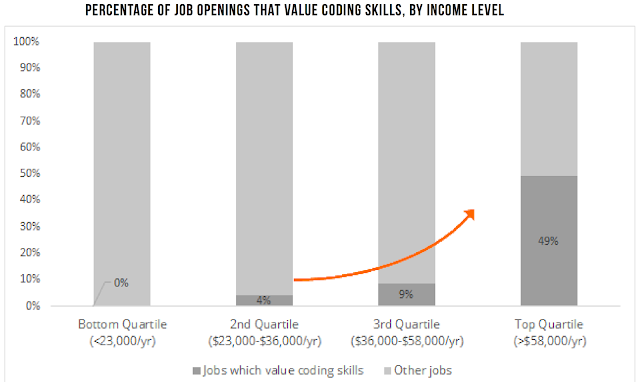 See this jobs report, based on BLS statistics and analysis of 26 million job postings scraped from job boards, newspapers, and other online sources in 2015.


Coding jobs represent a large and growing part of the job market. There were nearly 7 million job openings in the U.S. last year for roles requiring coding skills. This represents 20% of the total market for career-track jobs that pay $15 an hour or more. Jobs with coding skills are projected to grow 12% faster than the job market overall in the next 10 years. IT jobs are expected to grow even more rapidly: 25% faster than the overall market.1

Programming skills are in demand across a range of industries. Half of all programming openings are in Finance, Manufacturing, Health Care, and other sectors outside of the technology industry.

Jobs valuing coding skills pay $22,000 per year more, on average, than jobs that don’t: $84,000 vs $62,000 per year. The value of these skills is striking and, for students looking to increase their potential income, few other skills open the door to as many well-paying careers. Slicing the data another way, 49% of the jobs in the top wage quartile (>$58,000/yr) value coding skills.

We define coding jobs as those in any occupation where knowing how to write computer code makes someone a stronger candidate and where employers commonly request coding skills in job postings. In some cases, coding is a prerequisite skill for the role, such as for Database Administrators. In other cases, such as Graphic Designers, knowing how to code may not be required in all cases, but job seekers with relevant programming skills will typically have an advantage.

See also The Butlerian Jihad and Darwin among the Machines.
Posted by Steve Hsu at 8:44 AM