The cult of genius? 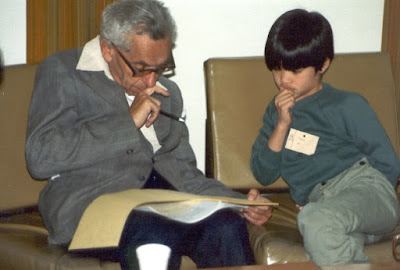 In one of his early blog posts, Terence Tao (shown above with Paul Erdos in 1985) wrote


Does one have to be a genius to do maths? The answer is an emphatic NO. In order to make good and useful contributions to mathematics, one does need to work hard, learn one’s field well, learn other fields and tools, ask questions, talk to other mathematicians, and think about the “big picture”. And yes, a reasonable amount of intelligence, patience, and maturity is also required. But one does not need some sort of magic “genius gene” that spontaneously generates ex nihilo deep insights, unexpected solutions to problems, or other supernatural abilities.

The popular image of the lone (and possibly slightly mad) genius – who ignores the literature and other conventional wisdom and manages by some inexplicable inspiration (enhanced, perhaps, with a liberal dash of suffering) to come up with a breathtakingly original solution to a problem that confounded all the experts – is a charming and romantic image, but also a wildly inaccurate one, at least in the world of modern mathematics. We do have spectacular, deep and remarkable results and insights in this subject, of course, but they are the hard-won and cumulative achievement of years, decades, or even centuries of steady work and progress of many good and great mathematicians; the advance from one stage of understanding to the next can be highly non-trivial, and sometimes rather unexpected, but still builds upon the foundation of earlier work rather than starting totally anew. (This is for instance the case with Wiles‘ work on Fermat’s last theorem, or Perelman‘s work on the Poincaré conjecture.)

Actually, I find the reality of mathematical research today – in which progress is obtained naturally and cumulatively as a consequence of hard work, directed by intuition, literature, and a bit of luck – to be far more satisfying than the romantic image that I had as a student of mathematics being advanced primarily by the mystic inspirations of some rare breed of “geniuses”. This “cult of genius” in fact causes a number of problems, since nobody is able to produce these (very rare) inspirations on anything approaching a regular basis, and with reliably consistent correctness. (If someone affects to do so, I advise you to be very sceptical of their claims.) The pressure to try to behave in this impossible manner can cause some to become overly obsessed with “big problems” or “big theories”, others to lose any healthy scepticism in their own work or in their tools, and yet others still to become too discouraged to continue working in mathematics. Also, attributing success to innate talent (which is beyond one’s control) rather than effort, planning, and education (which are within one’s control) can lead to some other problems as well.

These are insightful comments, and deserve to be taken very seriously, coming as they do from the one of the youngest Fields Medalists in history and a legendary child prodigy.

But many readers misinterpreted Tao's remarks as minimizing the impact of native ability on success in research. Recently, Tao corrected this impression in the comment thread to his original post.

It appears my previous comment may have have been interpreted in a manner differently from what I intended, which was as a statement of (lack of) empirical correlation rather than (lack of) causation. More precisely, the point I was trying to make with the above quote is this: if one considers a population of promising young mathematicians (e.g. an incoming PhD class at an elite mathematics department), they will almost all certainly have some reasonable level of intelligence, and some subset will have particularly exceptional levels of intelligence. A significant fraction of both groups will go on to become professional mathematicians of some decent level of accomplishment, with the fraction likely to (but not necessarily) be a bit higher when restricted to the group with exceptional intelligence. But if one were to try to use “exceptional levels of intelligence” as a predictor as to which members of the population will go on to become exceptionally successful and productive mathematicians, I believe this to be an extremely poor predictor, with the empirical correlation being low or even negative (cf. Berkson’s paradox).

Now, at the level of theoretical causation rather than empirical correlation, I would concede that if one were to take a given mathematician and somehow increase his or her level of intelligence to extraordinary levels, while keeping all other traits (e.g. maturity, work ethic, study habits, persistence, level of rigor and organisation, breadth and retention of knowledge, social skills, etc.) unchanged, then this would likely have a positive effect on his or her ability to be an extraordinarily productive mathematician. However, empirically one finds that mathematicians who did not exhibit precocious levels of intelligence in their youth are likely to be stronger in other areas which will often turn out to be more decisive in the long-term, at least when one restricts to populations that have already reached some level of mathematical achievement (e.g. admission to a top maths PhD program).

For instance, many difficult problems in mathematics require a slow, patient approach in which one methodically digests all the existing techniques in the literature and applies various combinations of them in turn to the problem, until one gets a deep enough understanding of the situation that one can isolate the key obstruction that needs to be overcome and the key new insight which, in conjunction with an appropriate combination of existing methods, will resolve the problem. A mathematician who is used to using his or her high levels of intelligence to quickly find original solutions to problems may not have the patience and stamina for such a systematic approach, and may instead inefficiently expend a lot of energy on coming up with creative but inappropriate approaches to the problem, without the benefit of being guided by the accumulated conventional wisdom gained from fully understanding prior approaches to the problem. Of course, the converse situation can also occur, in which an unusually intelligent mathematician comes up with a viable approach missed by all the more methodical people working on the problem, but in my experience this scenario is rarer than is sometimes assumed by outside observers, though it certainly can make for a more interesting story to tell.

1. Individuals accepted into elite PhD programs in mathematics are already highly selected. I would guess, based on my familiarity with test scores of applicants to similar programs in theoretical physics, that a typical person in this population is well beyond +3 SD in overall cognitive (or at least mathematical) ability, which means fewer than one in a thousand in the general population. Tao doesn't say what he thinks the chances are for someone who has significantly less ability than this; I would say their chances at a research career in math are poor. Individuals with what Tao refers to as “exceptional levels of intelligence” would be at least +4 SD or more, making them fewer than one in ten thousand in the general population, or even much more rare. (To be totally frank I think a large fraction of good mathematicians are +4 SD and Tao is really talking about people who are exceptional even relative to them.)

2. Tao describes a schematic model with several quasi-independent input factors (raw cognitive ability, work ethic, maturity, breadth of knowledge, etc.) contributing to success. This is my working model as well. The claim that within the population of PhD students at top departments there might be only small or even negative correlation between factors such as raw ability and work ethic also seems plausible to me given a minimum threshold of undergraduate achievement (which can be obtained using various combinations of the individual factors) necessary for admission. 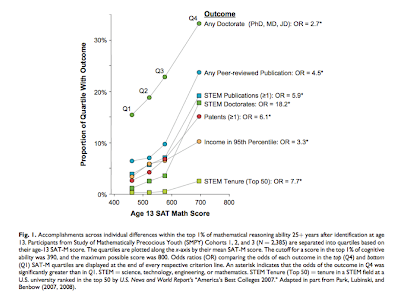 4. Should young people be made aware of the brute facts presented above? It seems terrible to limit one's ambitions based on some crudely measured construct like general cognitive ability or math ability. On the other hand, we do this all the time. When was the right time in my life to wise up about the fact that I would probably never make it to the NFL? After playing linebacker at 200 lbs for Division III Caltech (which doesn't even have a football team now), I was considering walking on at UC Berkeley as a 19 year old grad student. Should I have clung to my dream, or wised up about my dim future in Division I sports? :-)

5. Related to Tao's last remark the converse situation can also occur, in which an unusually intelligent mathematician comes up with a viable approach missed by all the more methodical people, see Sidney Coleman on Feynman:


"I think if he had not been so quick people would have treated him as a brilliant quasi crank, because he did spend a substantial amount of time going down what later turned out to be dead ends," said Sidney Coleman, a theorist who first knew Feynman at Caltech in the 50's.

"There are lots of people who are too original for their own good, and had Feynman not been as smart as he was, I think he would have been too original for his own good," Coleman continued. "There was always an element of showboating in his character. He was like the guy that climbs Mont Blanc barefoot just to show that it can be done."

Feynman continued to refuse to read the current literature, and he chided graduate students who would begin their work on a problem in the normal way, by checking what had already been done. That way, he told them, they would give up chances to find something original.

"I suspect that Einstein had some of the same character," Coleman said. "I'm sure Dick thought of that as a virtue, as noble. I don't think it's so. I think it's kidding yourself. Those other guys are not all a collection of yo-yos. Sometimes it would be better to take the recent machinery they have built and not try to rebuild it, like reinventing the wheel. Dick could get away with a lot because he was so goddamn smart. He really could climb Mont Blanc barefoot."

Success, Ability and All That

Bezos on the Big Brains

What is the difference?