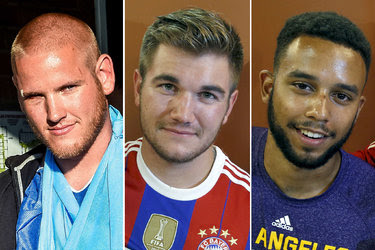 Spencer Stone (left) is a blue belt at Gracie Lisboa. He choked out the terrorist gunman on the Amsterdam-Paris train yesterday.


NYTimes: ... Alek Skarlatos, a specialist in the National Guard from Oregon vacationing in Europe with a friend in the Air Force, Airman First Class Spencer Stone and another American, Anthony Sadler, looked up and saw the gunman. Mr. Skarlatos, who was returning from a deployment in Afghanistan, looked over at the powerfully built Mr. Stone, a martial arts enthusiast. “Let’s go, go!” he shouted.

... In the train carriage, Mr. Stone was the first to act, jumping up at the command of Mr. Skarlatos. He sprinted through the carriage toward the gunman, running “a good 10 meters to get to the guy,” Mr. Skarlatos said. Mr. Stone was unarmed; his target was visibly bristling with weapons.

With Mr. Skarlatos close behind, Mr. Stone grabbed the gunman’s neck, stunning him. But the gunman fought back furiously, slashing with his blade, slicing Mr. Stone in the neck and hand and nearly severing his thumb. Mr. Stone did not let go.

The gunman “pulled out a cutter, started cutting Spencer,” Mr. Norman, the British consultant, told television interviewers. “He cut Spencer behind the neck. He nearly cut his thumb off.”

... Mr. Stone, wounded and bleeding, kept the suspect in a chokehold. “Spencer Stone is a very strong guy,” Mr. Norman said. The suspect passed out.