These results suggest a model for individual variation in brain function and cognitive ability driven by the number of disruptive mutations ("nicks" affecting key functions such as those listed below). Some of these variants are relatively common in the population (e.g., have frequency of at least a few percent), others are very rare (e.g., 1 in 10,000 in the population). See also Deleterious variants affecting traits that have been under selection are rare and of small effect.


A polygenic burden of rare disruptive mutations in schizophrenia
doi:10.1038/nature12975

Schizophrenia is a common disease with a complex aetiology, probably involving multiple and heterogeneous genetic factors. Here, by analysing the exome sequences of 2,536 schizophrenia cases and 2,543 controls, we demonstrate a polygenic burden primarily arising from rare (less than 1 in 10,000), disruptive mutations distributed across many genes. Particularly enriched gene sets include the voltage-gated calcium ion channel and the signalling complex formed by the activity-regulated cytoskeleton-associated scaffold protein (ARC) of the postsynaptic density, sets previously implicated by genome-wide association and copy-number variation studies. Similar to reports in autism, targets of the fragile X mental retardation protein (FMRP, product of FMR1) are enriched for case mutations. No individual gene-based test achieves significance after correction for multiple testing and we do not detect any alleles of moderately low frequency (approximately 0.5 to 1 per cent) and moderately large effect. Taken together, these data suggest that population-based exome sequencing can discover risk alleles and complements established gene-mapping paradigms in neuropsychiatric disease. 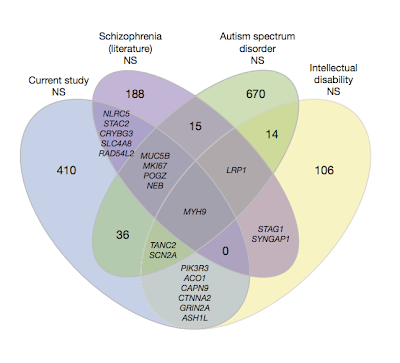 Newbie question: can anyone explain what "enriched" means in the context of gene sets or targets of a protein? (Or for that matter, what a target of a protein is?)

Mapping out more genetic correlations will give us better definitions of phenotype. A lot of our definitions of different psychiatric disorders are rather arbitrary, and genetic clustering may help to sort out the major clusterings of traits.

"enriched" = enriched for mutations. The frequency of mutation in these gene sets was higher in the schizo group than the normal group.

Couldn't you argue that schizophrenia is an intellectual disability? You're misperceiving reality, misprocessing information, and you're cognitively dysfunctional and maladaptive. What exactly is the difference between stupidity and insanity and is it analogous to the difference between intelligence and creativity?

The "Disruptive Mutations" would be a pretty good band name.

Contrary to the Nature paper linked to above, a CNV study in the January issue of Intelligence found no association between CNV numbers and IQ ("Low-frequency copy-number variants and general cognitive ability: No evidence of association"). Since it took 180 000 people to find a handful variants associated with height and this one only used 6000, I don't think we can say anything with confidence yet. Especially since what we presumably are looking for in these studies are very rare variants.


Unlike the Nature paper, they focused on general CNVs. The Stefannson paper restricted themselves to those that affect schizophrenia risk, so it wouldn't be strange if it were easier to find ones that affected other aspects of cognition.

"If, as hypothesized, neuroactive peptides from grain glutens are the
major agents evoking schizophrenia in those with the genotype(s), it
should be rare if grain is rare...

and so as Communism had its homo sovieticus, the pseudoscience of behavioral genetics has its homo geneticus.