2017 Update: the Pew report has moved; old links below are broken.

A commenter points me to the Pew Trust study on US economic mobility. I excerpt some interesting figures from the report below, but it is worth reading in full. Much of the data comes from NLSY. Note that mobility data over quintiles does not address the increasing concentration of wealth at the top: see US wealth inequality and Inside the 1%.

Americans born in middle income quintile families have roughly equal probability of ending up in any of the other quintiles. Being born in a top quintile family is far from a guarantee of persistence in the top quintile, and similarly for the bottom quintile. 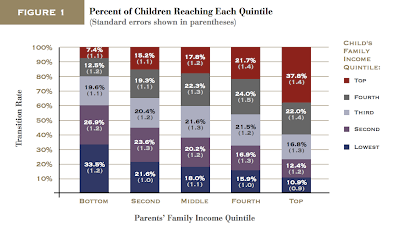 White men have slightly more upward mobilility than other groups. 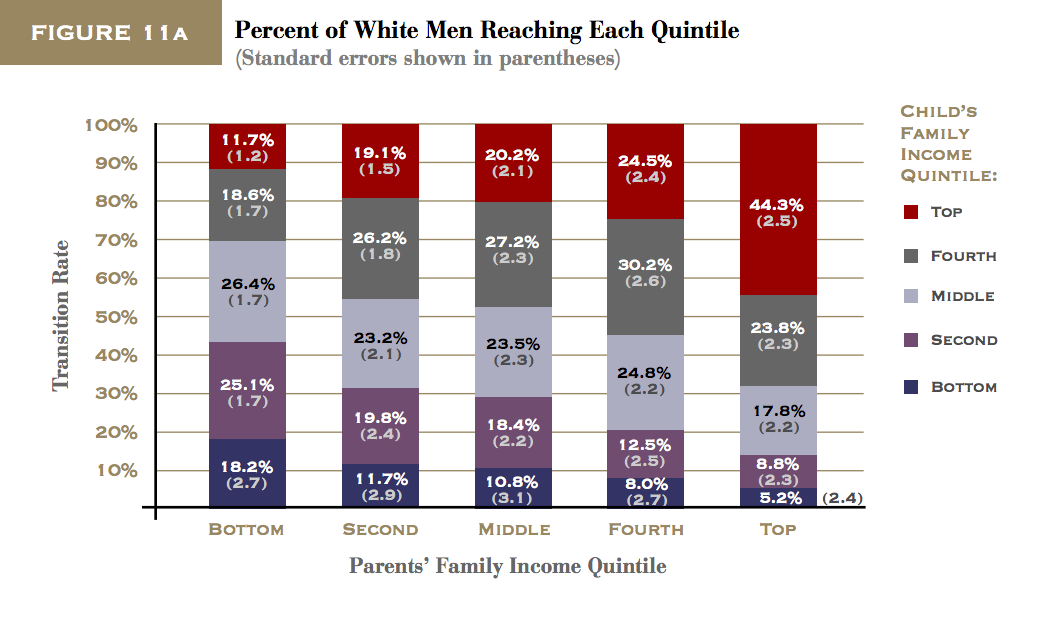 The outcome distribution for top quintile (family background) black men is most similar to that for median quintile white men. 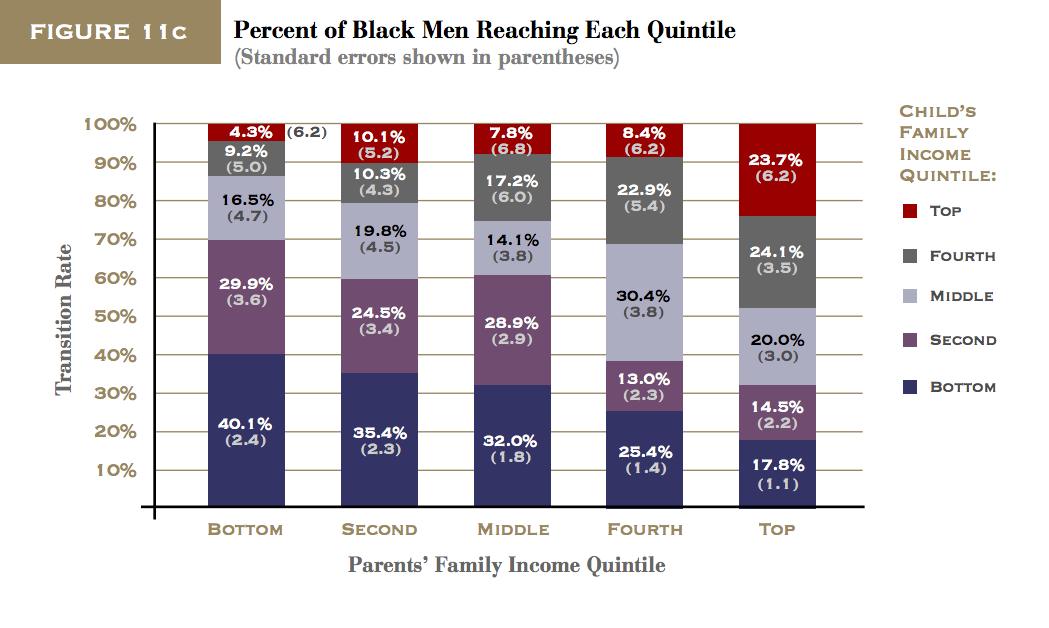 Superior cognitive ability is strongly indicative of upward mobility from the lowest quintile. This is true for both blacks and whites. Individuals who are cognitively at the median in the overall population have an 80% chance of moving up and out of the bottom quintile. 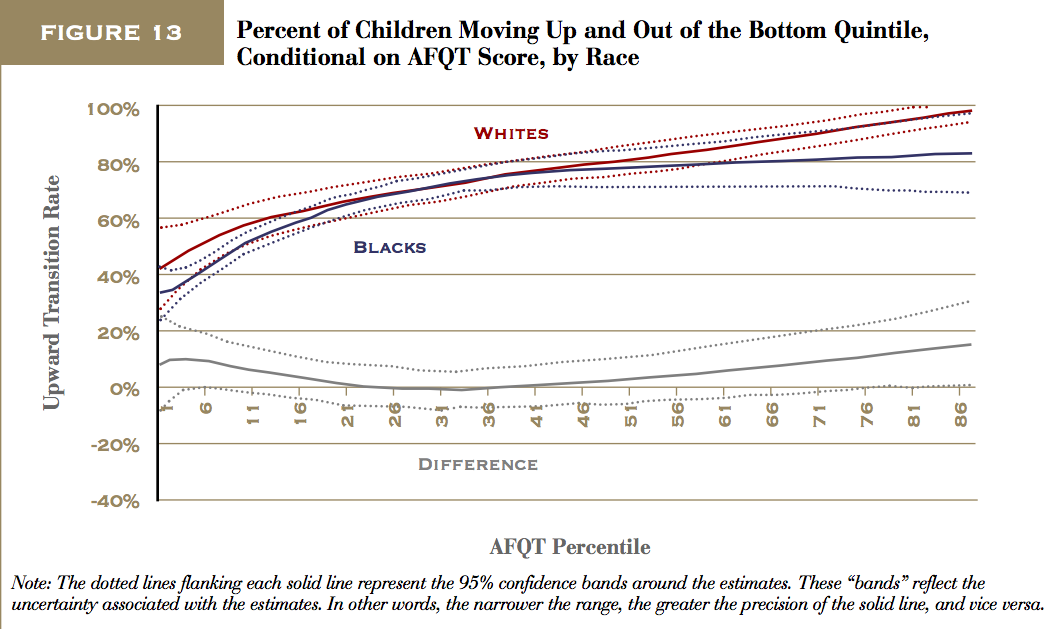 Pew: Individuals with higher test scores in adolescence are more likely to move out of the bottom quintile, and test scores can explain virtually the entire black-white mobility gap. Figure 13 plots the transition rates against percentiles of the AFQT test score distribution. The upward-sloping lines indicate that, as might be expected, individuals with higher test scores are much more likely to leave the bottom income quintile. For example, for whites, moving from the first percentile of the AFQT distribution to the median roughly doubles the likelihood from 42 percent to 81 percent. The comparable increase for blacks is even more dramatic, rising from 33 percent to 78 percent. Perhaps the most stunning finding is that once one accounts for the AFQT score, the entire racial gap in mobility is eliminated for a broad portion of the distribution. At the very bottom and in the top half of the distribution a small gap remains, but it is not statistically significant. The differences in the top half of the AFQT distribution are particularly misleading because there are very few blacks in the NLSY with AFQT scores this high.

What makes the AFQT observation even more compelling to me is all the non-explanations for the black-white mobility gap that follow it. For example, immediately following is: "The more years of schooling both black and white children attain, the more likely they are to move up and out of the bottom quintile. However, years of completed schooling explains little of the black and white economic mobility gap."

I wish the author gave some idea of how many of the respondents had AFQT data and if there were biases apparent in who did (e.g. I wonder how availability of AFQT results varied with parents income percentile). After digging into this a little more I have the impression they may have fairly complete (>90%) AFQT data for their respondents. See https://www.nlsinfo.org/content/cohorts/nlsy79/topical-guide/education/aptitude-achievement-intelligence-scores

I am guessing that average us household income per household per year correlates with average cognitive ability. This must explain why Indian americans are the richest with an average indian american(from india) household making ~$87000 a year. This must by why india has a space program with 900 million on less than $5 a day. Those at the top of the caste system have the highest IQ's on earth. After that comes jews then east asians followed by whites then hispanics(similar to working class whites) and then blacks. It seems to me that the great divergence is due to the idea of human equality and the industrial revolution. China is regaining it's foothold but india needs to re adopt the caste system if it wishes to as well.

Forgive spelling informalities. I have written it on a phone browser.

"What does that say about those that remain in the bottom quintile?"


steve tittered as he wrote this. why don't you say what it says herr professor doktor doktor hsu?


"Individuals with higher test scores in adolescence are more likely to
move out of the bottom quintile, and test scores can explain virtually
the entire black-white mobility gap."

apparently herr professor doktor doktor hsu agrees that les etats unis merdeux is more meritocratic than dk. he doesn't remember how pathetically not-heritable iq is for those in the bottom quintile.


it is fascinating how the model minority despite voting dem emulates rednecks.

i don't understand how this is compelling AT ALL.

it's been known forever that people with low iqs are poor and vice versa and that the iq income correlation almost vanishes for those with iqs above 100.

it's also known that in the us poor folks' iq is not heritable.

***so...what??? ***
So insitutional discrimination, structural discrimination, group privilege [insert other sociological theory] might not be as rife in the employment marketplace as some fear?
If there were massive differences in economic mobility after accounting for test scores then that would suggest anti-discrimination laws are ineffective.

this you conclude from the probability of moving out of the bottom quintile vs iq chart?

anyway, the "some" of "institutional ...some fear" DO NOT EXIST. but it has been shown that those with recognizably black names are discriminated against sight unseen.

you did notice that this is afqt data. what fraction were taken out of the bottom quintile because they scored so high. that is, who takes the afqt who doesn't join the military, and who scores high and is not recruited for an above poverty wage?

Hey, at 17 I scored way high on the AFQT and the Marine Corps didn't commission me, they put me to work sweeping for mines and getting rid of booby traps!

I made the same (apparently incorrect) assumption about the AFQT data implying association with the military before investigating. If you follow the link I gave in my first comment it appears they administered the AFQT to the NLSY participants (well, actually the ASVAB) as part of establishing norms for that test.

Regarding the IQ vs. sociological explanations, I don't doubt they both have some impact, but I think that chart is a compelling argument against the idea that the black-white achievement gap is solely due to discrimination. I'm with @botti regarding the sociological theory comment, but disagree with "...anti-discrimination laws are ineffective" (that is arguable and we would need data pre/post current laws to say much IMHO) and would instead suggest "additional anti-discrimination laws probably won't close the remaining gap."

that the iq income correlation almost vanishes for those with iqs above 100.

According to what data? See this study, for example. The relation seems pretty linear across the IQ range for blacks and whites, but blacks benefit more from above-average IQ than whites.

so a degree was required then too? but you were lifted above the 20th percentile in wages?

There were so called "mustangs" in The Corps who were promoted from the ranks but they were generally superior Staff Sergeants in their late 20's or infantryman who received battlefield commissions right on the spot.
As always, the ne plus ultra for Marine Officers was and is a degree from the Naval Academy.

The wages I received during my working career were determined most of all by my competence and secondarily (more like a help in getting my foot in the door) by my B.A from Cal.