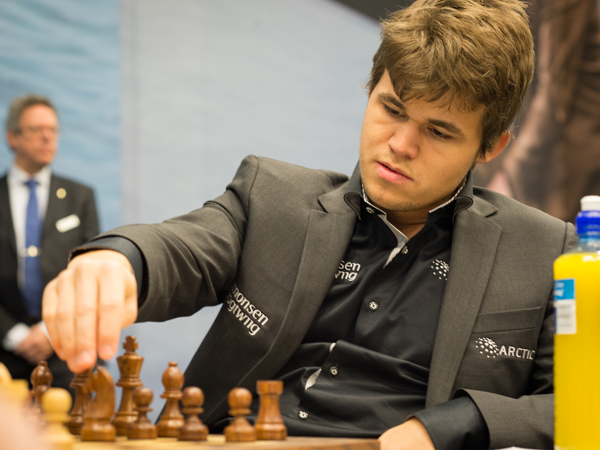 I am curious about what serious chess players think of Elo scores across generations -- is there a Flynn Effect? Current world champ Magnus Carlsen has the highest score of all time. It seems possible that due to computer training today's players are much better than those of the past -- we'll never know how giants like Bobby Fischer would have developed using today's methods. By Elo score Fischer is only 14th on the all-time list!

I thought interest in chess would decline after Deep Blue defeated Kasparov. But apparently the game is still thriving.

The excerpts below are from an old interview in Der Spiegel:


Carlsen: ... my success mainly has to do with the fact that I had the opportunity to learn more, more quickly. It has become easier to get hold of information. The players from the Soviet Union used to be at a huge advantage; in Moscow they had access to vast archives, with countless games carefully recorded on index cards. Nowadays anyone can buy this data on DVD for 150 euros; one disk holds 4.5 million games. There are also more books than there used to be. And then of course I started working with a computer earlier than Vladimir Kramnik or Viswanathan Anand.

Carlsen: I was eleven or twelve. I used the computer to prepare for tournaments, and I played on the Internet. Nowadays, children start using a computer at an even earlier age; they are already learning the rules on screen. In that sense I am already old-fashioned. Technological progress leads to younger and younger top players, everywhere in the world.

SPIEGEL: Is being young an advantage in modern chess?

Carlsen: As a young player you have a lot of energy, a lot of strength, you are very motivated. But young players are often not good at defending a position; they cannot cope well when fate turns against them. The fact is simply that experience is a central issue. One of the most important things in chess is pattern recognition: the ability to recognise typical themes and images on the board, characteristics of a position and their consequences. To a certain degree you can learn that while training, but there is nothing like playing routine. I have always made sure to get that. I am only 19, but I have certainly already played a thousand games in the classic style.

This is also interesting:


SPIEGEL: Mr Carlsen, what is your IQ?

Carlsen: I have no idea. I wouldn’t want to know it anyway. It might turn out to be a nasty surprise.

SPIEGEL: Why? You are 19 years old and ranked the number one chess player in the world. You must be incredibly clever.

Carlsen: And that’s precisely what would be terrible. Of course it is important for a chess player to be able to concentrate well, but being too intelligent can also be a burden. It can get in your way. I am convinced that the reason the Englishman John Nunn never became world champion is that he is too clever for that.

Carlsen: At the age of 15, Nunn started studying mathematics in Oxford; he was the youngest student in the last 500 years, and at 23 he did a PhD in algebraic topology. He has so incredibly much in his head. Simply too much. His enormous powers of understanding and his constant thirst for knowledge distracted him from chess.

SPIEGEL: Things are different in your case?

Carlsen: Right. I am a totally normal guy. My father is considerably more intelligent than I am.

Der Spiegel carefully tested Kasparov's IQ at 135, as discussed here. See also The Laskers and the Go master.
Posted by Steve Hsu at 9:15 AM

Not so much a Flynn effect, but ratings in the ELO system will tend to increase over time simply due to the number of games played. So there is inflation. That said, today's top players are stronger than yesterday's, due to superior computer prep.

Here he plays 10 players at the same time while blindfolded: http://www.cbsnews.com/videos/mozart-of-chess-magnus-carlsen/

The general feeling among serious players is that there has been rating inflation on the international level over the last 30 years or so. For example, sometimes older players have achieved their all-time peak rating while clearly past their primes. This last year, Boris Gelfand has achieved his highest career rating in his mid-40s. (Boris had been super-hot stuff back in the early 1990s, winning two Interzonals back in 1990 and 1993, among other things.) OTOH, Boris has been playing great chess over the last two years, so this may well BE his prime!

Victor Korchnoi was another example of this, achieving a higher rating in July of 1999 than he had in January of 1978. (In 1978 Korchnoi challenged for the title and was clearly one of the two best players in the world. He was still among the best in 1999, but it was hard to believe that he was as strong as he was in 1999.)

OTOH, chess is a game of skill, and over time players can get better in a general sense if not relative to their cohorts.

But the big thing to remember is that the Elo rating is statistical in nature, and is designed to record the likelihood of given results between players in the same rating pool. So comparing ratings from 1978 to 1999 or 2013 doesn't necessarily make any sense. Players drop in and out of competitive chess over time, thus changing the pool of players.

Meanwhile, in the US, most old hands seem to believe their has been rating DEflation over the last few decades. An influx of young players led to that situation. The thinking is that rapidly improving juniors are usually underrated, and while they climb the ladder they take a lot of points off older players. Then those junior players tend to drop out, taking their gains with them and not allowing the seniors to earn the points back after the juniors stabilize in their progress. Not sure that this scenario makes sense, but that's how it felt back in the 1990s and 2000s. It seems like this ought to be testable with some models. I DO know that when I look back at old games of mine I think that the ratings of the players from the 1980s look way too high compared to now for the levels of (non-opening) play displayed.

Ken Regan has been doing work on this topic, too, using computer engines to evaluate the strength of moves played. There are some obvious problems with such an approach that he tries to account for. He calls it the Intrinsic Performance Rating, and you can read about it here. He's done other work on the matter, as well as work on identifying computer cheaters. Thus a certain amount of opening moves do not get evaluated, nor do endings from the old days when games were adjourned, IIRC. I seem to recall that Regan has shown that players actually ARE getting stronger over time, at least at the top of the heap. So the rating inflation may actually be accounting for actual improvement in skill at the board. (As opposed to skill in preparation away from the board.)

Kasparov suffered a psychological collapse, he wasn't outclassed by the computer.

1. There's been some back and forth on how much chess loads on the g-factor. There was initially a study saying it was largely separate but that seems to be challenged right now: http://www.psmag.com/blogs/news-blog/champion-chess-players-smart-yes-question-65735/

2. Last time I checked there are still players who can beat chess computers by playing special anti-computer strategies (closed positions & sharp sacrifices) .. e.g. http://www.chessgames.com/perl/chessgame?gid=1497429 .. I'm not sure if this is still the case though

it's impossible to measure in any way i can think of because of the obviously overwhelming "practice effect". the same goes for mathematics. all one can say is there's some threshold for a certain level of performance.

i thought that still even now in 2013 the one player who's moves most often coincided with the best engines' moves or whose moves were highest rated by the best engines was the blue eyed cuban capablanca.

i thought that it was a matter of time per move. at first the machines won at blitz. then at standard. but they still lose at sufficiently long intervals. but i suppose with postal chess this may just come down to the human selecting the best of computer suggested moves?

I think he's right: learning his IQ only has downside for him, potentially affecting his confidence, or his competitor's confidence. As for science, if you are studying his brain I think you can safely put him in the 'high functioning' grouping whatever your definition.

They used to call him the "machine". He was world champion for 6 years and was noted for his sheer speed of play. This was devastating to opponents during the end game as time runs out. He also played 103 simultaneous games once and won 102 and drew one.

you might also be interested in these. so might steve. there's so little hard info on the topic. the wordsum is a good proxy as vocanb is the most g-loaded and most reliable of the wechsler subtests. the author is a penn grad and jd mba turned programmer. apparently all the benefit of iq is mediated by educational attainment.

Kasparov must surely have had some exceptional mental abilities that are not measured by IQ tests, perhaps more to do with memory and patterns recognition.