It came from the sky 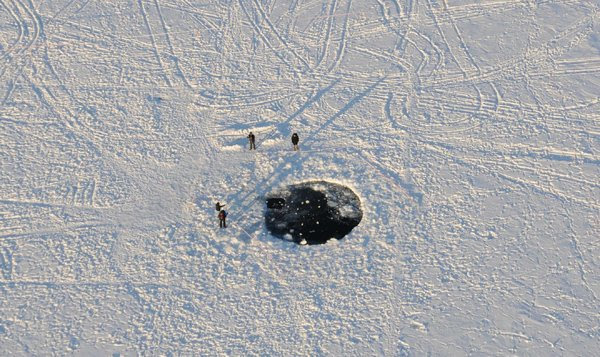 What a great photo (see video). Also looks a bit like observers near a black hole!


NYTimes: When an asteroid exploded over the Russian city of Chelyabinsk in February, shattering windows for miles and injuring well over 1,000 people, experts said it was a rare event — of a magnitude that might occur only once every 100 to 200 years, on average.

But now a team of scientists is suggesting that the Earth is vulnerable to many more Chelyabinsk-size space rocks than was previously thought. In research being published Wednesday by the journal Nature, they estimate that such strikes could occur as often as every decade or two.

... A 450-foot-wide asteroid, Dr. Lu said, would be equivalent to 150 million tons of TNT. “You’re not going to wipe out humanity,” he said, “but if you get unlucky, you could kill 50 million people or you could collapse the world economy for a century, two centuries.”

Dr. Lu said astronomers had found only 10 to 20 percent of the near-Earth asteroids of that size.

Sentinel would also spot many smaller ones that could still be devastating. “What we’ve been talking about are the ones that would only destroy a major metropolitan area — all of New York City and the surrounding area,” Dr. Lu said.

He said only about 0.5 percent of these smaller asteroids, roughly the size of the 1908 one, have been found.

Because telescope surveys have counted so few of the small asteroids, Dr. Brown and his colleagues instead investigated what has actually hit the Earth. In one of the articles in Nature, they examined United States Air Force data from the 1960s and 1970s and later data from sensors verifying a ban on aboveground nuclear weapons testing.

The recordings captured the low-frequency atmospheric rumblings generated by about 60 asteroid explosions. Most came from small asteroids, but their data suggested that the somewhat larger ones hit more frequently than would be expected based on the estimates from sky surveys. That could mean the Earth has been unlucky recently, or that the estimates on the number of Chelyabinsk-size asteroids are too low.

“Any one of them individually I think you could dismiss,” Dr. Brown said, “but when you take it all together, I think the preponderance of the evidence is there is a much higher number of these tens-of-meters-size objects.”

Most large (over a kilometre in diameter) near-Earth asteroids are now known, but recognition that airbursts (or fireballs resulting from nuclear-weapon-sized detonations of meteoroids in the atmosphere) have the potential to do greater damage1 than previously thought has shifted an increasing portion of the residual impact risk (the risk of impact from an unknown object) to smaller objects2. Above the threshold size of impactor at which the atmosphere absorbs sufficient energy to prevent a ground impact, most of the damage is thought to be caused by the airburst shock wave3, but owing to lack of observations this is uncertain4, 5. Here we report an analysis of the damage from the airburst of an asteroid about 19 metres (17 to 20 metres) in diameter southeast of Chelyabinsk, Russia, on 15 February 2013, estimated to have an energy equivalent of approximately 500 (±100) kilotons of trinitrotoluene (TNT, where 1 kiloton of TNT = 4.185×1012 joules). We show that a widely referenced technique4, 5, 6 of estimating airburst damage does not reproduce the observations, and that the mathematical relations7 based on the effects of nuclear weapons—almost always used with this technique—overestimate blast damage. This suggests that earlier damage estimates5, 6 near the threshold impactor size are too high. We performed a global survey of airbursts of a kiloton or more (including Chelyabinsk), and find that the number of impactors with diameters of tens of metres may be an order of magnitude higher than estimates based on other techniques8, 9. This suggests a non-equilibrium (if the population were in a long-term collisional steady state the size-frequency distribution would either follow a single power law or there must be a size-dependent bias in other surveys) in the near-Earth asteroid population for objects 10 to 50 metres in diameter, and shifts more of the residual impact risk to these sizes. [ Italics mine ]

"Dr. Lu said astronomers had found only 10 to 20 percent of the near-Earth asteroids of that size."


Why hasn't this been a priority?

This is one of the things that really pisses me off about government waste. We throw away money on all sorts of programs that are a far cry away from being public goods, but something like this is so obviously a public good and the government neglects it.

I can see that it would be a disaster, but collapsing the global economy for a *century* seems like at least an order of magnitude too long - where does that estimate come from?

Am I the only one to notice that this picture looks eerily like the one in the fifties movie "The Thing"?

That is an interesting academic question. How far back, relatively speaking, do we need to be forced to go before we can recover to 'now', given that we know that this is where we want to get to?

As long as the libraries of scientific and engineering information aren't lost it should only take a few decades. I disagree that what constitutes "now"should be our target though. No need to re-invent 1959 tail fins on cars or even striped toothpaste or non-fat cafe lattes for that matter.

A lot of good could come from smallish meteor impacts. Wages for the average yeoman in Europe went up after the Black Death.