The greatest of all time 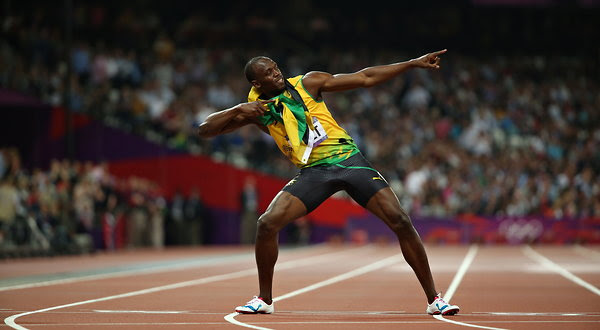 Bolt becomes the first man to repeat in the 100m and 200m, holding the world and Olympic records in both. As I said in my earlier post, he is a 1 in a billion (or more) talent.


“If he wins, that should end the debate about who is the greatest sprinter in history,” Ato Boldon of Trinidad and Tobago, who won bronze medals in the 200 at the 1996 Atlanta Games and the 2000 Sydney Games, said before the race. “Anyone saying it is not Bolt would be doing it without objectivity.”

In other news, as I predicted years ago, former UO competitor Ashton Eaton is the Olympic champion and world record holder in the decathlon.

For a moment I thought Blake might catch him, but Bolt pulled away to win comfortably. It's like a man racing against boys.
Interesting comments from their coach Glen Mills:
I think Blake has all the potential to be an even better sprinter than he is,’ he said. ‘He is a very young world champion. He will continue to make tremendous strides forward over the next couple of years. He is the fastest we have ever had at high-school level despite all the greats that came before him. He is no ordinary sprinter.’
http://www.dailymail.co.uk/sport/olympics/article-2186298/London-2012-Olympics-Yohan-Blake-luck-beastly-Usain-Bolt.html#ixzz2367XS21u

Just ran across this article where a comparison between Bolt and Eaton is attempted:
http://www.nytimes.com/2012/08/10/sports/olympics/ashton-eaton-wins-gold-medal-in-decathlon.html?smid=fb-share

"Usain Bolt took a momentary break from basking in his historic
Olympic sprinting double to fiercely criticize former U.S. athlete Carl
Lewis.
Soon after winning gold in the 200 meters at the London
Olympics for 100 and 200 titles at back-to-back games, Bolt said
Thursday he had "lost all respect" for Lewis after the American was
quoted as saying Jamaica's doping controls were not as strong as other
countries.
While not making any direct accusations, former 100 and
200 Olympic champion Lewis has said in recent years that Jamaican drug
testing procedures might need to be tightened."

Hope that 400m between Bolt and Rudisha goes ahead!

If Bolt trains seriously for it my money is on him. Sub-44?

I think he would probably win too, he showed serious pain endurance towards the end of last night's race. Actually it would be nice to have them face off in a whole series at 400, 500, 600, to determine the exact dividing line between sprints and middle distance ...