Back in the MACT

Neal Stephenson, in the foreword to David Foster Wallace's Everything and More, wrote about growing up as a faculty kid in a Midwestern American College Town (MACT). The six year old Stephenson, whose father was a professor of Electrical Engineering, moved to Ames, Iowa the year I was born. He attended Ames High School as did I. When I met Stephenson in person, we compared notes and discovered that some of my friends were the younger siblings of his friends.

Now I am back in the midwest -- in the MACT of East Lansing, Michigan. Feels like home.


Everything and More foreword (2003): When I was a boy growing up in Ames, Iowa, I belonged to a Boy Scout troop whose adult supervision consisted almost entirely of professors from the Iowa State University of Science and Technology ...

Click the link above or the images below to read more. 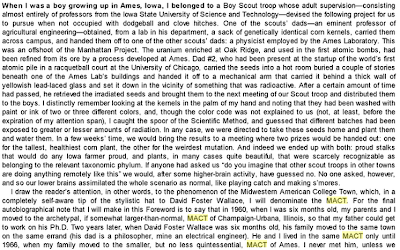 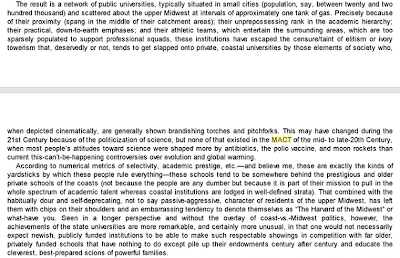 It's funny to me. As a kid, I never made mistakes like that, but as I creep towards 40 the homonyms are slipping in all over the place.

How on Earth is it even supposed to be a homonym? What kind of demented English do you guys speak?!?


Avoiding the homonym traps as if they aren't there ('cause they aren't) is one of the (few) advantages of not being a native speaker ;)


Back to the subject. I wonder what it was like growing up in Huntsville in the fifties/early sixties what with all those Germans around. There must have been a clear before and after they showed up.

I have heard that Huntsville is still pretty clearly not Alabama.

I have been wondering if the increase in my word errors is due more to age or to reading material that is full of errors (i.e. the internet). and unconsciously repeating those errors. When I was younger most of my reading material was magazines, books, and newspapers--all of which are edited. Any thoughts?


Steve, thanks for the article. It was an interesting read on midwest and MACT culture. Has anyone read the rest of the book? It looks interesting.

No good thoughts. When I was early-20s-ish, even if a mistake made it through my fingers, I backspaced before I started the next work. Now, I have to stop every couple of paragraphs and reread what I wrote. I catch all kinds of stuff, but the homonyms stick out because they were such a peeve as a kid.

"...whose adult supervision consisted almost entirely of professors from the Iowa State University of Science and Technology..."

Pedophile profs? I though they'd all be in the social "sciences".

A large fraction of the founding fathers of Silicon Valley were brought up in Midwestern American College Towns. Tom Wolfe pointed out in 1983 that Robert Noyce growing up in Grinnell, Iowa was prototypical, and when I looked into it recently, I noticed a whole bunch more were from MACTs.


Also, since Ag Schools were so important at MACTs, this helps explain why Silicon Valley founders tended to be into genetics. To an urban East Coast intellectual who has never thought about breeding better crops and livestock, this excerpt from Stephenson about modifying corn screams "Eugenics!" But, lots of big names in the history of Silicon Valley, such as its two main founders, William Shockley and Fred Terman, were ardent eugenicists.


What do you admire about the Puritans?

They were tremendously effective people. They completely took over the country and they created an army pretty much from scratch that kicked everyone's ass. This is not always a good thing. They were guilty of some very bad behavior in Ireland, for example. But any way you slice it they were very effective. Cromwell was a tremendous military leader. A lot of that effectiveness was rooted in the fact that they had money, in part because persecuted religious minorities, if they're not persecuted out of existence, often manage to achieve disproportionate wealth. It happened with Jews, Armenians, Huguenots. Earlier in this project, I could have rattled off five more. They have to form private trading networks and lend each other money. They're unusually education conscious. Puritans -- and when we say Puritans, we're talking about a whole grab bag of religious groups -- tended to prize literacy and education. I'm sure they had a higher literacy rate than the general English population. Literacy and education make people more effective.

Another answer is that they very early on adopted a set of views on social topics that everyone now takes for granted as being basic tenets of Western civilization. They were heavily for free enterprise. They didn't want the state interfering in private property. Now our whole system is built on that. We tend to forget that someone had to come up with that idea and fight for it. And those people did.

It's hard for me to see how any but the most unusual people could divest themselves of sensibilities formed by brute farm culture.

Have you read "Everything and More"? Recommended?

You won't learn much other than historical trivia. Better for non-experts.

East Lansing like many medium sized college towns is a good place to live. A professional at Moo U earns a relatively high income for the area, housing is affordable, schools are good, cultural events are readily available.. and lately you get to go to the final four or Pasadena every now and then.