My review of George Szpiro's Pricing the Future: Physics, Finance and the 300-year Journey to the Black–Scholes Equation is in this month's Physics World. I'll post a link to the review itself if and when they make an ungated version available. Until then you'll have to content yourself with the excerpts below (click for larger version). See related post with some notes I made for the review. 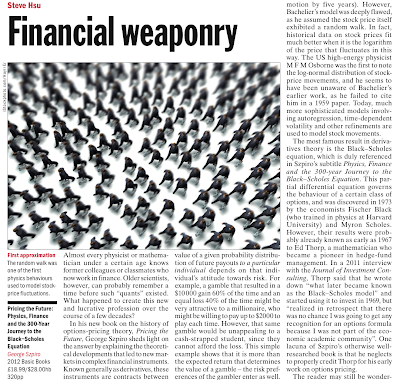 
Almost every physicist or mathematician below a certain age knows a former colleague or classmate who now works in finance. Older scientists, however, can probably remember a time before such “quants” existed. What happened to create this new and lucrative profession over the course of a few decades?

... but experts are violently divided on the more general societal utility of advances in derivatives theory and practice. The conventional view, taught in business schools and in economics departments, is that financial innovation enables economic dynamism and allows markets to allocate resources more efficiently. The opposing perspective, held by none other than billionaire investor Warren Buffett, is that derivatives are "financial weapons of mass destruction" -- speculative instruments in a complex global casino that carry more risk than benefit. When Buffett’s company, Berkshire Hathaway, bought the reinsurance firm General Re in 1998, the latter had 23,000 derivative contracts. Buffett later explained his attitude towards these contracts to a US government panel: “I could have hired 15 of the smartest people, you know, math majors, PhDs. I could have given them carte blanche to devise any reporting system that would enable me to get my mind around what exposure that I had, and it wouldn’t have worked,” he said. “Can you imagine 23,000 contracts with 900 institutions all over the world, with probably 200 of them names I can’t pronounce?” Ultimately, Buffett decided to unwind the derivative deals, even though doing so incurred some $400 million in losses for Berkshire.

The recent financial crises suggest that Buffett’s attitude may be the right one, and that the potential benefits of derivatives and other complex instruments come with dangerous systemic risks. At a recent meeting to address post-crisis financial reforms, the former chief of the US Federal Reserve, Paul Volcker, commented: “I wish somebody would give me some shred of evidence linking financial innovation with a benefit to the economy.” In Pricing the Future, Szpiro gives us a colourful history of derivatives, but does little to address Volcker’s fundamental question.

I was trying to shelter billions of dollars, 23,000 derivative contracts doesn't seem like that much protection [if they are in standard sizes, not bespoke over the counter coverage].

Everyone knows this.  This is a pretty standard morality play where we all know working in finance is the evil but lucrative option.

"...speculative instruments in a complex global casino that carry more risk than benefit..."

The keyword is speculative. When derivatives are used to hedge they're a good thing. Recently the NYTs reported that < 10% of crude oil futures contracts were hedges.

But then what happens when the hedge is in place? Levering up.

Buffet v. Buffett: you have revealed your Limbaugh addiction.

“I wish somebody would give me some shred of evidence linking xyz innovation with a benefit to the economy.”   Ouch!  The danger there is that Volcker (who I hold as among those guilty of creating the 2008 panic), as an advocate of activity-halting regulation, is bordering on communist style planned-economy thinking.  Need we prove to Lord Volcker that something is a benefit (in whatever way he defines that) for it to be permissible?
FYI, I hold Volcker guilty because during the 1930's depression, laws were enacted to forbid interest payment on demand deposits.  Under Volcker's tenure at the fed, interest bearing "demand deposits" (NOW accounts, money market funds, etc...) were allowed to re-appear, and the number one systemic problem with Lehman's default was the commercial paper default due to the public believing they had interest bearing riskless demand deposit once again ...

This is satire, right?

I wish it was ...but I have studied the financial panic cycle over many centuries ... it is never "systemic risk" but always bubbles and demand deposits.  Beat up on bankers as you will, but they don't create tulip bulb mania, sub-prime mania, south sea mania, or any of the rest.

If you define anything that turned out badly as a demand deposit, sure. Otherwise they had nothing to do with tulips, the Mississippi or South Sea companies. Nor do I accept your version of the current mess.
But to answer your question, you bankers should indeed have to get the permission of political authorities to do anything. Otherwise, if they allow your misdeeds to go forward with bad consequences, they are as criminal as you. Just stupider, if they didn't share fully in the reward of your crimes.

Ever heard of legislation called the Community Reinvestment Act?  Or perhaps heard of the Office of Federal Housing Enterprise Oversight?  Put down the bankers all you like, but if you think the "political authorities" are part of the solution ... well, the record ain't good.  (Tiny note, I don't equate bubbles with interest bearing demand deposits - I just point out that those are the two main engines for producing financial panics.)

It's very surprising to me how crass a GS partner can be.

The Soviet Union had engineers, farmers, scientists, managers, builders, ... I wonder how many muppet face-rippers it had? Cuba isn't much poorer than Chile or Argentina today. Why?

Wanted to work for a defense contractor I think. Nothing but poor in your pedigree you've said. Maybe your dad was in the military? Maybe you're from the hollers?

Oh PARRY, always with the giggle-inducing crazy talk.  Do you want a discussion of the outcomes of attempts at open-loop and closed-loop control of the economy?  What language do you speak?  Maybe we can translate 'communist style planned-economy thinking' to words that you can understand.

Just questions Dave, no propositions. When just asking questions is crazy talk it a SURE sign you've fallen for an ideology.

In your case I suppose you are a market fundamentalist. Market fundamentalism predominates among what the British call the "middle class". That is crass strivers. These people are in the same class as snake handling illiterates from Appalachia as far as I'm concerned.

London Young is a fundamentalist. His name is Paul Young. He is a partner at Goldman Sachs. He earned a PhD in applied physics from Harvard. The "misfortune" of military cutbacks led him to Wall Street. This is all an interview available online.

The scum at GS does not exist in communist countries. That's a plus. If your job is solving problems man has made for himself rather than problems presented to man by Nature you're not really working.

With all of the facts of the internet available to you, you can't be bothered to consider them yourself. I can't see that you are arguing from a position of any credibility on any level. Dissembling by calling rhetorical questions 'just questions' undermines your tactics. For all that I can tell, you are just a chatterbot. PARRY is ELIZA's mentally defective cousin.

In horse racing, people meet at the yearling sales and talk about who sired whom. By the time those horses have finished their first year racing, people are talking about their class. How fast they run is a more salient indicator of their ability than to whom they are related. If LondonYoung is really whom you say that he is, and has had the rising success that you indicate, then that is class. I wish I could get some money down on him, but he has probably already made shitloads of money.