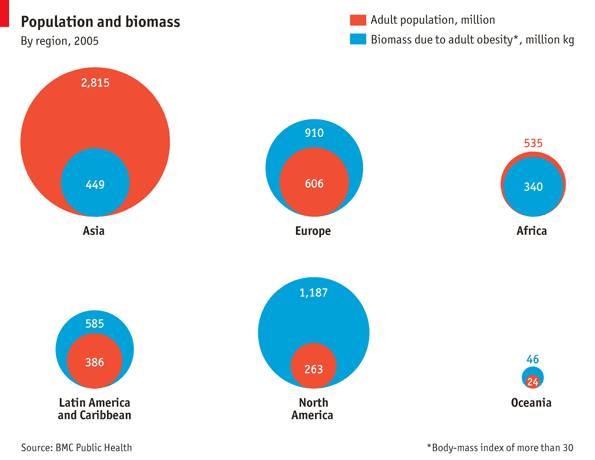 Email ThisBlogThis!Share to TwitterShare to FacebookShare to Pinterest
Labels: sad but true

That's amazing. The African and Asian graphics are stunning, and it's difficult for me to comprehend Africa in particular. I thought it would look much more like Asia. Western media bias?

This is an interesting issue. There was a discussion about this on BBC radio recently and the implication was that westerners are somehow immoral because they are consuming precious food resources and using the energy to sustain excess (and some may argue unhealthy) biomass. But if it's the excess consumption that's immoral, surely an obsessive runner who eats 3000+ kcal a day and then uses the excess energy to make an unnecessary run is just as guilty as a couch potato?

So what is it you suggest Steve? How will this play out going forward as Asia moves up the economic ladder? I am inclined to think it is more an economic issue than an HBD outcome. Do you have data for Japan on its own? How about within Asia with based on income?

Data quality may be an issue here.

As another says, "data quality" may be driving this. That, and the idea that "Asia" is a homogeneous economic, racial, cultural, or anything-more-than-an-accident-of-geography bloc.

It's great to know that there are 3.5 billion kilos of flab split between these 4.6 billion humans but the per capita figures are more informative:

This graphic is terrible, it has exacerbated my sore head. The size scale is not consistent across population and flab and I don't know why these things should be on the same graph..