This paper will be available tomorrow at the link.

We show that big bang cosmology implies a high degree of entanglement of particles in the universe. In fact, a typical particle is entangled with many particles far outside our horizon. However, the entanglement is spread nearly uniformly so that two randomly chosen particles are unlikely to be directly entangled with each other -- the reduced density matrix describing any pair is likely to be separable.

When two particles interact, their quantum states generally become entangled. Further interaction with other particles spreads the entanglement far and wide. Subsequent local manipulations of separated particles cannot, in the absence of quantum communication, undo the entanglement. We know from big bang cosmology that our universe was in thermal equilibrium at early times, and we believe, due to the uniformity of the cosmic microwave background, that regions which today are out of causal contact were once in equilibrium with each other. Below we show that these simple observations allow us to characterize many aspects of cosmological entanglement.

We will utilize the properties of typical pure states in quantum mechanics. These are states which dominate the Hilbert measure. The ergodic theorem proved by von Neumann implies that under Schrodinger evolution most systems spend almost all their time in typical states. Indeed, systems in thermal equilibrium have nearly maximal entropy and hence must be typical. Typical states are maximally entangled (see below) and the approach to equilibrium can be thought of in terms of the spread of entanglement. ...


Professor Buniy in action! (Working on this research.) 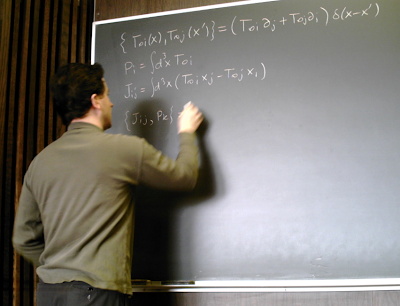 What does 'far outside our horizon' mean?

I have more questions than answers, but the paper clarifies some things.  As I think about it naively, mixed states look like [to make up a word] autoentanglement.  Is there a reason not to think about a mixed state as a self interaction?

The link in your post reminded me that i have a question.  Is it cosmological orthodoxy to think that the universe started life with some non-infinitesimal size? [Physically speaking, that seems natural, but the basics of calculus would have you believe that everything starts life as smaller than small.]