What use is game theory?

Fantastic interview with game theorist Ariel Rubinstein on Econtalk. I agree with Rubinstein that game theory has little predictive power in the real world, despite the pretty mathematics. Experiments at RAND (see, e.g., Mirowski's Machine Dreams) showed early game theorists, including Nash, that people don't conform to the idealizations in their models. But this wasn't emphasized (Mirowski would claim it was deliberately hushed up) until more and more experiments showed similar results. (Who woulda thought -- people are "irrational"! :-)

Perhaps the most useful thing about game theory is that it requires you to think carefully about decision problems. The discipline of this kind of analysis is valuable, even if the models have limited applicability to real situations.

Rubinstein discusses a number of topics, including raw intelligence vs psychological insight and its importance in economics (see also here). He has, in my opinion, a very developed and mature view of what social scientists actually do, as opposed to what they claim to do.

Rubinstein reminds me strongly (in intellectual style, manner of speaking) of other great Israeli academics I have known. Such people are a treasure.


Ariel Rubinstein of Tel Aviv University and New York University talks with EconTalk host Russ Roberts about the state of game theory and behavioral economics, two of the most influential areas of economics in recent years. Drawing on his Afterword for the 60th anniversary edition of Von Neumann and Morgenstern's Theory of Games and Economic Behavior, Rubinstein argues that game theory's successes have been quite limited. Rubinstein, himself a game theorist, argues that game theory is unable to yield testable predictions or solutions to public policy problems. He argues that game theorists have a natural incentive to exaggerate its usefulness. In the area of behavioral economics, Rubinstein argues that the experimental results (which often draw on game theory) are too often done in ways that are not rigorous. The conversation concludes with a plea for honesty about what economics can and cannot do.

Here is Rubinstein's Afterward to the 60th anniversary edition of Theory of Games. It is only a few pages and definitely worth reading if you have any interest in game theory, or if you are pressed for time and can't listen to the podcast. See p. 634:


So is game theory useful in any way? The popular literature is full of nonsensical claims to that effect [Remember the FCC bandwidth auctions?] ... Most situations can be analyzed in a number of ways, which usually yield contradictory "predictions" ...

Note Added: Ariel Rubinstein found this post and sent me a nice email with a link to this photo album of cafes around the world where he likes to work. Below is one of the places I've actually been to (Brewed Awakening in Berkeley). I guess academics should not complain about our lot in life :-) 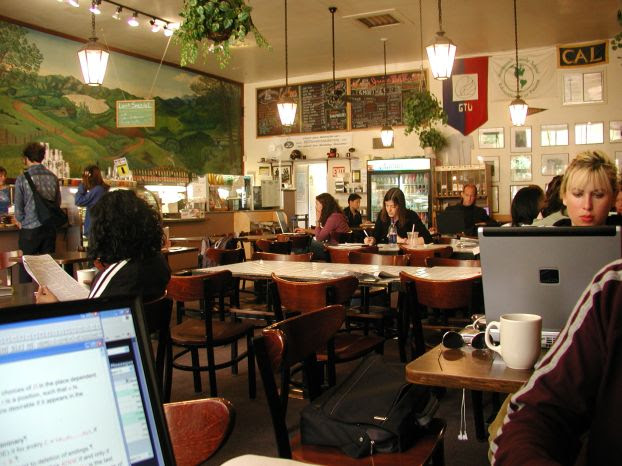 Nash shared his Nobel with Harsanyi. As soon as you start deal with Harsanyi [mixed strategy equilibrium] you see that there is more to the story. Game theory for me is more of a beginning than an end [though, I'm happy for lots of people to believe in it as an end].

Though I think for most people most of the time, most decisions are made irrationally (ie, without conscious calculation), I don't think the trouble with game theory is that people are largely irrational. Game theory models scenarios of strategic competition. People in such real-world scenarios are more likely to make decisions rationally than they are other contexts, I suspect. I think the trouble with game theory is that it presumes a notion of rationality that is so restrictive as to be useless in most applications. Real decisionmakers take more factors into account than their game-theoretic counterparts do, and thus can reach decisions that are 'irrational' by the standards of the game theoretic notion of rationality. (And, of course, there's all the trouble of accounting for cognitive limitations and imperfect information.)

Of course, the whole thing hinges on whether one actually has a good definition of rationality (or utility). The early researchers in decision and game theory thought they might actually solve this problem but it's obvious they cannot. Is the goal (normative) to define what a "rational" person "should do" in a particular situation? Or is it to predict what actual people do? For the latter, psychology is as or more important than economics and all the pretty math will turn out to be of limited use.

"... we assume that each player is rational from some perspective"

If that includes crashing a 747 into a skyscraper because of something you believe about the afterlife, then I suggest it's not much of a constraint on decisions / actions in this life.

In poker cash games, game theory has a narrow application: when you're up against someone who generally outplays you, it is useful to fall back on equilibrium mixed strategies that minimize your expected loss. However, you should only put yourself in this situation if you can generally outplay the rest of the table by more than enough to negate your disadvantage against the shark; otherwise the correct move is to get up and find weaker opponents.


I think something similar is true in many, many other life situations.

Any idea who 'liked' this? I assumed that you got my first comment and then the edit in your email, in which case the sequence should make sense. It dawned on me that you might only get links to comments, and not the actual text. I want to clarify that the half-baked comment that I was referring to was mine, which I deleted in lieu of this one, and not yours.

I use game theory (potential games, specifically) to design distributed algorithms where multiple AIs interact with one another. It allows me to bound convergence time, guarantee stability, and predict operating points.

I saw the earlier comment you deleted, but I'm not the one who 'liked' it :-)

"Or is it to predict what actual people do?"


I’ll wager my inside straight on this posit.