I've been meaning to post about this report on high level math competitions which appeared in the Notices of the American Mathematical Society. The table below is a good summary of data in the paper. (Click for larger version.) 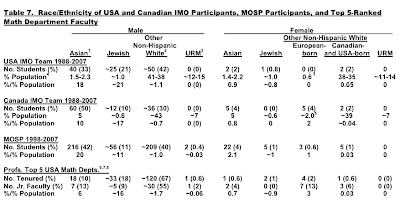 My guess is that this population is roughly +4 SD in math ability and +(3-4) SD in g. For detecting useful (very) high end ability I trust these competitions more than tests of g, with the proviso that training has a strong effect on performance.

Here's something about what psychometricians would call the "validity" of the test :-)


The skill sets necessary to excel in mathematical problem solving and mathematics research are not identical. Research requires the stamina to work on problems over extended periods of time without knowing whether solutions even exist; the competi- tions discussed here require the ability to solve dif- ficult problems known to be solvable under timed conditions. Thus, some world-class research math- ematicians exist who attempted, but did not excel in the Putnam, IMO, or its qualifying examinations. Nevertheless, a high correlation exists between exceptional ability in mathematical research and problem solving since both require outstanding mathematical intuition and creativity along with the interest in devoting considerable time and effort toward acquiring extensive knowledge in the field. Numerous Putnam Fellows have gone on to receive the Fields Medal (the so-called Nobel Prize of Mathematics) or the Nobel Prize in Phys- ics. Some who never quite achieved Fellow status have also been awarded Nobel Prizes. Eight of the eighteen Fields medalists from 1990 through 2006 were IMO gold or silver medalists in their youth, with Grigorij Perelman, who recently resolved the Poincaré Conjecture, having achieved a perfect forty-two in the 1982 IMO.