Sorry for the long absence. I'm sitting in the first class lounge at Shanghai airport, about to fly back. My failure to blog had nothing to do with the Great Firewall -- my proxy fu works perfectly over here.

This is the first espresso I've had in a week: 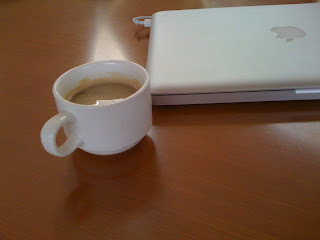 This is the view from the lounge (note I'm not traveling first class; just using the lounge): 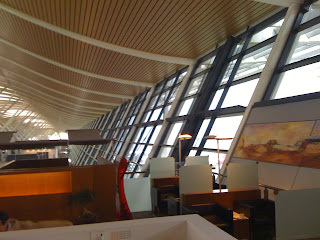 I spent the first week here in Hangzhou, working on a project I've described before. The company involved is a bit sensitive so I'm not allowed to post any photos.

I spent yesterday in Shanghai and was able to see the Expo. The scale of the exposition is just overwhelming. You could spend a week visiting all the pavilions -- even assuming you didn't have to wait in line. I don't know what will become of this space once the Expo is over -- I visited the Expo grounds in Sevilla (1992) five years after the event and it was like a ghost town.

A couple of travel tips. If you're here in the summer, don't go to the Expo during the day -- it's just too hot. Go in the evening when it's cooler and the lines are shorter. The entrances to the Expo are near metro stations, so very accessible. I stayed at an inexpensive hotel -- only 250 rmb ($35 per night; that's how we roll :-) -- a few stops away from the main entrance on the number 7 line and close to the maglev station so I could get to the airport this morning. There are a wide range of restaurants at the park -- you can have inexpensive fast food, or enjoy a long, relaxed dinner at a fancy place.

The attendees at the Expo were overwhelmingly Asian. I'd guess only 1 percent of the 400k visitors in the park yesterday were from somewhere else. People from a broad variety of backgrounds were enjoying themselves. The Expo started as the World's Fair, which was supposed to be a way for people of an earlier era to see the rest of the world without leaving home. Since most Chinese cannot afford foreign travel yet, the event still retains some of that old glamour for them.

The official theme of the Expo is Better City, Better Life. Many exhibits emphasized green issues; I think the environmental movement in China is progressing very fast, with support from the government. See the plug-in electric car below! 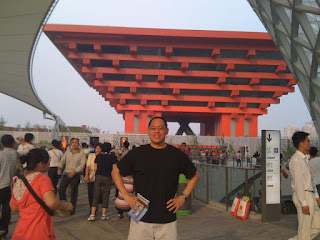 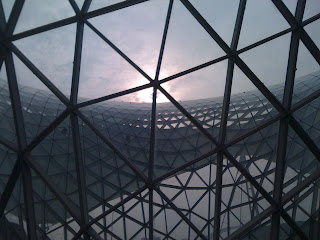 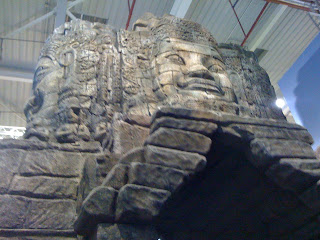 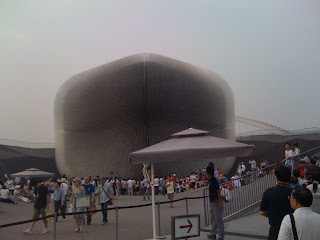 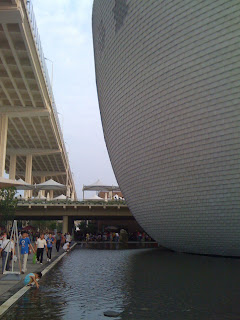 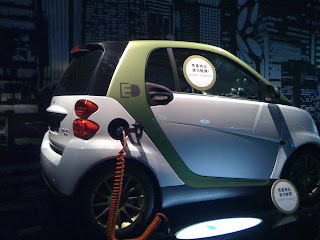 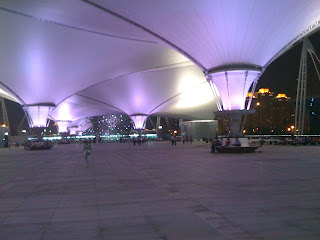 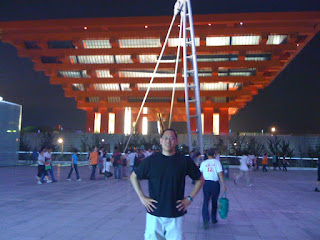 I had an interesting conversation with an ethnic German guy from Namibia that I happened to sit next to on the train from Hangzhou to Shanghai. He owns a chain of supermarkets there and in South Africa and was in China on a buying trip. He noticed me reading a paper on psychometrics and immediately wanted to discuss the implications for development. (Note the paper was a pretty abstract one -- about causal inference!) His thoughts on the prospects of Africa, and comparisons between the US, China and Africa were quite interesting. He was familiar with the results showing group differences between Asians, Europeans and Africans and he accepted those as consistent with his own experiences. But he claimed that the main factor that held Africans back was lack of drive -- why do something today when it can be done tomorrow? He didn't view this as a fault, though. The mad pace of development in places like China seemed excessive to him: Do material things make people happier? he asked.

According to this German-Namibian, in much of Africa one can survive with a minimum of effort -- long term planning and organization aren't required as they would be in a place with harsh winters. Hence, less selection for such traits has occurred. This is of course an old theory, but it was rather amazing to hear it stated so matter of factly by an educated person with first hand knowledge of Africa.
Posted by Steve Hsu at 10:53 PM

His thoughts on the prospects of Africa, and comparisons between the US, China and Africa were quite interesting.

Did your enlightened German colleague lament the lack of rule of law in both China and Africa?
Underneath the veneer of the Shanghai Expo lies a country still mired in a state of semi-civilized savagery.

All of this talk of a unique Chinese model of governance is hot air. Such a model has persisted so far only because the country is still extremely poor economically. Authoritarianism may legitimate itself early on in a country's development by efficiently bringing about vast social and economic improvements, but it can't be sustained once a nation reaches a certain level of socioeconomic development.

Of course we know that Steve is enamored by this idea of Chinese uniqueness, given his posts on such books as Martin Jacque's "When China Rules the World". He's also blogged about the concept of performance legitimacy, referring to it as an analogue of the mandate of heaven. Ironically, the mandate of heaven is upheld insofar as a ruler behaves justly. You would think that arbitrarily arresting citizens, subjecting them to beatings, and imprisoning them wouldn't qualify as being just under anyone's definition. Nor would denying people freedom of speech and freedom of expression qualify either. And yet all of these issues are glossed over, and it's full steam ahead promoting this new idea du jour of Chinese uniqueness. Who was it who once stated that "scientists are only less susceptible than others to group think"? I believe it was an extremely wise man.

The 19th century Japanese intellectual Fukuzawa Yukichi once stated that the winds of Westernization were blowing across Asia and that those countries had to embrace the movement in order to "taste the fruit of civilization" or be hopelessly left behind. He wrote those words at a time when Japan began modernizing, while China and Korea resisted changed. Lo and behold. Now Japan is the most developed country in Asia. That must be pure coincidence. Modernization doesn't mean embracing every aspect of Western civilization. It does however mean accepting a certain set of foundational principles most conducive to attaining a higher level of civility. I see China at a crossroads. Either it can take the final step and truly modernize, or it can linger on in a state of authoritarian mediocrity. What's most self destructive is the inferiority complex I find amongst many Chinese, leading to a hypersensitive reaction against any kind of criticism and also to a frequent and misguided lambasting of the West as a bogeyman for much of China's current woes. The Chinese boldly proclaim that they've "grown a spine" and are now willingly to stand up to the West! Gee, you'd think that they'd stand up against their own government and for their own rights first. I suppose given how poor much of the nation is, most people are too busy living their lives and getting by, rather than focusing on the higher issues of politics. But 20 years from now, the Chinese will have no such excuses.

Democratic ideas, like green ideas, are spreading pretty fast in China. I would be very surprised if the country isn't much more democratic and protective of individual rights in 20 years.

I wish I had gotten your advice last week! I went to the Expo once last week with a friend (Ben Chow from UCSD), but we went in the morning. At first it was OK, but it soon got way too hot. We hung out mostly in an air-conditioned restaurant and Starbucks.

I stayed in a hotel near East China Normal, where there were no Starbucks or any other espresso place to be found. Luckily, I now carry along a Handpresso everywhere.

And like everybody else I want to hear more about what the German-Namibian said!

Sounds to me like the German-Namibian ventured into highly politically incorrect and sensitive territory... :)

***lack of drive -- why do something today when it can be done tomorrow?***

This would be consistent with Greg Clark's ideas in 'Genetically Capitalist?'.

"In this paper I argue that there is evidence that the long Malthusian
era in stable agrarian societies actually changed human
preferences, perhaps culturally but also perhaps genetically. To
show this I demonstrate first that for England the rich had a
reproductive advantage at least from 1250 onwards. I also show
that this advantage was likely inherited by their children. Finally I
show that in the same interval there are signs that preferences
were changing in the pre-industrial economy. In a time when the
rich were taking over genetically people were becoming more
middle class in their orientation: time preference rates were lower,
hours of work longer, and numeracy and literacy increasing. Thus
the long delay between the Neolithic Revolution of 6,000 BC
which established settled agriculture and the eventual Industrial
Revolution may in part be explained by the time necessary for the
formation of preference consistent with modern capitalism."

Cochran & Harpending also mention Clark's work in a deleted chapter of the '10,000 Year Explosion'. There they make the distinction between 'Cad and Dad' societies:

"It is important to emphasize that there is no rigid line between aloof or cad and intimate or dad societies. Almost any generalization about these societies admits exceptions. Nevertheless our description of the cad-dad dimension is useful as a cartoon, a schematic, about how human social systems vary. It is especially useful because it shows how evolutionary theory makes sense of otherwise puzzling patterns in our species...

The most familiar examples to anthropology students of cad societies are found among tropical gardening societies. Gardening can mostly be left to the women, freeing men to be boys. Among economists there is the euphemism of “female farming systems ” to describe the African versions of these groups. The important characteristic of gardening systems is that they are found where land is free and where declining fertility and increasing weediness of a field is countered by abandoning it, girdling some trees, and burning down the forest to create a new field...

These different subsistence ecologies are not only products of evolution and natural selection, they are also important contexts for it. If belligerent violent warriors, killers, have a reproductive advantage as the do among the Yanomamo of the Amazon basin (Chagnon 1988) then over a time scale of centuries males will become better and better at being belligerent and violent. If instead the social system favors white collar skills, like the niche of northern European Jews in Medieval times, intelligence and other related skill will increase. Centuries of peasant farming should select for being a good peasant farmer and related abilities. A system with a high interest rate, social stability, and the rule of law should select for the ability to defer rewards, against violence, and in favor of the ability to work hard."

***This is of course an old theory, but it was rather amazing to hear it stated so matter of factly by an educated person with first hand knowledge of Africa. ***

Indeed, most 'educated' people learn sophisticated cultural explanations for any group differences (they may mention 'Guns Germs & Steel'). They would probably say this guy was 'ignorant'.

OT, but apparently the SAT favours some groups.