We had Andrew Penner of UC Irvine here last week to discuss his paper Gender Differences in Extreme Mathematical Achievement: An International Perspective on Biological and Social Factors. PDF.

I posted back in 2007 on some earlier research of Penner's which showed an 8 percent larger variance in male math ability already at the beginning of kindergarten. (This is not so different from the adult difference in variance.)


In the more recent paper Penner claims that national variation in gender gaps in mathematical ability implies that the effect is culturally moderated. While I don't doubt that culture affects development of mathematical ability, and perhaps in such a way as to favor males, I question whether his paper or other recent papers relying on international tests like TIMSS and PISA really have the statistical power to investigate this issue very well. It is already hard to capture national differences in average ability level from tests of only a few thousand students (ensuring that these students are representative of the whole population is difficult); gender gaps are even smaller effects and therefore more sensitive to statistical and systematic error. See here (figure 4) for a convincing demonstration that PISA data on country by country gender gaps is noise dominated: the gaps are not stable between the 2003 and 2006 results. Only by aggregating the data over many countries do we arrive at a stable gap. This makes me suspicious of TIMSS results because PISA has significantly larger statistics. A meta-analysis suggests that cultural effects, while perhaps non-zero, are relatively small.

Andrew and I had an interesting discussion about his paper; my side is summarized in the message and two figures below.

Sorry I had to leave early from your talk and didn't get to discuss this in person. As I mentioned yesterday and in my earlier email, country level gender gaps are not stable between PISA 2003 and 2006, whereas the meta-analysis gap, averaging over all countries, is stable. This to me is clearly a signal that the PISA country level data on gender gaps is dominated by statistical error, and makes me strongly suspect the same is true for TIMSS.

In the 1995 TIMSS table below there are 8 "gold standard" countries that complied with the statistical procedures. The data from the remaining countries would be suspect, since, as I mentioned, getting a representative sample for a country of millions is not an easy task. In particular, the standard error for countries outside the first group of 8 is likely to be much larger than quoted. (See the column labeled "Difference" in the table. The number in parenthesis is the standard error for the gender gap.)

For the gold standard countries, it appears that all gender gaps are within roughly 1-2 standard deviations (using the standard error given) of the group average, with the exception of Hungary which is an outlier. This suggests that the variation within this group could be entirely statistical. That is, if one formulated a "null model" with constant gender gap across countries, and asked whether TIMSS disfavors that model, the answer might be no, at least not in a statistically significant way. (Actually I suspect that the standard error given is an underestimate, because of systematic errors in the sampling procedures even in the gold standard countries.) Note within this set of countries there is a lot of variation on your societal indicators.

To summarize, I think the claim that TIMSS data supports country level variation in gender gaps has to be considered carefully for statistical significance. As I mentioned, I doubt one can really trust the TIMSS quoted standard errors, so a real test would be time stability of (measured) gender gaps -- a test which PISA fails.

One final comment on your talk: it seems to me that all of the societal variables you listed (labor force participation, wage gap, etc.) have changed significantly in the last 40 years in the US. Nevertheless, I believe gender gaps on the SAT-M (a truly large statistics measurement) have not narrowed during that time. (See second figure below.) 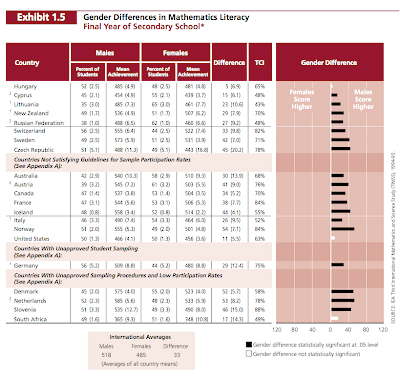 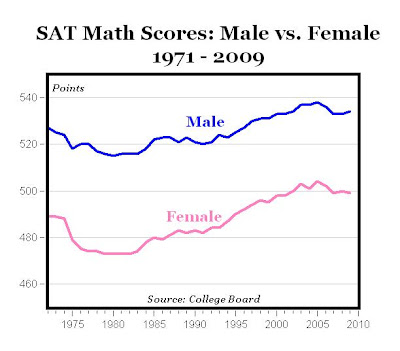 Out of the 85 assignments in the survey about 20 have been published. The assignments are simple numerical calculations, minor problems or deductions, interpretation of statistical graphics and evaluation of situations where text comprehension is an essential part. However, hardly any algebra or geometry is included. Nevertheless, the assignments are well in agreement with the goals of the survey; in fact, the goal was to study everyday mathematical knowledge.

The PISA-survey leaves us, thus, with unanswered questions regarding many skills, like computing with fractions, solving elementary equations, making geometrical deductions, computing volumes of solid objects, and handling algebraic expressions. Still algebra is perhaps the most important subtopic in mathematical studies after the compulsory comprehensive school.

Also, even if social factors do cause variance between countries that doesn't mean that they'll cause similar variance within countries. E.g. there may be larger and highly imalleable disparities in countries where people are free to pursue their interests and vocations.

Hungary is an outlier. So it can be ignored?

The Polgar sisters are outliers too.

The contradictory results in Finland are an example of the frequently made mistake of thinking that because there is a word or phrase there is a reality to which it refers. Here that phrase is "mathematical ability".

Whatever the mathematics test it measures acquired abilities.

To say the gap is biological, what does that mean really?

"To say the gap is biological, what does that mean really?"

In what environment ben_g? All environments, everywhere, at all times past and present, and always to the same extent?

"Men are taller than women."

In what environment? All environments, everywhere, at all times past and present, and always to the same extent?

Just trying to get an idea where your head is at on this matter.

My head isn't anywhere, because there is nowhere for it to be.

But to use this absurd ideological mantra, consider the statement:

"Chinese people are shorter than Norwegians."

What's a Chinese person? If you're talking about a Manchu who isn't lactose intolerant move him to Norway and feed him a Norwegian diet.

The environment of significance here is the normal range of environments found in first world countries.

You could pose the question this way-- to what extent is female math ability in the first world worse because of the environments they receive vs. their genetic differences.

Now, if we were to talk about fundamentally restructuring society, then we'd have to consider other environmental ranges and we can ask how much genes matter vs. environments under those circumstances.

"Now, if we were to talk about fundamentally restructuring society, then we'd have to consider other environmental ranges and we can ask how much genes matter vs. environments under those circumstances."

Good on ya ben.

But douches like Steve think that the way things are is pretty much the way they should be and that any non-biological change is pointless.

Wait did I say "think"? I meant print-out.

Steve is a college professor and therefore in a moral position similar to:

The whole point of his blog is that

are the master race.

*** think that the way things are is pretty much the way they should be and that any non-biological change is pointless.***

You mean the naturalistic fallacy?

Where does Steve say that non-biological change is pointless?

That was the case when I was in school, but I don't think it is anymore. It is still a faux pas to speak in public as if you aren't adhering to the moralistic fallacy though.

I am guilty of neither fallacy.

But I do believe that psychology is a pseudoscience.

I should know. Look me up on google. Read my bio.

"I should know. Look me up on google. Read my bio."

I do think the way things should be is the way they will be eventually.

Call that the "eschatological fallacy".

At the Eschaton Steve and Jacob Zuma will be licking each other's asses.

Butt which one will be in Heaven?