Supermassive black holes and the entropy of the universe

New Scientist has an article about a recent paper by two Australian researchers (http://www.arxiv.org/abs/0909.3983), which contains detailed estimates of the entropy of various components of the universe (black holes, neutrinos, photons, etc.). This paper is related to some work I did with with Frampton, Kephart and Reeb: What is the entropy of the universe?. (Discussion on Cosmic Variance.)

Our work did not focus on the numerical values of various contributions to the entropy (we made some simple estimates), but rather what the physical meaning is of this entropy -- in particular, that of black holes; see excerpt below.

THE mammoth black holes at the centre of most galaxies may be pushing the universe closer to its final fade-out. And it is all down to the raging disorder within those dark powerhouses.

Disorder is measured by a quantity called entropy, something which has been on the rise ever since the big bang. Chas Egan and Charles Lineweaver of the Australian National University in Canberra used the latest astrophysical data to calculate the total entropy of everything in the universe, from gas to gravitons. It turns out that supermassive black holes are by far the biggest contributors to the universe's entropy. Entropy reflects the number of possible arrangements of matter and energy in an object. The number of different configurations of matter a black hole could contain is staggering because its internal state is completely mysterious.

Egan and Lineweaver found that everything within the observable universe contains about 10^104 units of entropy (joules per Kelvin), a factor of 10 to 1000 times higher than previous estimates that did not include some of the biggest known black holes (www.arxiv.org/abs/0909.3983, submitted to The Astrophysical Journal).

If entropy were ever to reach a maximum level, that would mean the heat death of the universe. In this scenario no energy can flow, because everything is the same temperature and so life and other processes become impossible. "Our results suggest we're a little further along that road than previously thought," Egan says.

But although black holes do boost the universe's total entropy, it is not clear whether they will hasten its heat death. Supermassive black holes don't contribute much to the flows of heat that even out temperature throughout the universe, says physicist Stephen Hsu at the University of Oregon in Eugene.

It's true that these black holes will slowly evaporate by releasing Hawking radiation, particles created near the boundary of the black hole. And this radiation could move the universe towards heat death.

Black holes may evaporate via Hawking radiation, tipping the universe towards its heat death. However, it will take some 10^102 years for a supermassive black hole to evaporate. "The entropy inside those black holes is effectively locked up in there forever," Hsu says. So we may have reached a state approaching heat death long before, as stars burn out and their matter decays.

The large result obtained by the Egan and Lineweaver for the entropy of the universe is primarily due to supermassive black holes. How do we interpret that entropy? Here is an excerpt from our paper (excuse the latex).

Note the entropy used in this paper describes the uncertainty in the precise quantum state of a system. If the system is macroscopic the full quantum state is only accessible to a kind of ``super-observer'' who is unaffected by decoherence \cite{decoherence}. Individual observers within the system who have limited experimental capabilities can only detect particular decoherent outcomes. These outcomes arise, e.g., from an effective density matrix that results from tracing over degrees of freedom which are out of the experimenter's control (i.e., which form the ``environment''). In \cite{BID} the experimental capabilities necessary to distinguish decoherent branches of the wavefunction, or, equivalently, the precise quantum state of Hawking radiation from a black hole, are discussed. It is shown that a super-observer would either need (at minimum) the capability of making very precise measurements of accuracy $\exp(- M^2 )$ (see also the proposal of Maldacena \cite{eternal} for a specific measurement to determine whether black hole evaporation is unitary), or alternatively the capability of engineering very precise non-local operators, which measure a large fraction of the Hawking radiation at once, including correlations (i.e., as opposed to ordinary particle detectors, which only measure Fock state occupation numbers and are not sensitive to phase information).

An observer who lacks the capabilities described in the previous paragraph would be unable to distinguish the states in the $S = M^{3/2}$ subspace in Fig.~\ref{figure1} from those in the larger $S = M^2$ subspace, assuming the unitary evaporation resembles, in gross terms, Hawking evaporation, with the information hidden in correlations among the emitted quanta. In that case, the future uncertainty for ordinary (non-super) observers might be better characterized by the larger $S = M^2$ entropy. Putting it another way, an ordinary (non-super) observer is forced (due to experimental limitations) into a coarse grained description of the radiation; they cannot distinguish between most of the radiation states, and for them the $S = M^2$ entropy is appropriate. For a super-observer, however, due to unitary evolution, the uncertainty in the quantum state does not increase. For them, black holes do not have greater entropy than the precursor states from which they formed.

For the super-observers described above, the large black hole entropies in Table I do not reflect the actual uncertainties in the (current and future) state of the universe and are in that sense misleading. A black hole of mass $M$ whose formation history is typical for our universe (e.g., it originated from gravitational collapse of a star or galactic core) satisfies the bound S [less than] M^{3/2} \cite{MI}. Thus, re-evaluating the numbers in Table I, the total entropy of all black holes in our universe is not bigger than the total matter entropy: the dominant uncertainty in the precise state of the universe, at least as far as arises from known physics, is, in fact, due to CMB photons or neutrinos. 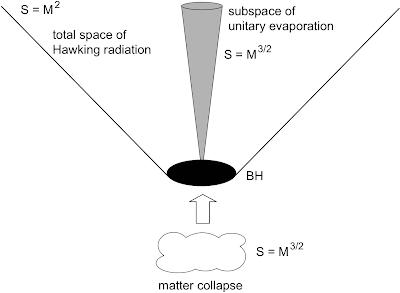 Final mysterious comment, maximally compressed for the cognoscenti: assuming unitarity, black holes do not push us closer to heat death (equilibrium) in the multiverse, but can contribute (albeit very slowly) to the (coarse grained) heat death experienced by a non-super observer (i.e., an observer subject to decoherence). See here for more on equilibrium in the multiverse.
Posted by Steve Hsu at 1:37 PM

I don't recall -- which do you think looks better?

For the mixed math-mode/text, I think it looks better with the slash. In the equation environment, I like \frac better. I \frac as a matter of habit, so I don't have a tightly honed aesthetic about it.