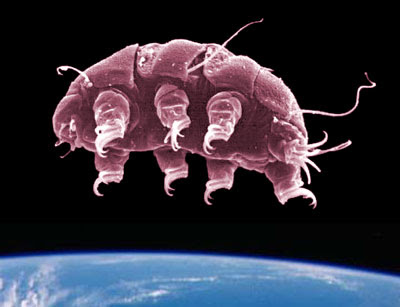 Related posts: Many Worlds: A brief guide for the perplexed, Are you gork?, Label: many worlds


Economist: ONE of the most famous unperformed experiments in science is Schrödinger’s cat. In 1935 Erwin Schrödinger (pictured), who was one of the pioneers of quantum mechanics, imagined putting a cat, a flask of Prussic acid, a radioactive atom, a Geiger counter, an electric relay and a hammer in a sealed box. If the atom decays, the Geiger counter detects the radiation and sends a signal that trips the relay, which releases the hammer, which smashes the flask and poisons the cat.

The point of the experiment is that radioactive decay is a quantum process. The chance of the atom decaying in any given period is known. Whether it has actually decayed (and thus whether the cat is alive or dead) is not—at least until the box is opened. The animal exists, in the argot of the subject, in a “superposition” in which it is both alive and dead at the same time.

Schrödinger’s intention was to illuminate the paradoxes of the quantum world. But superposition (the existence of a thing in two or more quantum states simultaneously) is real and is, for example, the basis of quantum computing. A pair of researchers at the Max Planck Institute for Quantum Optics in Garching, Germany, now propose to do what Schrödinger could not, and put a living organism into a state of quantum superposition.

The organism Ignacio Cirac and Oriol Romero-Isart have in mind is the flu virus. [arxiv] Pedants might object that viruses are not truly alive, but that is a philosophical rather than a naturalistic argument, for they have genes and are capable of reproduction—a capability they lose if they are damaged. The reason for choosing a virus is that it is small. Actual superposition (as opposed to the cat-in-a-box sort) is easiest with small objects, for which there are fewer pathways along which the superposition can break down. Physicists have already put photons, electrons, atoms and even entire molecules into such a state and measured the outcome. In the view of Dr Cirac and Dr Romero-Isart, a virus is just a particularly large molecule, so existing techniques should work on it.

The other thing that helps maintain superposition is low temperature. The less something jiggles about because of heat-induced vibration, the longer it can remain superposed. Dr Cirac and Dr Romero-Isart therefore propose putting the virus inside a microscopic cavity and cooling it down to its state of lowest energy (ground state, in physics parlance) using a piece of apparatus known as a laser trap. This ingenious technique—which won its inventors, one of whom was Steven Chu, now America’s energy secretary, a Nobel prize—works by bombarding an object with laser light at a frequency just below that which it would readily absorb and re-emit if it were stationary. This slows down the movement, and hence the temperature, of its atoms to a fraction of a degree above absolute zero.

Once that is done, another laser pulse will jostle the virus from its ground state into an excited state, just as a single atom is excited by moving one of its electrons from a lower to a higher orbital. By properly applying this pulse, Dr Cirac believes it will be possible to leave the virus in a superposition of the ground and excited states.

For that to work, however, the virus will need to have certain physical properties. It will have to be an insulator and to be transparent to the relevant laser light. And it will have to be able to survive in a vacuum. Such viruses do exist. The influenza virus is one example. Its resilience is legendary. It can survive exposure to a vacuum, and it seems to be an insulator—which is why the researchers have chosen it. And if the experiment works on a virus, they hope to move on to something that is indisputably alive: a tardigrade.

Tardigrades are tiny but resilient arthropods. They can survive in vacuums and at very low temperatures. And, although the difference between ground state and an excited state is not quite the difference between life and death, Schrödinger would no doubt have been amused that his 70-year-old jeu d’esprit has provoked such an earnest following.

Email ThisBlogThis!Share to TwitterShare to FacebookShare to Pinterest
Labels: many worlds, quantum mechanics

I don't get why the whole virus is supposed to react as if it were in a single coherent quantum state. Wouldn't photons interact with individual atoms or molecules?

This is racist against Tardigrades. Stupid racists.

Have a look at the paper (link added to the post above) -- I think it's the center of mass coordinate that gets placed in a superposition state.

If I am too old to see the Singularity, would it not make sense for me, a healthy person, to have myself cryogenically preserved now, before my natural death?

For if I can live another 60 years and not see it, perhaps I should freeze myself now, while I am still in one peace with a solid mind, for the chance to live many thousands of years? A cost-benefit analysis may suggest so!

If I am too old to see the Singularity, would it not make sense for me, a healthy person, to have myself cryogenically preserved now, before my natural death?

What's so great about existence anyway? You have some urge that needs to be fulfilled and you go about thinking once it's fulfilled, everything will be great. But this is BS. For as soon as one urge is fulfilled, the next one shows itself, then the next one, and so on. Your life is nothing but the next ten million urges awaiting you, all crying out so loudly that they cannot be ignored. What a pain in the neck it all is!

So why freeze your head? Is this pointless fulfilling of urges such a big deal to let go of? I'm thankful that there's an end to it!

Like the rest of us, you'll die and you won't give a damn that you did.

How do you know I didn't kill myself? Maybe I did!

Even assuming that I have not killed myself, it's not hypocrisy. It's a recognition of the difference between our irrational desire to keep on going and the rational view not to give a damn. Senseless as life is, most of us can't shake off this silly urge to live. Just like we can't shake off the urge to breathe, eat, drink, and f*ck.

Ah, the dystopic view of reality, as in, since there's no apparent point to existence, why go on? I don't know about you, but curiosity is one of my overwhelming drives, that keeps me,,,keeping on.

SO, what "purpose" would YOU like to see. Personally, I'd like to create a reality where people just naturally give a damn, where Love is not a four letter titter.

There are a few things that are made to last. Love is just one of those.