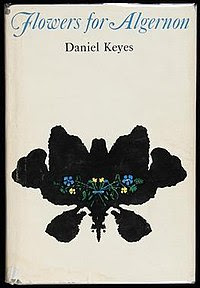 I read this when I was a kid, and it had a strong effect on me, at least in part because I had a next-door neighbor who was my age and mentally retarded. Now that I'm a parent it strikes me that we all follow the path of Charlie Gordon -- starting from modest intellectual ability, developing to a peak, followed by inevitable decline. It happens more gradually for us than for him, but we are equally aware of the process and where it leads.

Wikipedia: ... The titular Algernon is a laboratory mouse who has undergone surgery to increase his intelligence by artificial means. The story is told as a series of progress reports written by Charlie, the first human test subject for the surgery.

... Another key moment came in 1957, while [author] Keyes was teaching English to students with special needs; one student asked him if it would be possible to be put into a regular class if he worked hard and became smart.

... The procedure is a success and, three months later, Charlie's IQ has reached 185. However, as his intelligence, education and understanding of the world around him increases, his relationships with people deteriorate.

... Charlie discovers a flaw in the theories that led Nemur and Strauss to develop their intelligence-enhancing procedure. Shortly thereafter, Algernon starts behaving erratically, loses his new intelligence, and dies. As Charlie does further research, he determines that he too will inevitably revert to his old condition.

From the Wikipedia entry I learned the novel is based on a short story that appeared years earlier and won the science fiction Hugo award. The full text is here (at least for the moment). I think the novel is stronger than the short story.

June 29 -- ... I phoned Landsdoff at the New Institute for Advanced Study, about the possibility of using the pair-production nuclear photoeffect for exploratory work in biophysics. At first he thought I was a crackpot, but when I pointed out to him the flaws in his article in the New Institute Journal he kept me on the phone nearly an hour. He wants me to come to the Institute to discuss my ideas with his group. ... That's the problem, of course. I don't know how much time I have. A month? A year? The rest of my life? That depends on what I find out about the psychophysical side-effects of the experiment. ...

One of my very favorite books, and the only one I can remember that ever actually made me tear up. I think there are a lot of people who find the prospect of mental decline to be more saddening, or more frightening, than the prospect of death itself, although it's probably more common among professional thinker types.

I agree, a great and memorable story. It reminds me of the sad (true) story of Lev Landau, a brilliant Soviet physicist whose intellectual life ended with a car accident in 1962.

A friend of mine has a family pug dog called Algernon. I'm not sure if it is any connection to this book.

Steve, new genetic study out with what seems to be a misleading headline. Sounds like the Lewontin fallacy?

A decline yes, but not back to the mind of a child.

"Flowers for Algernon" had a powerful impact on me too.

May I request a book review from you?

Po Bronson recently published Nurture Shock, and because of the psychometric evidence considered I think it is a book you would both enjoy reading and have intelligent things to say about.

Have fun with your upcoming visit to the cradle of "Western Civ"!

STS: I listened to a 30 minute podcast of Bronson talking about Nurtureshock with Leonard Lopate. Here is a link; note the video seems only 6 minutes so there is a longer podcast around somewhere. Bronson's points seemed pretty reasonable, but he seems to accept certain researchers' results unquestioningly, and I don't know why. (BTW, I liked his earlier books: Nudist on the Late Shift and What Should I Do With My Life?)

BTW, STS, I've enjoyed your comments immensely over the years -- send me an email sometime so I know who you are! :-)

does any know where this book is online...in text.... with a link that is working

hahahah its not that great of a book

i hate the book

i hate the book

Please ignore the comments by "Brayden" below who fails to even qualify his childlike statements. Flowers of Algernon is a clever book and subjects a man called Charlie who is a mentally retarded and is chosen to become the subject of a scientific experiment to try and make him more intelligent. This book observes how people react to him, both before and after the experiment and how his perceptions of the world change. It is both a very clever and very interesting read.