I'm off to Athens and Crete next week. The main purpose of the trip is to attend a meeting on quantum gravity, but I'm also looking forward to visiting this new museum: 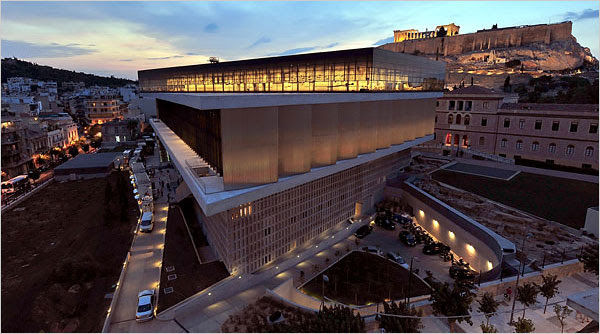 Now that they have an appropriate place for them, will the Greeks get the Elgin Marbles back from the British?

NYTimes: ... For more than 30 years, Greece has been working, through diplomacy and public relations offensives, to regain the Elgin Marbles, sections of a decorative frieze that adorned the Parthenon until Lord Elgin ordered them removed in the early 19th century, during his tenure as British ambassador to the Ottoman Empire. Years later, bankrupt, he sold them to the British Museum, where they have been a major attraction since 1816.

Today, almost two centuries on, many Greeks hope the opening of the museum will focus international attention on their country’s claim to the so-called Elgin Marbles, and put an end to Britain’s longtime argument that it is in a better position to look after those 2,500-year-old panels. Last week the Greek government turned down an offer from the British Museum for a three-month loan of the collection, because it came with the condition that the Greeks formally acknowledge British ownership.

“This is a nonstarter for any discussion,” Mr. Samaras said. “No Greek can sign up to that.”

The new museum, 226,000 square feet of glass and concrete designed by the New York architect Bernard Tschumi, replaces the old Acropolis Museum, a small 1874 building tucked into the rock of the Acropolis next to the Parthenon. The design, introduced in 2001, was meant to be completed in time for the 2004 Olympics, but dozens of legal battles — many having to do with some 25 buildings that were demolished to make room for it — delayed the process for years.

Eventually I suspect the Chinese, Egyptians and many others will recover their stolen national treasures from museums in Europe and the US.
Posted by Steve Hsu at 12:21 PM

Email ThisBlogThis!Share to TwitterShare to FacebookShare to Pinterest
Labels: travel

The Economist had an interesting article on this topic a while back.